Mohammed and Sadia Abdi are still getting used to the feeling of safety. 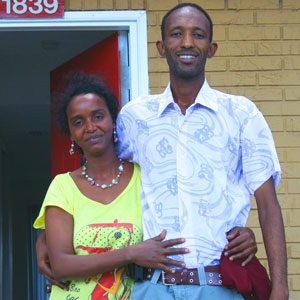 Mohammed and Sadia Abdi are still getting used to the feeling of safety. As Somalian refugees they suffered violence, hunger, imprisonment, and torture before coming to America in February of this year. With the help of Catholic Charities of Central Florida, they are beginning a new life in Orlando.

“Sometimes my wife is afraid when I work in the evenings” explains Mohammed. “When I get home I tell her, ‘Don’t worry. America is safe. There is no fighting here’.”

This security is a new experience for Mohammed and Sadia. In Somalia, a country with so much violence, every unknown person was a threat and feelings of uncertainty and panic were part of life. Their worst fears were realized on October 3, 2007, when a bomb was thrown into their family-owned restaurant, killing Mohammed’s father. Days later, when another bomb destroyed their home, they decided to flee in search of safety.

It became a journey spanning several countries and six years. Without documentation, the Mohammed and Sadia were unable to find help and were imprisoned as illegal aliens. Finally arriving at a refugee camp in Malta, their departure to the United States was delayed twice when Sadia became pregnant.

Mohammed spent the two extra years at the camp learning English, always looking ahead to the day they could leave for America. “In Malta, I didn’t have a lot of hope” Mohammed recalls. “But when I heard we would come to America, I had a lot. We will get a home. I will get a job. We will settle our family.”

Since their arrival to the U.S., the Refugee Resettlement program with Catholic Charities of Central Florida has been providing assistance. They helped Mohammed find a job at a local bakery and have arranged for housing and offered cultural orientation. For the 150 refugees resettling in Orlando over the past year, the welcome and guidance they receive from Catholic Charities is crucial.

“Before I came here I didn’t know who would help me,” says Mohammed. “What Catholic Charities does is good. When you come you don’t know anything and you need everything! You need someone to show you.”

In a recent address, Pope Francis commended the work done to aide refugees and called on the faithful to protect the dignity of all people.

“We remember that when we heal the wounds of refugees…we are practicing the commandment of love that Jesus has left us.”

The Pope went on to say, “I admire the courage of those who hope to gradually resume a normal life, awaiting joy and love to return and lighten their existence. We all can and must nurture that hope!”

Editor’s Note: On June 22, Catholic Charities of Central Florida will host a free family event of thanksgiving and celebration in recognition of World Refugee Day. Festivities include music, dance, world cuisine and arts and crafts. World Refugee Day will be held at St. Margaret Mary Catholic Church in Winter Park from 10 a.m. to 2 p.m.