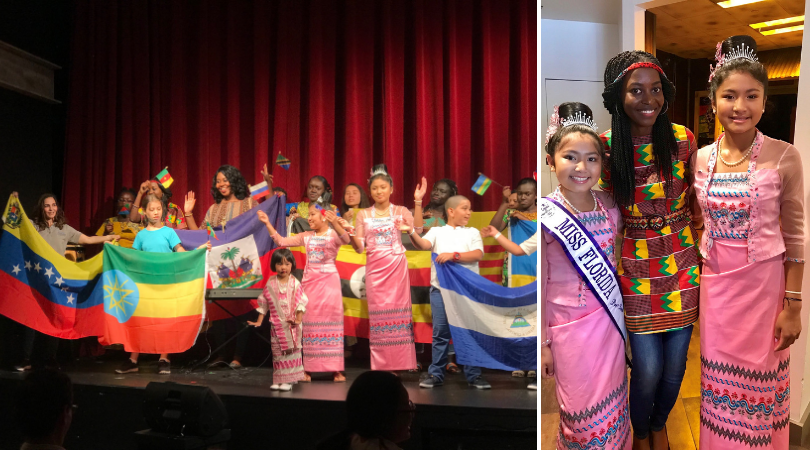 ORLANDO | Representatives of 20 countries recently gathered to share their food, music, culture and friendship as Catholic Charities of Central Florida transformed an Orlando church into a local United Nations.

Colorful flags decorated the room where children hurried to fill their “passport” with stamps from each country’s table. A Burmese dancer performed a traditional dance on stage while the scent of Colombian, Venezuelan, African and other international cuisines filled the air. June 22 was the celebration of World Refugee Day, a day that recognizes and applauds the diversity and value that refugees bring to the Central Florida community.

“Refugees enrich our culture with their values and cultural traditions,” said Deborah Vega, program director of Catholic Charities of Central Florida’s Comprehensive Refugee Services. “They are motivated and resilient and are in search of a safe place to call home.”

World Refugee Day is a favorite of Shaimaa Elawdan, an employment specialist with Comprehensive Refugee Services. Seven years ago, she was the one in search of a safe place to call home. Now when she sees newly arrived refugees, she remembers her own journey, with all of its uncertainties and hopes.

Born in Egypt, Elawdan was raised in a Muslim family. As she grew older, she became increasingly uncomfortable with the some of the religious practices, particularly the treatment of women. She entered into an arranged marriage, she felt distant from God, but was not encouraged to ask questions about the faith or to have any aspirations of her own.

“We were supposed to pray five times day,” Elawdan recalled. “I wasn’t able to follow that because in the middle of my prayers I would lose track of what I was saying. I didn’t have a connection to God.”

One day, a Christian friend gave Elawdan a video about Jesus. Waiting until no one else was home, Elawdan watched the video and was amazed at what she saw. She was astonished at the miracles and touched by Jesus’ compassion towards sinners. Unfortunately, the friendship ended after the video was returned. The friend’s mother stopped all contact between the two of them because of the danger of spreading Christianity in a Muslim country. For Elawdan, the door to Christianity had been opened.

In 2009, Elawdan received a scholarship to travel to London where she studied to be a teacher. At this point she and her husband had divorced and she continued to struggle with her religious beliefs. A new friend she met during her studies brought her to a cathedral one day. Elawdan said she still gets goosebumps when she remembers walking through the doors.

“This was my first time encountering a Christian place. As a Muslim in Egypt I couldn’t go in churches,” she explained. “I went to this cathedral and my mouth was wide open from the peace. I felt so comforted when I saw the cross. I didn’t understand anything about the religion, I just wanted to be there.”

Back home, Elawdan began to secretly practice Christianity in little ways. She would draw a cross on the wall with her fingers everywhere she went. She wore a bracelet in the shape of a cross under her hijab. Most importantly, she reconnected with a neighbor who had moved to the United States. When she asked why his family had moved away, he explained the ways Christians can be persecuted in the Middle East and offered to help her find a way out if she wanted to become a Christian, too.

“No one could know that he was helping someone convert,” Elawdan said. “They could burn his home and hurt his family. I asked him why he was helping me and if he was scared. He said, ‘No, because I want eternity for you.’”

With his encouragement and financial assistance, Elawdan obtained a tourist visa to travel to the United States. She left behind her apartment, her belongings, her car, her job and hardest of all, her 10-year-old daughter.

“I couldn’t take her with me,” said Elawdan. “I had no idea what I was going to do or where I was going to stay. I just prayed for God to take care of everything.”

Her prayers were answered. Once in the United States, Elawdan obtained asylum status. She connected with Catholic Charities who helped her find employment and eventually helped her bring her daughter over as well. While Elawdan was now openly practicing Christianity, she valued the freedom that allowed her to do so, and she let her daughter make her own decision about the faith.

“When my daughter came, she was expecting to see her Muslim mother,” Elawdan said. “I told her I would take her to the mosque if she wished, but I couldn’t go in with her. I didn’t want my daughter to be a copy of me, to be forced into marriage. I just want her to have free will. I didn’t force her to choose Jesus. She did that.”

Elawdan and her daughter were baptized together in 2014. She admitted she still has a lot of questions about the faith, but appreciates that now she is allowed to ask them.

In the United States, World Refugee Day is held just two weeks before Independence Day, when Americans remember that their nation was founded by those seeking freedom of religious expression and the rights of life, liberty and the pursuit of happiness.

“Refugees come to the U.S. looking to find stability for their families the same as any U.S. citizen,” Vega said. “Their presence reminds us of the values this country was founded on and provides those who choose to encounter and engage with them, the opportunity to welcome and provide respite to Christ within them.”

The U.S. Conference of Catholic Bishops calls on the American Church to recognize Religious Freedom week in the days before the Fourth of July, remembering the martyrs who died for practicing their faith and encouraging everyone to take action on religious liberty issues in this country and around the world. For Elawdan, being able to enter a church each week is something she can never take for granted. Her reason for coming to America can be summed up in one word: Jesus.

“I was having an easy life. My mom was cooking for me every day. She cleaned my house. I had money for traveling. But there is no purpose,” Elawdan said. “I didn’t want to live like that. I want to seek God. Without God I would be miserable. I left my home, but God gave me a home here. I have everything I need.”