Sister of the Holy Names of Jesus and Mary, Rose Christina Momm, was teaching in 1969 at Santa Fe Catholic High School in Lakeland when she heard an alarming statistic – a total of 5,000 people were incarcerated in Florida. More astonishing – only five psychiatrists in the entire state were available to help them. 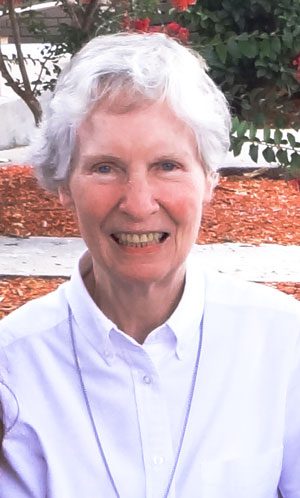 Visits weekly with the inmates at Polk County Correctional Facility

Sister of the Holy Names of Jesus and Mary, Rose Christina Momm, was teaching in 1969 at Santa Fe Catholic High School in Lakeland when she heard an alarming statistic – a total of 5,000 people were incarcerated in Florida. More astonishing – only five psychiatrists in the entire state were available to help them.

Those statistics essentially changed her life and helped shape her ministry.

“I was so upset to think that there would be so many people in prison,” said Sister Rose, now 78. “There are 100,000 now. But that was when I felt I was being called to do something with prisoners.”

Forty years later, Sister Rose, who works as an administrative assistant at Santa Fe, continues to walk into correctional facilities to spread God’s word and bring inmates a message of hope, peace and love. She admits she didn’t always agree with God’s plan and struggled with the idea of serving the incarcerated.

“That’s when I felt I was struck by a bolt of lightning,” Sister Rose said. “God must have said, ‘How about you grit your teeth and bare it and get out there and do something.’ So that’s when I went out.”

Sister Rose was born in Annapolis, Md., but her family moved frequently as her father was a naval officer. Before her senior year of high school, the family moved to Florida, where she attended a Catholic high school and discovered her vocation.

“In the nine months I knew the sisters there, in high school in Key West, I felt called to religious life,” said Sister Rose, who took her final vows in 1955. “I watched them and thought they really knew how to live.”

Sister Rose’s ministry began as a teacher. She has taught in the Dioceses of Orlando and neighboring St. Petersburg, as well as a short time in Albany, N.Y., where her community’s provincial home is located.

In addition to teaching, she has dedicated her life to the incarcerated and helping them realize God has not abandoned them. Over her 40 years of serving in the ministry to the incarcerated, she has met, visited and corresponded with many inmates. The first inmate to whom she ministered was named Steve, who had been incarcerated for his involvement in a murder.

“I felt a compulsion to pray for him, and I thought, maybe this is when I should go visit him,” Sister Rose said.

Terrified, Sister Rose entered the facility where Steve was held and spent a half hour with the man – whom she originally described as “vitally atheistic, very vulgar and unpleasant.” Steve was eventually sentenced to life at Florida State Prison in Raiford, in north Florida. Sister Rose wrote to and visited him there several times, offering hope and prayers.

Their correspondence helped as Steve experienced God while in his prison cell, and he began praying and reading the Bible.

Sister Rose also corresponded with another inmate, Norman Dean, who was in prison for armed robbery.  She received more than 1,500 letters from Dean, describing his feelings, emotions, prayers and experiences with God.

In total, Sister Rose has written to more than 24 inmates and visited 31 correctional facilities and work release centers in Florida. Sister Rose was honored in November with a certificate, signed by Deacon David Gray, director of the ministry to the incarcerated for the Diocese of Orlando, acknowledging her 40 years of ministry. The certificate was presented at Polk County Correctional Facility in Haines City, where she visits every Saturday night. She was honored in front of prison staff members, those incarcerated and the priests, deacons and laypeople who minister there. One inmate named Larry called her “a special person.”

“What would be more odd than a woman who stands no taller than my grandmother, and calmly enters a … facility unescorted and unprotected?” Larry wrote. “But then, what could be more loving?”

As she reflects on her time as a minister to the incarcerated, Sister Rose said she finds the most joy in helping those that need it and loving everyone unconditionally.

“These people seem to be so grateful for anybody who helps them,” Sister Rose said. “I find when I treat them kindly and I respect them, they feel comfortable around me as well. I have a lot of people who I love and that love me.”