Throughout his life, Bishop Norbert Dorsey touched many lives, through his ministry and service to the Church and, just as importantly, his friendships. As we fondly remember the third bishop of the Diocese of Orlando, we turn to six people who knew him best. Here are their personal reflections of the gentle shepherd of the diocese. 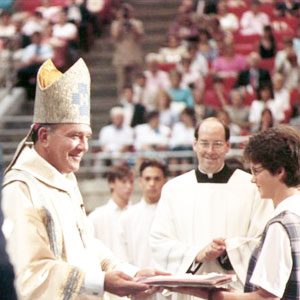 Throughout his life, Bishop Norbert Dorsey touched many lives, through his ministry and service to the Church and, just as importantly, his friendships. As we fondly remember the third bishop of the Diocese of Orlando, we turn to six people who knew him best. Here are their personal reflections of the gentle shepherd of the diocese.

This memory is during the time when Bishop Dorsey was at the Cathedral, and the Cathedral in Miami is a very difficult place. One night he came home, he found a homeless man who was a drug addict, who had broken into the kitchen of the rectory at the Cathedral. He was sitting at the kitchen table. He was all bloody because he had broken the glass, the kitchen window. And Norbert comes in, and just said simply, “Young man, what are you doing?” And he was covered with blood, all over the place. He said, “Get up here right away and wash off and clean up.” And he brought him over to the sink and washed his hands and he said, “You sit down there,” and he prepared a sandwich for him. And he simply said, “Next time you want something, you knock on the front door and I’ll let you in.” He brought him to the door, and of course he gave him something from his pocket, and he said, “Now, good night, and I hope you have enough to eat.”

Very Reverend Paul Henry, Rector, Basilica of the National Shrine of Mary, Queen of the Universe (has served as a priest in the Diocese of Orlando in 1968):

There is a anecdote that says I predicted that Bishop Dorsey would be named our bishop three years prior to his appointment. The truth is, everyone predicted he would be our bishop.

Bishop Dorsey came with an interesting background even before he was named Auxiliary Bishop of Miami. He was ordained as a Passionist priest, which allowed him to travel internationally. He traveled all over the world, visiting monasteries and parishes. This gave him a diplomatic approach to life.

A gift he brought to the Diocese of Orlando was the ability to delegate and facilitate. He had the ability to call forth the gifts in others, allowing them to be creative in their ministries. He was also forward thinking and was the first bishop in the United States to appoint a woman – Sister Lucy Vazquez, O.P. –as his Chancellor. That brought a lot of national attention to the diocese.

Bishop Dorsey was not overbearing. In fact, he was very congenial. He would begin each of his homilies referring to the congregation as the “beautiful people of God.” It did not matter if he was preaching at a Confirmation, at the funeral Mass of a priest or a priest’s parents, he always added a special warmth to his comments. He had the heart of a loving shepherd, and people were touched and affirmed by his loving ways.

The last public event he attended was last year’s Christmas concert at the Basilica of the National Shrine of Mary Queen of the Universe. He was filled with such joy. He told me he loved the event, especially because he had dedicated the Shrine 20 years ago. Bishop Dorsey had given Msgr. Harte tremendous support in creating the vision and ministry of the Shrine. He was a very generous man.

Bishop Dorsey was a good, kind, and gentle man, a gentleman in every sense of the word. His statistical accomplishments are well documented. This Diocese flourished under his leadership in many, many ways. New parishes, missions, and schools were established. Policies for the protection of children and vulnerable adults were developed and enforced. Faith formation programs for children and adults were updated and strengthened. Diocesan schools received Blue Ribbon recognition. A new residence for developmentally challenged adults was conceived and built. A Confirmation was held in the Orlando Arena, a vibrant witness to Central Florida of the living faith of this local church. Priests and permanent deacons were ordained, and lay ministers were commissioned. Much more could be said of his accomplishments, but that would not really capture who he was.

Bishop Dorsey was candid, honest, and caring, and never took the prerogatives of his office too seriously. In fact, he had a self-deprecating sense of humor that set everyone at ease and allowed him to laugh at himself. What was most important to him was the care of the people God had entrusted to him. He felt blessed and honored to be our Bishop, and he was grateful to Bishop Borders and Bishop Grady and to all who had helped to build this vibrant local Church. Bishop Dorsey knew this young Diocese already had a rich history, and he felt privileged to build on it. He was not one to seek the limelight, in fact, he was quite uncomfortable in it, but if you met him, you did not forget him. In all the years I worked closely with him I never once saw him abuse his episcopal authority, but there were countless times when he went out of his way to buy a bicycle for someone who needed one as their only means of transportation, to have the teeth of a young farmworker man fixed, or to pay for the body of an undocumented man or woman to be returned to his or her homeland for burial — so many countless acts of kindness that no one knew about and that exemplified the goodness of his heart.

I have two special memories of Bishop Norbert Dorsey.  One reminds me of his humility, another of the great encourager that he is.

Each year, the bishops of Florida travel to Tallahassee to celebrate the Annual Red Mass of the Holy Spirit for those serving in government.  There are many meetings with the governor and other legislative leaders during this time as well as the demanding schedule of events all surrounding the annual Catholic Days at the Capitol.  After one of these grueling days, after a dinner with the bishops and several other priests and religious in the area, when all others were enjoying the relaxation and conversation, I found Bishop Dorsey in the kitchen where he was washing the dishes and helping to clean up after the meal.  He had taken off his suit, was in short sleeves, and was clearly comfortable in that setting working alongside the good folks who had prepared our meal.

Always a great encourager, he on a number of occasions took time to write a handwritten note to me about difficult situations or issues in which I had been engaged on behalf of the bishops, sometimes helping to smooth over mistakes I had made, bolstering my confidence and lifting my spirits.

I have been reflecting on the blessings of my Ordination and Bishop Dorsey, and the one story that speaks to my heart and mind was a meaningful gift Bishop Dorsey gave me when I was ordained a priest 15 years ago on May 23. Bishop Dorsey was a member of the Passionist congregation. Growing up in Puerto Rico, the Passionist priests ran the parish my family attended. The priest who baptized me, Father Luis Elordi, was a fellow Passionist.

Years later, Bishop Dorsey was visiting Peru for a conference, shortly before my ordination to the priesthood and Father Elordi was his host. Father Elordi told Bishop Dorsey that he knew one of the men who would soon be ordained. Without saying anything to me, he surprised me by inviting Fr. Elordi to my Ordination. He even mentioned it in his homily when he said that never before had he ordained someone in the presence of the priest who had baptized him. My family will never forget this generous act, and I will always treasure the beautiful and wonderful gift Bishop Dorsey gave me as I embarked on my journey as a priest. While I was visiting Bishop Dorsey during his final days, I thanked him, not only for ordaining me, but also for such a wonderful gesture.

John Wettach, friend and Comptroller and later Chief Financial Officer of the Diocese of Orlando under Bishop Dorsey (1986-2000)

I admired Bishop Dorsey greatly. When he came to Orlando, he lived in the Passionist’s house on Lake Sue. When he moved to his present home, there were no furnishings in the house, so my wife and I had to help him get everything he would need. We are talking can openers, towels, dishes, furniture — everything. It was a great pleasure.

During this time, we got to know him very well. Bishop Dorsey was a lovely man who had a big heart. He was very talented and cared about everyone. He radiated goodness.

Plus he was a fine linguist, fluent in Italian and French. I remember one time, there was an accident somewhere in this area, and a couple from Italy who did not speak English was injured. Bishop Dorsey visited the woman in the hospital and spoke to her in Italian. His visit brought great comfort to her. He told me that he did not dare go visit the husband because if an Italian man saw a priest entering the room, he would think he was dying. He had such a great sense of humor.

Bishop Dorsey was such a warm and charming person and an important part of our family. My grandchildren adored him, as did all of us.