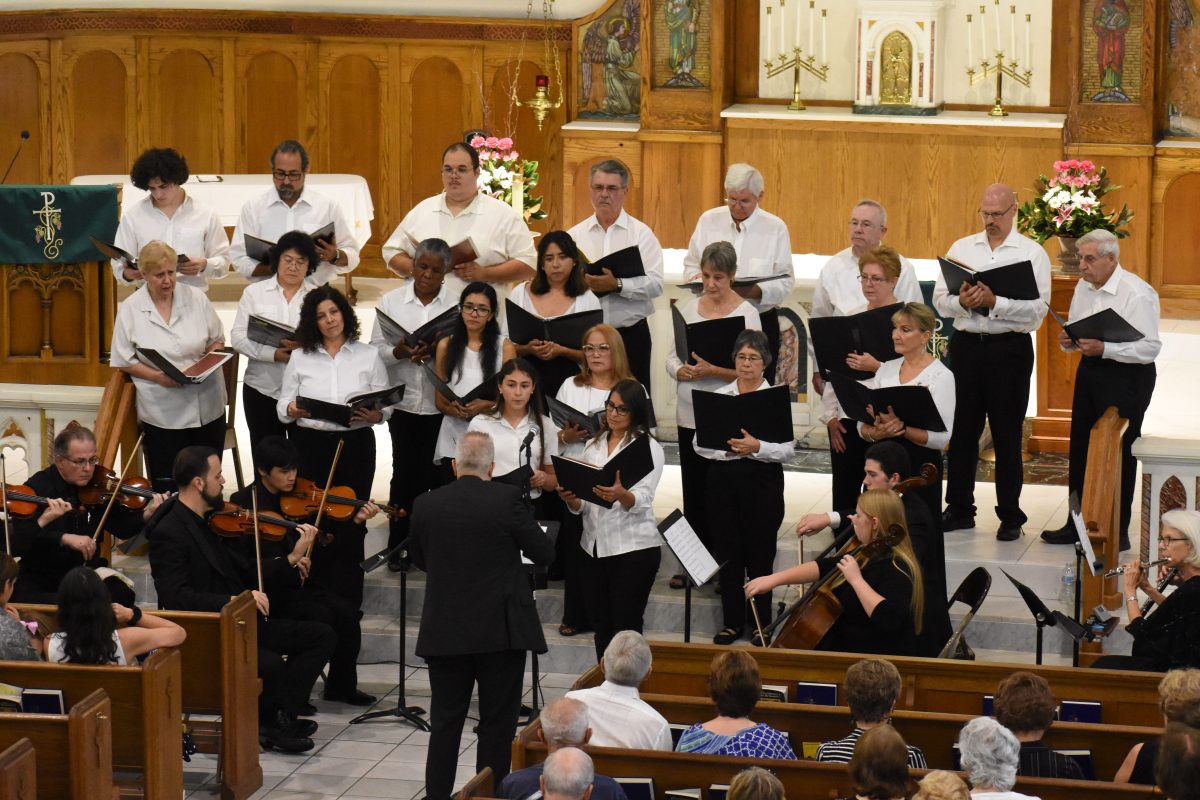 LAKELAND | Written to promote the gift of life, Louis Canter, pastoral assistant at St. Joseph Parish in Lakeland said his parish’s performance of Requiem for the Innocents, A Concert for Life was beyond his expectations. Sung by five soloists, a full choir, and orchestra, the piece included poems written by women who had abortions along with Scripture and narrations allowing pauses for reflection. Father Tim LaBo, St. Joseph’s pastor said, “It was powerful and moving.”

The concert included several other compositions, including Canter’s Kyrie for Peace, a response to the Pulse Nightclub massacre.

Canter wrote Requiem for the Innocents in 2016 , “…in response to the consequences of abortion—the death of a child, the loss some women and men feel and the need for reconciliation for those who performed or had abortions.” He notes, “The work explores all these things and looks to the God of love and mercy for hope.” Since performed throughout the U.S., Canter and music director/conductor Patrick Fleitz selected Respect Life month for its Lakeland premiere.

Opening the requiem is Jeremiah’s depiction of Rachel’s cry for the loss of her children. Sung by Teresa Fleitz, Rachel’s agony is piercing as “she refuses to be comforted.” The somber tone of drums and the men chanting “requiem” moves into a plea for mercy in the “kyrie.”

Parishioner and soloist Teresa Fleitz, who performed the part of Rachel said the reflection she sang got to her, “because as a woman, I understand it. To think about a baby you are not able to hold… I feel very honored to perform this. It was very difficult to sing.” The mother of four said she almost cried at the end.

Her son Dennis sang another solo. The 18-year-old noted the challenges of defending one’s beliefs in the secular world. “I wouldn’t be as bold to say this message, but I agree with everything it says,” he noted. “I fear being judged, but what I should fear is judgment on the last day; but it takes a lot of grace and power to be able to overcome that fear of others’ (judgment).”

The composition is interspersed with narration and reflections. Lis Burns does an outstanding job. Her narration begins: “We cry… for whom? For those who were not given the chance to live.” The final narration evokes a mother’s regret. ”Jesus, now I am asking. I know you hear my plea—won’t you take that child in your arms and hold my babe for me?”

Canter explains, “…in the middle of the work is the Pie Jesu (Sweet Jesus), sung by a child who stands for the millions of children lost by abortions. The end of the work is a dialogue between a mother and her lost child, where the mother asks for forgiveness, three times. The last time the child says she forgives her mother.”

Isabel is 12 and sings the solo of the child forgiving her mother. She felt honored to perform the solo and initially gave it no thought. The more she practiced; she felt its impact. “I began to think of what’s happening in the story and it’s sad to think it’s actually happening in real life… Being that child in a concert is just heartbreaking…”

Canter selected Patrick Fleitz and his choir to perform Requiem for the Innocents because he felt they could convey his intent through their gifts of singing and conducting. Fleitz says, “(The choir) cares about the music they sing. To a lot of them, this pro-life issue is important, so not only were they singing it, they were internalizing it. It was coming from their heart.”

Fleitz added it “was flattering that he (Canter) thought they had a choir capable of performing it and doing it justice. It’s not music unless it’s sung and people hear it. It’s an honor to bring it to life for him, the people of St. Joseph and beyond.”

By Glenda Meekins of the Florida Catholic October 23, 2019