Jen Bacon has always enjoyed going to Walt Disney World Resort. But on April 3, Disney World – and its iconic mouse – came to her school for a surprise visit, in recognition of her ministry to others. 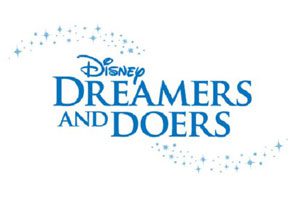 Jen Bacon has always enjoyed going to Walt Disney World Resort. But on April 3, Disney World – and its iconic mouse – came to her school for a surprise visit, in recognition of her ministry to others.

An eighth-grade student at Resurrection Catholic School, Jen was honored as a Disney Dreamer and Doer Shining Star. Each year, Disney World representatives identify several central Florida students for their service efforts. Jen received a trophy, medal and annual passes to Disney World for herself and her family. The presentation was made by Mickey Mouse and Disney’s Prize Patrol in front of her teachers and classmates.

As a Catholic school student, Jen said she understands the importance of community service well.

“I think about God, how He also inspired me to help people, and use what I’ve learned from Resurrection, bring it to the theatre and use good morals,” said Jen, who was among more than 100 middle school students who applied for Shining Star status.

Each year, students are encouraged to nominate themselves as a Disney Dreamer and Doer if they participate in community service. Jen said her teachers inspire her each day, and that inspiration led her to write an essay and become a nominee, but she didn’t expect that she would win.

“I was really surprised, actually,” Jen said. “I wanted to see if I could go far with it.”

Dr. Christopher Benedetti, principal, said the award was special for the Church of the Resurrection community but even more special for her family.

“Jen is a dynamic young lady who, on her own, makes these initiatives to serve the community,” Dr. Benedetti said.

Jen became the first student from Resurrection Catholic School to receive a Shining Star honor since Disney changed the award specifications. Currently, only one student is recognized at the distinct elementary, middle and high school levels in Orange, Seminole, Lake, Osceola and Polk Counties.

In addition to an annual pass, Jen and a family member were invited to participate in the world-renowned Disney Kids and Nature Celebration from April 12-14 at Disney World.