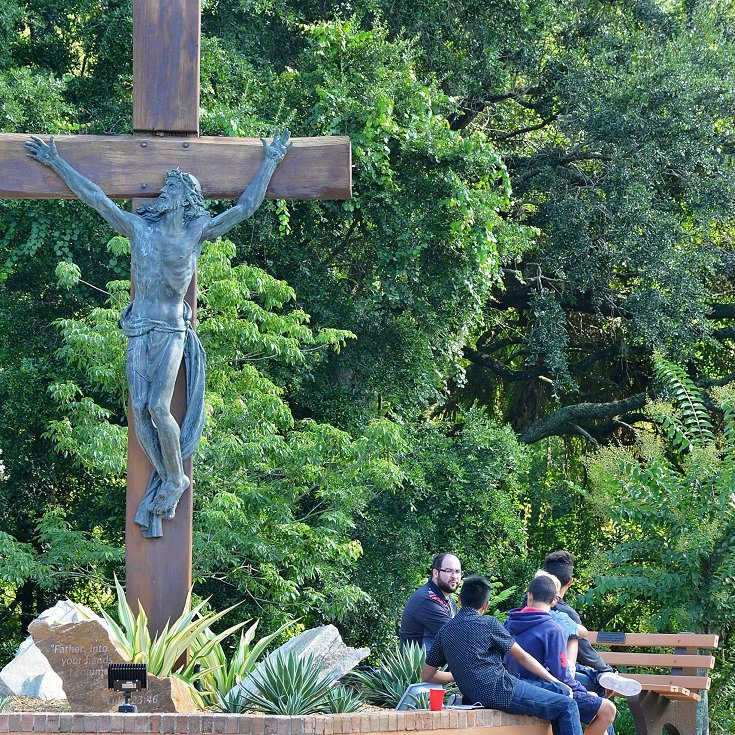 By Christine Commerce of the Florida Catholic – August 3, 2017

WINTER PARK | Gavin Foreman looks like any other teenager dressed in a black t-shirt and Nike sneakers but what makes him stand out from most 18-year-olds is his commitment in finding the path the Lord wants him to take.

Gavin, who attends Ascension Parish in Melbourne, joined 33 other young men at the San Pedro Spiritual Development Center in Winter Park, July 30 – Aug. 1, for the Quo Vadis Retreat sponsored by the Diocese of Orlando Vocations Office. Gavin said he decided to attend because he felt a calling to be a priest ever since he attended a Steubenville Youth Retreat.

“Before I came to this, I was very nervous with my discernment and thinking about being a priest is nerve-racking,” he said. “Now I look at it not as a bad thing, but that God is going to be there with you, and that others are going through the same thing, and God is there to help.”

Quo Vadis is a Latin phrase meaning “Where are you going?” According to tradition, Peter flees from crucifixion in Rome at the hands of the government and along the road, he meets Jesus. Peter asks Jesus, “Quo Vadis?” and He replies “I am going to Rome to be crucified again,” which then gave Peter the courage to continue his ministry in the city, where he was martyred by being crucified upside-down.

Francisco Ojeda, a seminarian at St. Vincent de Paul Regional Seminary, shared his story with the youth of how he met Jesus in prayer. He recalled being at a crossroads with a desire to go to seminary but also wanted to attend college.

“Prayer is such an important thing. Prayer is talking to God and that’s why he’s knocking on that door,” Ojeda said. “Will you stay in the darkness and let that door close or will you open it and let Christ come into your life and show you what he wants from you – the priesthood, married life, single life, His love for you.”

Thomas Coppola, seminarian and director of the Quo Vadis Retreat, said teenagers ages 13-18 were encouraged to attend the fifth annual retreat designed to help those entering either high school or college discern what God is calling them to do.

“It’s an opportunity for them to understand what living in relationship to God means and discovering their vocation, whatever that may be, based on that relationship,” Coppola said.

Carlos, 17, who was there with his brother and cousins, never had the courage to go to a three-day retreat, but his mother encouraged him. He said the retreat made him feel at home, and it was during Eucharistic Adoration that he felt a change within himself.

“I started doubting the love of God and Jesus, and this retreat made me feel that I am loved by God,” he said. “I would go to church, and it didn’t feel the same anymore. This retreat changed everything. It reignited my faith.”

Coppola said in the past, the retreat emphasized solely the priestly vocation, but now it focuses on all vocations, and that the most important thing is their relationship to God, which is fostered through prayer.

“The Lord knocks on your door, and we are the ones who open it, and when we open the door to Him, it’s a new nativity,” Coppola said. “He is trying to break into our hearts and dine with us in our own hearts.”

Gavin, who recently graduated from Eau Gallie High School, said he’s not sure where God will lead him but he plans to continue his discernment. He has considered being a father but during the retreat he realized as a priest he can be a father to an entire community.

“(As a priest), you’re everyone’s father, and you’re bringing Christ to everyone even though they’re not your biological children — they are your children,” said Gavin who encourages anyone considering priesthood to be open to it. “Don’t let your nerves get a hold of you. Just let God help you and ask Him for his guidance.”