At midday on May 24, the Holy Father received participants in the sixty-fourth general assembly of the Italian Episcopal Conference, to whom he delivered an address focusing on the challenges of the new evangelisation in a society increasingly distanced from God. 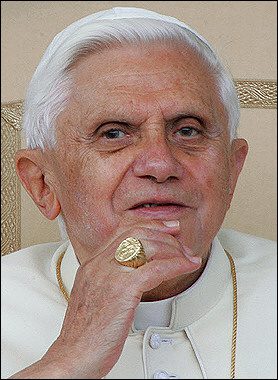 At midday on May 24, the Holy Father received participants in the sixty-fourth general assembly of the Italian Episcopal Conference, to whom he delivered an address focusing on the challenges of the new evangelisation in a society increasingly distanced from God. “Our situation requires renewed drive, aimed at the essential aspects of Christian faith and life”, he said. “At a time in which God has, for many people, become the great Unknown and Jesus is simply an important figure of the past, we cannot relaunch missionary activity without renewing the quality of our own faith and prayer. … We will not be able to win mankind to the Gospel unless we ourselves first return to a profound experience of God”.

The Pope began his remarks by recalling that this autumn marks the fiftieth anniversary of the opening of Vatican Council II, and he exhorted the prelates to implement its teachings in order to meet the social and cultural transformations of our time which, he said, “also have visible consequences in the religious sphere”. Societies of ancient Christian tradition are today characterized by secularism. Thus the spiritual and moral heritage which lies at the roots of the West “is no longer understood in its profound significance, … and a rich soil risks becoming an inhospitable desert”.

The Pope identified a number of worrying trends, including a drop in religious practice and diminishing participation in the Sacraments. “Many baptized have lost their identity. They do not know the essential contents of the faith, or believe they can cultivate that faith without ecclesial mediation. And while many look doubtfully at Church teaching, others reduce the Kingdom of God to certain broad values, which are certainly related to the Gospel but which do not touch the central nucleus of Christian faith”.

“Unfortunately it is God Himself Who remains excluded from many people’s horizon and, when not met with indifference, closure or rejection, discourse about God is relegated to the subjective sphere, reduced to an intimate and private affair which is marginalized from the public conscience. The heart of the crisis affecting Europe also arises from this abandonment, this lack of openness to the Transcendent”.

In this context, Benedict XVI highlighted the fact that “new methods of announcing the Gospel or of pastoral activity are not enough to ensure that the Christian message finds greater acceptance”. As the Council Fathers said, “we must begin again from God, celebrated, professed and witnessed. … Our primary task, our true and only task, remains that of dedicating our lives to the one thing that … is truly dependable, necessary and ultimate. Men live from God, from He Whom, often tentatively and unawares, they seek in order to give full meaning to lives. We have the task of announcing Him, revealing Him and leading others to meet Him”.

The Holy Father continued: “The fundamental condition in order to be able to speak about God is to speak with God, increasingly to become men of God, nourished by an intense life of prayer and molded by His Grace. … We must allow ourselves to be found and seized by God so as to help the people we meet be touched by the Truth. … The old and new mission facing us is that of introducing the men and women of our time to a relationship with God, to help them to open their minds and hearts to the God Who seeks them and wants to come close to them, leading them to understand that doing His will does not curb freedom; rather, it means being truly free, it means achieving true goodness in life.

“God is the guarantor not the competitor of our freedom”, the Pope added in conclusion. “Where space is given to the Gospel, and therefore to friendship with Christ, man realizes he is the object of a love which purifies, warms, renews, and makes us capable of serving mankind with divine love”.