Saints of Mercy Show Us the Way 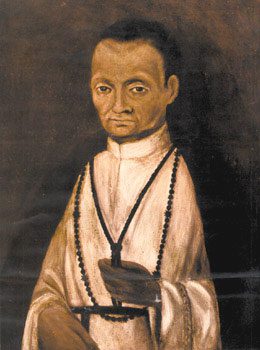 St. Martin de Porres was born in Lima, Peru, on December 9, 1579. He persevered through discrimination and relied on his faith to live a life of exemplary mercy and generosity towards others. (STOCK)

During this Jubilee Year of Mercy, how do we become merciful like our heavenly father?

The saints of the Church can be our guide! They lived during complex times that challenged them in many ways. They overcame daily struggles with faith. During the last few months The Florida Catholic has highlighted saints of mercy who blazed trails showing us the path to heaven with merciful hearts. These men and women have demonstrated works of mercy, they depended on God’s love and grace to make this possible.

This saint reminds us of the corporal acts of mercy to feed the hungry, give drink to the thirsty, clothe the naked, shelter the homeless and visit the sick.

St. Martin de Porres was born in Lima, Peru, on December 9, 1579. His father was a nobleman and his mother a freed slave from Panama. He was of mixed race. Although doors to many opportunities were closed to him because of his skin color, he persevered through discrimination and relied on his faith to live a life of exemplary mercy and generosity towards others.

After his sister Juana, was born in 1581, his father left the family. His mother took in laundry to support the children. When she could no longer support him, St. Martin de Porres was sent to a primary school for two years, then to a barber/surgeon to learn medical arts. He spent hours in prayer every night.

By law in Peru, individuals of mixed races were not able to join religious orders. St. Martin de Porres asked the Dominicans of Holy Rosary Priory in Lima to allow him to join as a donado, or volunteer, who performed the most menial of tasks in the monastery in exchange for wearing the habit and living in religious community. When he was 15 years old, they accepted him as a servant.

While at the monastery, Martin continued to practice his medical arts. He also took on whatever tasks needed to be done in the kitchen, the laundry and cleaned the monastery. After almost a decade at Holy Rosary, the prior, Juan de Lorenzana, decided to allow Martin to take vows as a member of the Third Order of Saint Dominic. Holy Rosary was home to an estimated 300 men at the time, not all of whom were happy with this decision.

When Martin was 34 years old, he was made responsible for the infirmary. He served there until his death at age 59. Miraculous cures began to be attributed to him. Brother Martin would explain with a smile,” I merely take care of you, while it is God who heals you.” He also ministered to individuals outside the monastery, regardless of their social status or income, sometimes bringing healing with only glasses of water.

When an epidemic hit Lima and 60 friars fell ill, they were removed to a distant and locked section of the abbey. Martin is said to have passed through locked doors to care for them, a phenomenon that was reported several times.

One day Martin brought an aged beggar off the streets, covered with ulcers and with almost no clothing, into his own bed.  That action was not looked upon kindly by one of his brethren. Martin said “Compassion, my dear Brother, is preferable to cleanliness.”

St. Martin de Porres was particularly sensitive to the plight of orphans, most of whom would wander the streets begging with no hope of a future. He founded the first boarding school of its kind in the new world. Named El Asilo de Santa Cruz, it took in both boys and girls who had nowhere else to turn.

Martin died on November 3, 1639. The Dominican lay brother by then had become admired and respected not only by his fellow Dominicans, but by many in society outside of the priory.

How can you follow St. Martin de Porres’s example to give freely of yourself to others?

The mission of Catholic Charities of Central Florida is to provide vital societal services to people in need regardless of their religious, social or economic backgrounds, to improve the lives of individuals, families and the community. Its vision is that every person’s basic human needs are met through love and empowerment. It honors a non-discrimination policy.

Volunteers are needed to promote justice and advocacy, help alleviate hunger and prevent homelessness, provide access to healthcare, care for immigrants and refugees, and assist with the needs of its community partners.