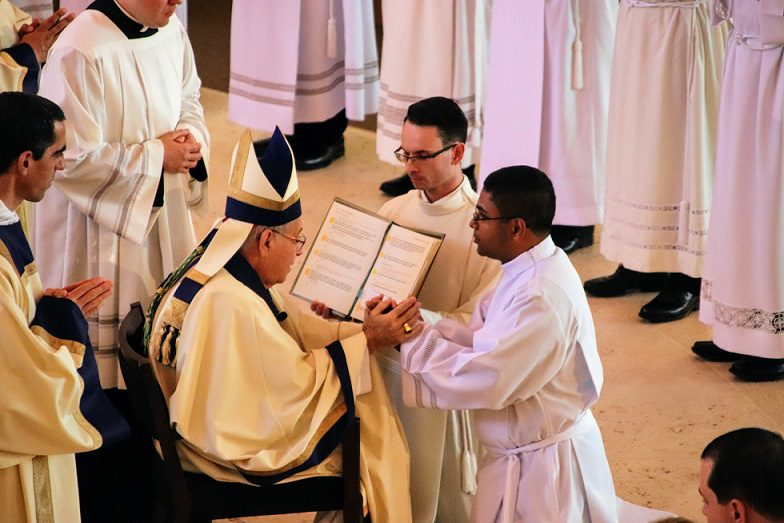 St. Joan of Arc Parish in Boca Raton was filled with family and friends who came to see 13 seminarians from throughout Florida be ordained transitional deacons, including the Diocese of Orlando’s own Derek Saldanha.

Each year, the bishops of the Florida dioceses alternate as presiders. As Bishop Felipe Estevez of the Diocese of St. Augustine laid hands on Saldanha, the seminarian recalled, “I felt very joyful to have persevered and made it through all these years. I also feel very humbled to be chosen by God and by the Church to serve the Diocese of Orlando.”

Originally born and raised in India, Saldanha came to the United States in 2009 where he attended Franciscan University in Steubenville. After graduation, he entered St. John Vianney College Seminary, Miami. He is currently finishing his formation in St. Vincent de Paul Regional Seminary, Boynton Beach. The family’s home parish is Holy Name of Jesus in Indialantic.

Deacon Saldanha will serve St. John Vianney Parish in Orlando throughout May and June. Afterward, he will serve at a parish near the seminary on weekends for the remainder of his diaconate year, until his ordination to the priesthood in 2019.