Deacon Derek Saldanha reflects on his journey to priesthood 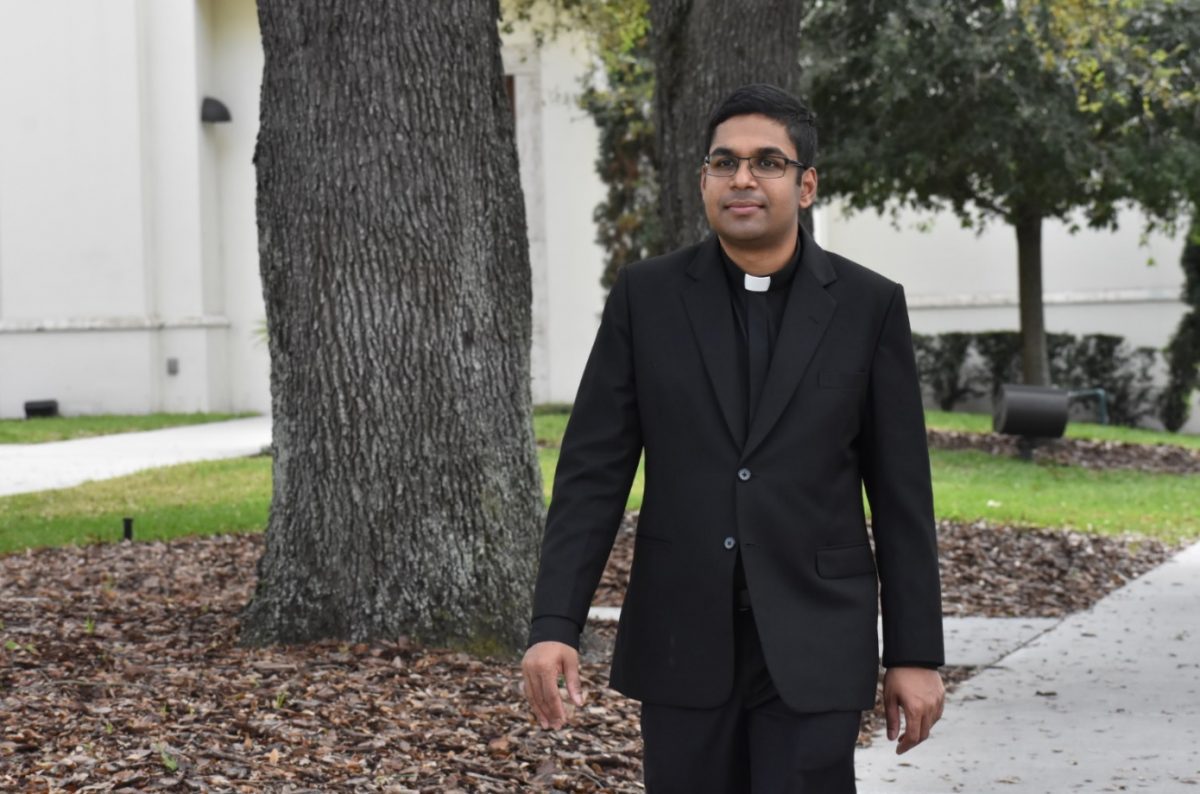 ORLANDO | Born and raised in India, Transitional Deacon Derek Saldanha, of Holy Name of Jesus Parish in Indialantic, was Ordained on May 25 at St. James Cathedral. Deacon Saldanha credits St. Francis Xavier for his vocation because he evangelized the small state of Goa, where Saldanha’s family finds its roots.

“St. Francis Xavier is my favorite saint because he is the saint who evangelized the land that I come from,” said Saldanha. “He was zealous for the Gospel. The moment the Lord touched his life, when he was studying at the University in Paris, he began boldly preaching and that’s why I am here; that’s why my family is here; that’s why the people from my ethnicity are Catholic, because of his zeal.”

The transitional deacon came to the United States in 2009 from the bustling city of Bombay. Raised a devout Catholic, he enjoyed the benefit of a faithful family. His mother taught catechism classes and the family prayed the rosary together regularly. But it was not until Saldanha came to the U.S. to attend Franciscan University in Steubenville, Ohio that he began to consider the priesthood.

“Growing up I had a lot of friends who were priests – my principal and assistant principal at school. There were seminarians who came to work with youth groups (at our parish)… and so I saw the life of a priest from very close,” he recalled. “But it was not until my time at Franciscan University where I really saw the sacramental aspect of the priesthood; where I realized that it is only through the hands of the priest that we receive the Eucharist, that we are able to be reconciled with God, through the Sacrament of Reconciliation. And that’s when I felt very strongly that this is how the Lord me wants me to serve Him. This is how the Lord wants me to help people, by bringing them back in relationship with Him through the power of the Sacraments.”

Saldanha arrived in Central Florida in 2011, after completing his master’s degree in educational administration. Already discerning a vocation, he joined his parents and brother who had recently arrived in Melbourne. The family was glad to be reunited. They still pray the rosary together when they can. “Faith has played a very important role in my upbringing,” he said. “And I think that’s what has helped me discern this call in my life.”

He also acknowledges the role of his parish community. “The people of Holy Name of Jesus and priests and deacons have been a very integral part of my formation. I did a Christ Renews His Parish retreat the year before I entered the seminary. That was a great blessing in my life. The people always inquire about how I am doing and it’s very heartening to know that I have the love and the support of my parish community.” It was through his parish that he learned of an opportunity to visit the seminary soon after his arrival. The experience connected him to the Office of Vocations and confirmed his desire to become a diocesan priest and his parish has accompanied him through the entire journey.

Deacon Saldanha had a younger sister who died at the age of 10 from leukemia. Although the loss was difficult, Saldanha found strength in his faith. “My favorite Scripture is Philippians 4: 13, ‘I can do all things through Christ who strengthens me’, because Jesus Christ is Lord and, as I’ve has seen in my own life. Whenever my life has been centered around him, indeed I have been able to do whatever he asks of me.”

Concluding his seven years of formation between St. John Vianney College Seminary in Miami and St. Vincent de Paul Regional Seminary in Boynton Beach, Saldanha looks forward to his Ordination. “As a priest I look forward to journeying with the people, helping them in their own relationship with God,” he said. “That they may come to discover Christ who is the way, the truth and the life. And in doing so, receive the peace and the joy that can come only from him… and I hope to preach the word of God with zeal, with meaning, giving it my everything.”

By Glenda Meekins of the Florida Catholic – March 2019