‘I have learned more about Christ in a fun way’

At San Pedro Spiritual Development Center, a group of middle school campers strategically positioned themselves on a wooden “teeter totter,” a large platform balancing on a wooden axle. Their goal was not to allow either end of the platform to touch the ground while they sang a camp song in its entirety. 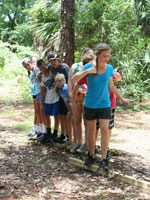 ‘I have learned more about Christ in a fun way’

At San Pedro Spiritual Development Center, a group of middle school campers strategically positioned themselves on a wooden “teeter totter,” a large platform balancing on a wooden axle. Their goal was not to allow either end of the platform to touch the ground while they sang a camp song in its entirety.

“The object of this exercise is to teach them teamwork,” said Mary McDaniel, director of the camp program. “It can be done. They need to work together to accomplish their goal.”

Twenty minutes later, they did just that.

The activity was one of many during San Pedro’s Summer Scripture Camp, a one-week day or overnight camp for students from grades 4-12.  The camp activities include the typical swimming, archery, arts and crafts but also feature activities infused with spiritual and moral lessons. This year’s topic was centered on the theme, “The Social Justice League: Saving the World One Peace at a Time.”

McDaniel, who has been running the camp for the past nine years, said the goal of this year’s summer program is to show the children how to make the world a better place to live, not only for themselves, but more importantly for those less fortunate.

After the students concluded their outdoor adventure, they joined their peers in the community center where their lesson for the day focused on hunger and poverty. Campers learned about Catholic leaders – Pope John Paul II, Blessed Mother Teresa and Dorothy Day – who have made a difference in the lives of the less fortunate with their social justice efforts.

All eyes were on the camp leader, Misty House, as she stated several sobering statistics. Using seven volunteers, she broke down the world’s eating habits: one in seven of all people go to bed without eating at all; three out of seven have one meal a day; two out of seven have more than enough food available; and one out of seven could have eaten more in a given day than the entire group combined.

“Pretty shocking isn’t it?” she said, as murmurs filled the room. “It would be simple for the one group in seven to share their resources but when we expand that and multiply that to the size of our population, we don’t do a very good job of sharing our resources. And that is what we are called to do.”

House tied the lesson to the works of Day – a 20th century advocate for the poor – by reading a column Day wrote in 1952 for the newspaper, The Catholic Worker.

“How can we say to the poor, ‘Rejoice and be exceedingly glad, for great is your reward in heaven,’ when we are living comfortable in a warm house sitting down to a good table decently clothed?” Day wrote. “We need always to be thinking and writing about poverty, for if we are not among its victims its reality is far from us. We must talk about poverty because people insulated by their own comfort lose sight of it.”

“In our eyes, we go through hard times,” House continued, using her own words this time. “But we need to recognize that there might be harder times out there. We need to pray to understand what God is calling us to do to help.”

The children, divided into five groups, demonstrated their understanding of the lessons through skits on social justice.

“I have learned a lot this week,” said Cole, one of the campers. “I have learned we must always remain in our faith and help others build their faith.”

Another camper, Jenna, echoes her teammate’s sentiments. “I have learned more about Christ in a fun way.”

McDaniel said throughout the years, the summer camps have made a profound impact on many young lives. In fact, most of the volunteer camp counselors were once campers themselves. Counselor Lindsey Goode was eight years old the first time she attended San Pedro Camp. Now she is 22 and one of the camp’s co-directors.

“I got a lot out of it and wanted to give back,” she said.

This year, the camping season at San Pedro began on June 10 and continues through the last week of July. Each year, the camp typically attracts 300-350 young people.

“The experience for the young people is just amazing, especially in the high school years,” McDaniel said. It gives them a safe place to come back to in the summer.”