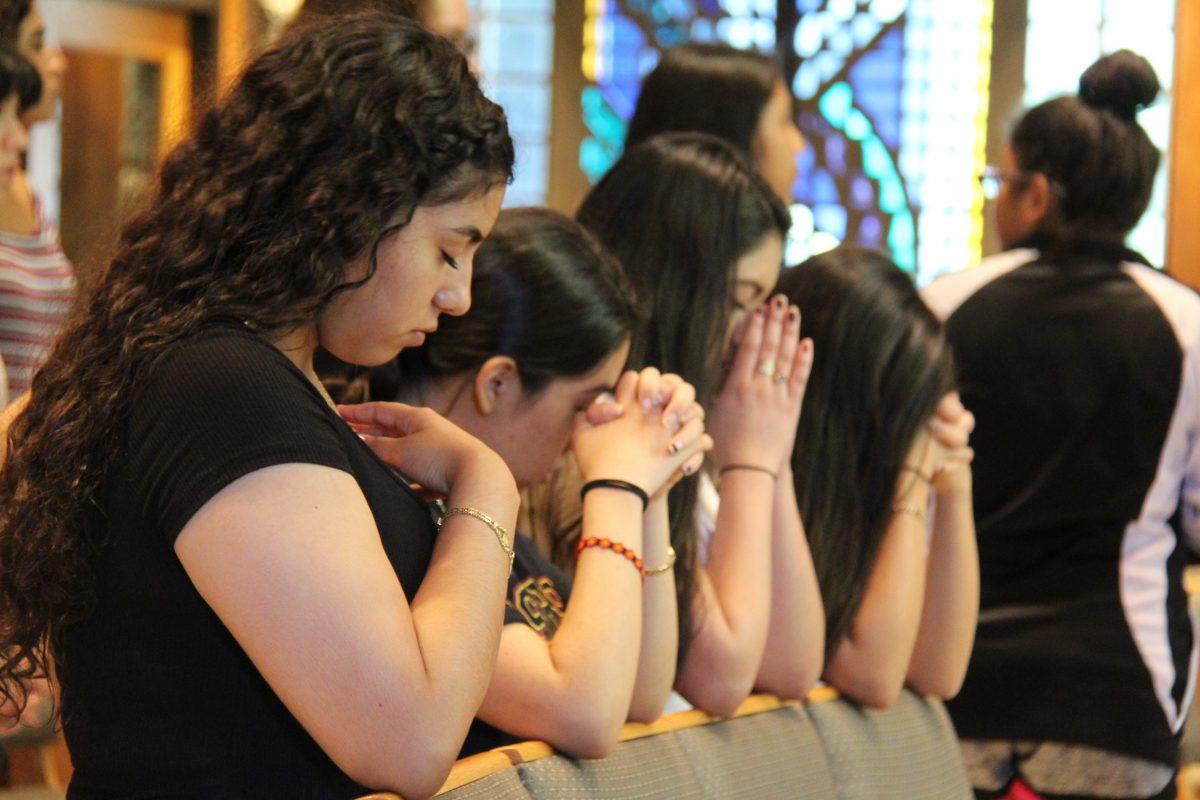 Fifty-four girls from throughout the diocese attended Fiat-Let It Be Done retreat at San Pedro Center April 27-29. PHOTO BY GLENDA MEEKINS

WINTER PARK | Arianna is 16-years old. She has been going to the Fiat Days retreats at San Pedro for three years now. Curiosity to meet an actual nun is what first drew her to the two day retreat offering girls ages 13 to 18 an opportunity to learn about and discern their vocation to marriage, single or religious life. She is one of 54 girls who attended the most recent retreat April 28-29.

“I was stand-offish when I first got here. Middle school was rough and there were things going on at home,” said Arianna. She did not even believe in God at the time, or so she thought. But one of the sisters began to share what her life was like as a young adult, running track and the sports in which she participated. It was a turning point for her as she began to see that religious are “normal”.

She was in eighth grade when two sisters reached out to her and helped her open up “just a little”. She did so in Eucharistic Adoration and since then Arianna says, “It has never been the same. Words can’t describe it. I always thought Adoration was so boring—you’re staring at a piece of bread. But now, every time I cry.” She has been inviting friends to Fiat Days ever since.

Arianna’s experience is not uncommon. Savanna Shurman is one of eight college students forming the core planning team for Fiat Days. She said the team reviewed the retreat plan three years ago and realized, “You can’t know where God’s calling you if you don’t know God yet.” That is the situation facing many of the girls that come. The retreat provides an opportunity for these young girls to look at Mary’s fiat, or “yes”, and discover a more intimate relationship with Christ through various activities, from Eucharistic Adoration to sports and games. The desire is that “they know who they truly are and how beautiful they are,” said Shurman. “The weekend is about showing them what a treasure they are and that they are called to greatness and to be leaders of the Church.”

Shurman said the age range is good “because these girls are defining their own faith and journey with the Lord before they go off to college and really have to take on all that responsibility themselves.” Topics covered ranged from identity and chastity to prayer and the vocation stories of seven religious sisters from various orders.

Most Precious Blood parishioners Anna and Peyton shared their experiences. Anna, age 16, said the retreat was “a break from school and all the pressure in life.” This is her second year attending. Peyton, age 14 said her mom showed her the flyer and she wanted to come. She was seeking “a deeper relationship with God.” Peyton said the talks were the most helpful because she related on a personal level. Anna agreed. She said the retreat helped her be more open-minded. She recalled one girl who came and was not Catholic and thought that was brave of her. Another participant had just converted to Catholicism with her entire family. “It was cool to see my faith through other people’s eyes and perspectives,” said Anna.

Peyton said the retreat has helped her appreciate God more and see all that He is doing in her life confirming Shurman’s point, “If you give God a whole weekend of time and just open yourself up a little bit, God rushes in and does transformative things.”