Pope Francis will make an apostolic trip to Rio de Janeiro, Brazil from 22 to 29 July of this year on the occasion of the 28th World Youth Day (WYD). 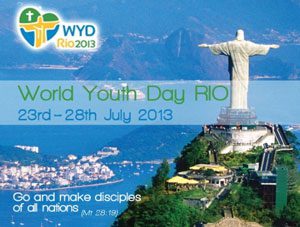 Pope Francis will make an apostolic trip to Rio de Janeiro, Brazil from 22 to 29 July of this year on the occasion of the 28th World Youth Day (WYD).

The Pope will depart from Rome’s Ciampino Airport at 8:45am on 22 July and will arrive in Rio de Janeiro around 4:00pm (local time). The welcoming ceremony will take place an hour later in the gardens of the Guanabara Palace, seat of the state’s government, where the Pope will be received by the president of the Brazilian Republic.

Until Wednesday, 24 July, the Holy Father will reside at the Sumare Residence in Rio de Janeiro. That morning, at 8:15am he will travel by helicopter to the Shrine of our Lady of Aparecida where he will celebrate Mass. After lunching with the bishops and seminarians of the province at the Bom Jesus Missionary Seminary, he will return to Rio de Janeiro by helicopter. That evening he will visit the St. Francis of Assisi of the Providence of God Hospital.

On Thursday, 25 July, the Pope will receive the keys to the city of Rio de Janeiro and will bless the Olympic flags at the City Palace. That same morning he will visit a community in Varginha (in the Manguinhos neighborhood of north Rio de Janeiro). That evening there will be a welcoming ceremony by the youth along the Copacabana beachfront.

On Friday, 26 July, the Pope will hear the confession of some youth participating in the WYD at the Quinta da Boa Vista Park at 10:00am. At 11:30am he will meet with some juvenile detainees in the St. Joaquim Palace of the Archbishop. From the central balcony of that palace, the Pope will pray the Angelus at noon. At 12:15pm he will greet the organization committee and patrons of the 28th WYD and then will have lunch, still at the Archbishop’s Palace, with a group of youth. At 6:00pm a Via Crucis will be held with the youth along the Copacabana beachfront.

On Saturday, 27 July, the 28th WYD will open with Mass celebrated with the bishops and with priests, religious, and seminarians in Rio de Janeiro’s St. Sebastian Cathedral. After that, the Pope will meet with Brazil’s leaders at the Municipal Theatre. Upon that meeting’s conclusion he will have lunch with Brazil’s cardinals, the presidency of the National Conference of Bishops of Brazil, bishops from the region, and the papal entourage in the refectory of the Sumare Study Centre. At 7:30pm a prayer vigil will be held with the youth at the Campus Fidei of Guaratiba.

On Sunday, 28 July, the Pope will celebrate Mass for the 28th WYD at the Campus Fidei. That afternoon he will meet with CELAM’s (the Latin American Episcopal Council) coordination committee at the Sumare Study Centre. The Holy Father will leave Sumare shortly before 5:00pm to meet with the WYD volunteers and, at 6:30pm, the pontiff’s farewell ceremony will take place at the Galeao–Antonio Carlos Jobim International Airport. The Pope will take off from Rio de Janeiro at 7:00pm and his plane will land in Rome on Monday, 29 July, at around 11:30am.