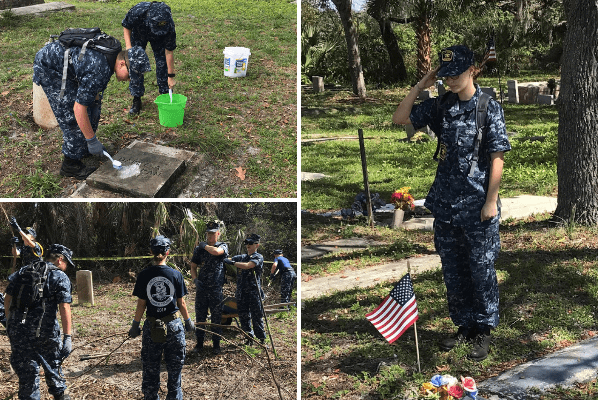 MELBOURNE | The David McCampbell Battalion Naval Sea Cadets found a new home this past fall at Melbourne Central Catholic (MCC) High School. Forming part of the battalion are three MCC students who are learning about leadership, honor, and courage and how those virtues translate to faith in action.

Deacon Stokes’ son joined the team in the 8th grade and has since risen to 2nd class petty officer. The sophomore at MCC said, “Being in a leadership role is good because I’m able to help people who might not know what to do. Sea Cadets is a hard program. It’s pretty much the military. There’s a lot to learn and I can help guide them and shape their core values.”

“There is no requirement that a sea cadet pursue a military career; however, if they choose to, they can enlist in the Navy as an E-3 (seaman), the Marines as an E-2 (private first class),” explained Deacon Stokes. “The Army, Air Force and Coast Guard will evaluate the cadet’s training record to determine whether to offer an advanced standing.” He added, “Sea cadets are often given special consideration when seeking an ROTC scholarship in college or an appointment to one of the military academies.”

Destiny, a junior at MCC, is hoping her participation will do just that. She is applying to the Naval Academy as well as for a Naval ROTC scholarship because she wants to join the Navy as either a Naval Aviator or Intelligence Officer. However, she admits the Navy was not always her dream. “I was unsatisfied with what I thought I was going to be,” she said. “Then it came to me one day, what if I join the Navy?” She looked into it, prayed about it and realized “that is what God was calling me to do.” The venture gives her a preview of that experience.

The Naval Sea Cadet core values are honor, courage and commitment and they translate to her daily living. “I apply these principles to my life in the way that I stand up for my beliefs at school and in my daily life and how I make my decisions,” said Destiny. “Each one of those decisions aren’t always the popular decisions. My faith definitely guides me.”

Teddy began the program about one year ago. “I’ve always been interested in the Armed Services – just the self-discipline and teamwork approach to accomplishing tasks that military personnel possess are qualities that I wanted to continue to develop. I’ve been a part of different organizations at MCC – student government, football and lacrosse – and I’m always trying to become a better leader for my peers and teammates. The Sea Cadets program had all of that,” he said. The junior is discerning attendance at various military academies. He is planning a career in some type of chemistry or engineering and hopes to continue the program in a leadership role once in college.

One of the things Teddy likes about the program is the care given to community. He noted a recent effort to clean gravesites and property at J.N. Tucker Memorial Cemetery, also known as Shady Oaks Cemetery in Melbourne. The burial site, founded in 1912, is home to numerous veterans. Teddy and his peers spent a day clearing and washing tombstones buried by vegetation and replacing erecting fallen markers. “The community service activities we do further enrich my Catholic faith as well as ease me into the service aspect,” he said.

“I’ve always seen part of my ministry as a deacon as our call to raise our children properly as faith-filled—as all adults are called to do,” said Deacon Stokes. “I see cadets fitting in that way really well. As an organization, it is committed entirely to raising a good group of kids with good character and strong leadership skills. It goes right in line with our call as Christians to raise our children well, but also with my call as a deacon to be a good role model for young people, making sure they grow up with a proper moral compass.”

The U.S. Naval Sea Cadet Corps is a Congressionally Chartered youth organization founded in 1962. It is sponsored by the U.S. Navy and the U.S. Coast Guard. As of 2018, there were 394 individual units in 46 States, Guam and Puerto Rico, with nearly 12,000 Cadets.