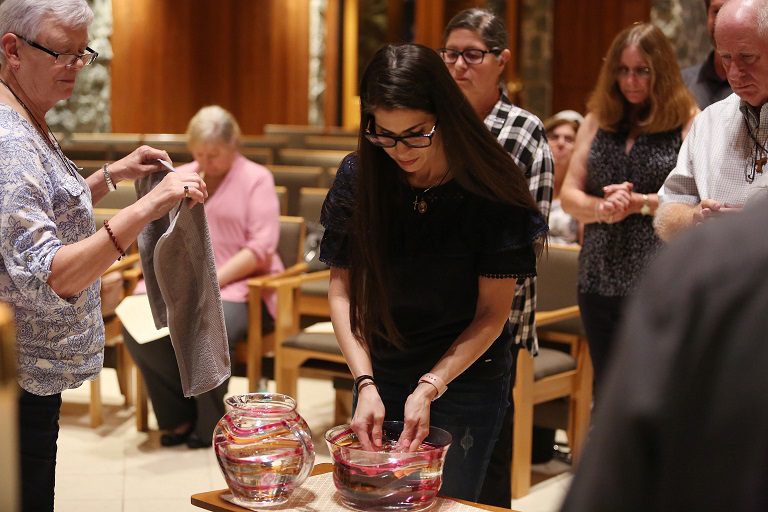 Religious order and secular Franciscans celebrate the Transitus of St. Francis of Assisi on Oct. 3, the eve of his feast day. The “passage” from earthly to eternal life calls to mind the Last Supper in the breaking of the bread and washing of the hands. (STEPHEN DOWELL)

ORLANDO | The beauty of vocation is that it can take many forms. Yet most Catholics are unaware that vocations go beyond Holy Orders or the Sacrament of Marriage and extend into secular orders. This series will explore the secular orders within the Diocese of Orlando over the next year.

Secular orders in the Catholic Church began to take form in the early 13th century. As laity increasingly desired to live lives of piety in concert with the ideology of certain orders which resounded within them, the secular or lay orders were born. Today, the oldest existing secular order is that of the Secular Order of Franciscans, who follow the way of life of St. Francis of Assisi. There are more than 400,000 worldwide and 15,000 in the United States.

The Franciscan secular order developed over time. After St. Francis of Assisi established the Order of Friars Minor, St. Clare wished to adopt the Franciscan way of life and came to Francis. He then formed a Second Order – the Poor Clares. As growing numbers of married laity sought to serve, St. Francis created the Brothers and Sisters of Penance, officially becoming an order in 1221, after his death. Today that order is called the Secular Franciscan Order (SFO) and is formed of laity – single and married.

Unlike priests and religious, seculars make professions or promises, not vows. They become part of an order and pledge to live by a “rule” of life. Unlike deacons, seculars may change their station in life, from single to married, even after they make their profession. Distinguishing them from associations is a required formation as they become part of an order of the Church, often working together with vowed clergy and religious. Because it is a great commitment, the process from orientation, to inquiry, candidacy and final profession can take several years.

For most people, the call to a secular order begins with a longing or void. Both Jeanne and Tony Walter were always devout Catholics, but felt that something was missing. Jeanne explored other secular communities, and Tony even discerned entering the diaconate. Then Jeanne attended a Franciscan Hermitage Retreat at San Pedro Spiritual Development Center, in Winter Park, and knew this was where her heart had led her. After sharing her experience with Tony, they began their formation and became professed in 1992.

Most Catholics think of St. Francis as the saint of animals and creation. The couple soon discovered “there was a much deeper spirituality than just the ecology aspect,” said Tony. “Simplicity was a part of it. The spiritual idea that having things is okay, but things don’t have you.” Thus began the simplification of their lives. “The irony of it all is that it seems that the more you try to simplify, the more complicated it gets,” admits Jeanne.

“The prayer and quiet times of hermitage and being active with the poor especially enthused Jeanne,” recalled Tony. “For me, it changed my outlook on a lot of different things – the work I was doing for Lynx at the time and Seminole County. It changed my whole outlook on how I approached what I was doing so it became less stressful, even though it was still stressful. I tried to focus on it more as a purpose in life than just a job. I think what I learned about myself and my relationship with God is probably the biggest thing.”

Jeanne was a nurse at the time and soon left her hospital job to work with H.O.P.E. Team in Orlando, an outreach to the homeless community. She spent eight years caring for the poor in the woods and on the streets. The Walter’s three children were in high school and college then and often joined the couple in helping distribute food during the holidays. Later she went to Pathways to Care in Casselberry, a rehabilitation facility for the homeless.

In 2009, they moved to DeLand with their son, Ben, and began organic farming. The concept was familiar as Tony was raised on a farm in Iowa. “When we started farming down here, my whole outlook on farming and the livestock changed,” noted Tony. “It’s not only about the quality of life of the farmer, but the animals and the land you’re taking care of. Before it was more of a commercial venture.” Today, they still raise their own meat and grow their own vegetables, but now their garden is smaller and primarily for self-sustenance. The experience proved an extension of the charism “to live knowing that all of creation is the place to encounter God.”

In the case of Secular Franciscans, they belong to fraternities. The fraternity assists in living the charism through monthly meetings, ongoing formation, and activities. Tony says, “Making the journey and the ongoing conversion with brothers and sisters in community” is what he cherishes most. The Lady Poverty Fraternity has served the homeless in numerous ways and more recently, is working with migrant workers. They collect toys for children, make goody bags for the mothers, take rosaries and Scripture passages they can use to pray and serve meals.

“It’s amazing to have these wonderful friends in Christ,” says Bill Shade, Minister of the Lady Poverty Fraternity, which meets monthly at San Pedro Spiritual Development Center in Winter Park. He believes that the community aspect is an attraction to many as it facilitates living out the faith more fully and actively.

“All the orders of the Church are invitations to follow Jesus Christ,” says Shade. “We strive after perfect charity in our secular state. It’s all about being centered in Christ.” Shade was 26 when he was attending the University of Florida and noticed a bulletin announcement at Holy Faith Parish that mentioned a SFO meeting. Already an admirer of St. Francis and how he personified poverty, Shade went. “The people were so kind and loving. It was amazing,” he recalled. He continued attending and made his profession in 1993.

“What speaks to me about poverty is its simplicity and how it frees you spiritually because you’re not attached to anything,” he says. “What struck me about St. Francis was how free he was, how inspired and simple he was. I was fascinated by him.” As Shade tries to live a simpler, intentional life, he finds the fraternity plays a critical part. “One of the great things about it is you get the support of a community, so I didn’t have to do things as a lone ranger.”

After 26 years, Tony says, “The way we (Franciscans) approach trying to follow Jesus as close as we can in our lifetime,” continues to call him. What is your charism and where is it calling you?

If you are interested in learning more about Secular Franciscans, call Bill Shade, Minister of the Lady Poverty Fraternity at 407-575-1857.

By Glenda Meekins of the Florida Catholic – March 2019