Seeking God as a Benedictine Oblate 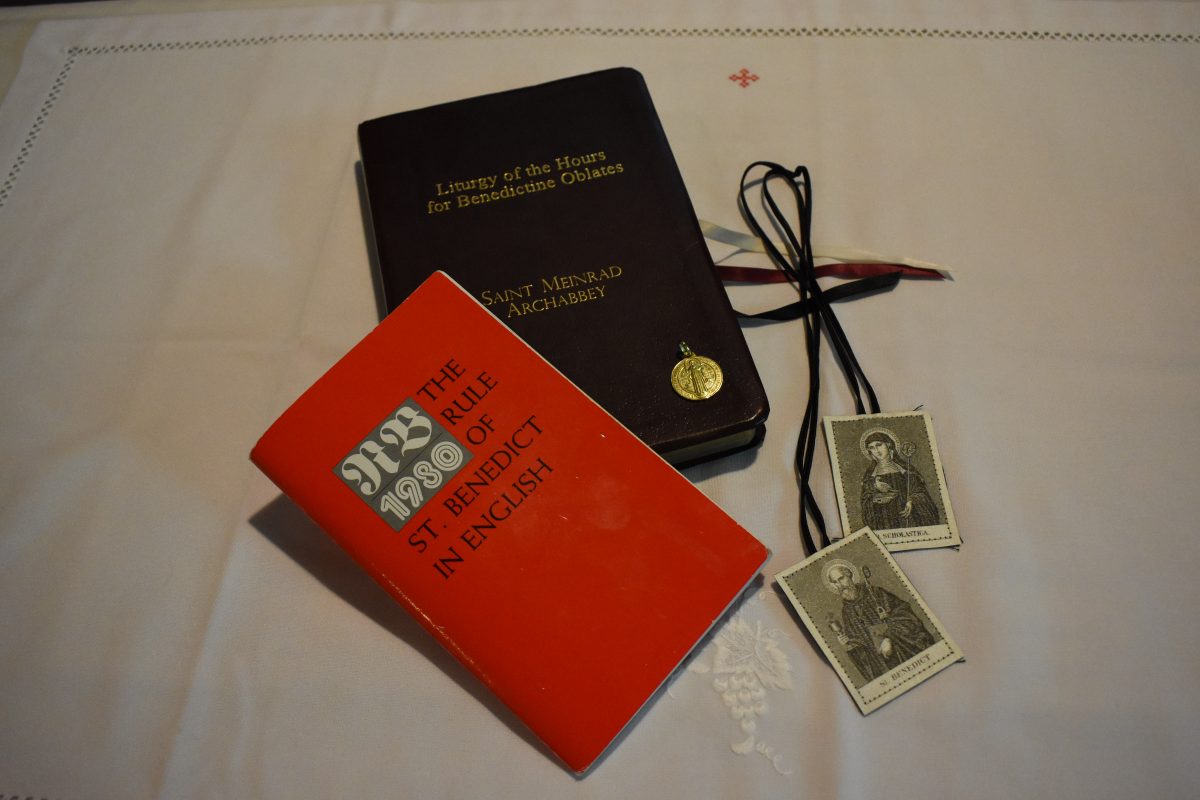 Benedictine oblates are called to follow the Rule of St. Benedict, pray the Liturgy of the Hours, and often wear a medal or scapular to remind them of their commitment and witness to the world. (GLENDA MEEKINS)

ORLANDO | Nearly 12,000 Benedictine Oblates in the United States and 25,000 worldwide, have answered the call to “Hearken” – the first word in the Rule of St. Benedict. While Oblates outnumber Benedictine clergy and religious, the numbers bear witness to a Christian movement to live in deeper union with God. In a frantic and ego-centric world, Benedictine monasticism provides balance, rooting oblates in the virtues of humility, simplicity, peace and service to others.

Benedictine oblates are lay people who offer their lives to God by living out the promises of stability, fidelity and obedience according to the Rule of St. Benedict (of Nursia), in affiliation with a Benedictine community. The word oblate means “offering”. Their lives are offered in service of others, reflecting the various aspects of the rule. Although written for monks living in a monastery, the rule’s foundation – seeking God while seeing God in others – is universal.

Carol Stanton, parishioner at St. Charles Borromeo Parish in Orlando, and oblate for almost 20 years says, “It (the rule) has very practical things about how to live together; how to balance your life between prayer and work; how to be hospitable.” She adds, “Monasteries receive everyone as if they were Christ – referred to as a radical spirit of hospitality. That has a lot to do with today. We’re having trouble welcoming the stranger.”

Stanton’s connection to the Benedictines began in the late 60s when she entered the Sisters of Florida Benedictine convent and taught school. Although she chose not to profess her final vows, she recalls, “I had seven great years of spiritual development, living by the Rule of St. Benedict. I kept a hold of that all the years after that.” By 2000, she settled in Massachusetts and worked at Glastonbury Abbey. Once again, the invitation to some form of monastic life summoned her. She felt it was time to “build on that and become an oblate” to be more “concretely attached”. The promise of stability commits oblates to the abbey community where they make their oblation. Even if one moves, they are required to remain in contact with their community.

During her novitiate, she met her husband, John Parrell, who was also becoming an oblate. Both shared in their love of this practical rule. “How we live with one another is a downright basic question for today,” says Stanton. Despite being written in the 6th century for cloistered monastics, Stanton acknowledges its values transcend monastic living. “It’s a very practical way of living out the Gospel. With all the messiness of living with other people, all of the stresses of life, it gives me an anchor.”

Now that they live in Orlando, Parrell admits, “It’s harder to be away from the monastery and live the rule, but we try to incorporate it into our daily life. Personally, it became a way of life and changed my way of life for the better. I learned a new definition of humility, what true humility is. It gave me a new discipline and focus on others… to be prayerful. “

The rule is based on the almost 1,600-year-old principle of ora et labora, the balance of prayer and work. Oblates integrate prayer into their mundane tasks and interactions, while also committing to praying the Liturgy of the Hours.

Charles Thatcher, parishioner of St. Margaret Mary in Winter Park and former director of music for the Diocese of Orlando and St. James Cathedral, is coming to the end of his novitiate, usually one year. He hopes to make his act of oblation in September. Thatcher says this balance sets the tone for his day as he consciously plans when he will say morning and night prayer and practice Lectio Divina.

He recalls how, in his 20s, he came to know the Benedictines. “Trying to find my way in life, a friend suggested I go to a Benedictine monastery to get away from it all, which I did. I was so taken by it. As a musician, Gregorian chant was their music. The liturgy was celebrated with such care. The atmosphere of silence and solitude; the hospitality of the monks was very evident. It was very restful. I felt a peace there.” Within a year, he applied to St. Meinrad Archabbey in Indiana and spent the next five years as a candidate, novice, and then junior monk.

Ultimately, he left feeling a call to minister to others through his gift and love of music in the liturgy. “I remember someone saying to the choir master, we need this in the parishes. How can we get this? It struck me so much. I could bring that in my ministry. If I look back on my music ministry of 30 years, there’s always been an influence of my time at St. Meinrad.” When he read about the oblates two years ago, he thought, “Is this what God has been calling me to all this time, because I have always been drawn to that life? Perhaps this is how I am meant to live out this monastic life.”

He added, “It makes me feel hopeful that I can continue to live on this path of conversion. It is a great sense of peace—seeing reality for what it is and seeing God in all people.” He explains, “It’s as simple as the first time I pull out on the road and someone pulls out in front of me. My intention is to let this spirituality affect everything I do in relationship to other people.”

Unique to this secular order is that it welcomes Christians of all denominations, as long as they are in good standing in their church. Occasionally, even clergy become Benedictine oblates – the most contemporary being Pope Benedict XVI, who had a great admiration for the father of Western monasticism and his namesake. He stands in the company of Dorothy Day, Thomas More, Thomas Becket and St. Thomas Aquinas, to name a few.

In Central Florida, St. Leo Abbey and Benedictine Sisters of Florida at Holy Name Monastery, both in St. Leo, have oblate programs that meet once a month for formation and fellowship. Ed Johnson, of Annunciation Parish in Altamonte Springs, made his final oblation in April at St. Leo Abbey. He learned of the Benedictines years ago when living in Indiana. A couple of years ago, he decided to Google “Benedictine abbeys in Florida” and up popped St. Leo. After learning about the abbey and participating in prayers, he was hooked.

“I loved the structure and how we integrate the rule into our lives today in the times we live in,” he said. “For any of us who are connected to Carmelites, Jesuits, Ignatian or other practices, it gives you a worldwide belonging to fellow oblates or spiritual journeyers.”

For Johnson and Thatcher, their favorite and often most challenging chapter in the rule is that of humility. “I find humility most applicable and go back to it time and time again,” says Johnson. “It keeps me from getting puffed up to realize that being a humble person goes hand in hand with trying to be a spiritual person.”

Thatcher agrees. “That stripping away of my self-illusion and masks that we wear, standing as your true self and being aware of your true self. When you do that, you’re aware that you’re no better than anybody else. You may know more, but it doesn’t make any difference. We so often look at how we stack up against everyone we meet, but the Benedictine stands there and says, ‘I have Christ in me, but you have Christ in you and in humility, I recognize that and that I am not better than you.”

He also points out the way in which the rule addresses “grumbling.” “It is obeying, but complaining. It becomes apparent to me that Benedict really sees this kind of complaining, grumbling, speaking against other people, their character, this kind of thing we can all tend to do, as destructive and hurtful – not only to the person you are directing it at, but to yourself. In my self-reflection every day, I ask myself, in what ways have I done that today and how can I be better tomorrow?”

Their experience affirms Stanton’s statement: “The groups are for the most ordinary of us. You don’t need anything, but your own spiritual yearning, desire and interest in whatever that charism is.” She assures it is good “spiritually and in every other way.”

To learn more about becoming a Benedictine Oblate, go to saintleoabbeyoblates.info.