Septuagesima and the Berger Family Tradition 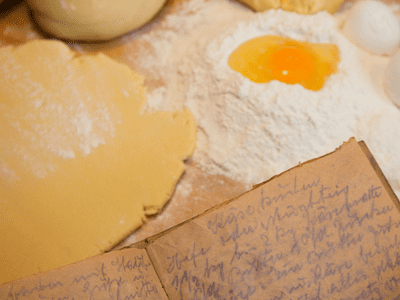 Prepare for Lent with a story and recipe from Florence Berger from Catholic Rural Life.

At one time it was customary to announce the date of Easter on the feast of Epiphany.  “As we have rejoiced in the Nativity of our Lord Jesus Christ, so, too, we announce to you the glad tidings of the Resurrection of our Savior.”  The Pasch is after all the pivotal star on which the feasts of the Church Year hang like lesser lights.  Included in the paschal mystery are the last three days of Holy Week in which we join Christ in His death, burial and resurrection.  For 50 days the paschal festivity, joy and celebration continue until their conclusion on the day of Pentecost.  For 40 days before the three great days which commemorate our redemption, all men are called “to live up to the full and complete Christian code of life.”  This period we call Lent.  Originally, Lent was not regarded so much a time of penance as a time of self-preparation and Christian restoration.

The time of Septuagesima or “pre-Lent” becomes the doorstep to our paschal festivity. This is really a new beginning. These days were once the opening of the Christian year as it approximated the start of spring in the Roman calendar. The Church places Genesis and the story of creation in our hands and asks us to begin the corollary of Old Testament reading. We are told by St. Paul that we are runners in a lifelong marathon. It is time to get on your mark, get set, and be ready to go. Septuagesima is the beginning of our race to win the crown of the resurrection.

In the early days of the Church, Lent was used as a training period for the fuller Christian life.  It was not until the fourth century that it began to assume a more penitential character.

The severity of the fasts and public penances were not easy and men began to pull at the bit.  As the restrictions increased, it was very human to have one last fling.  Christians began to celebrate Shrovetide.  This was the time of carnival and fun before the beginning of long Lenten penances.  How natural and human it was to feast before the fast.  The Tuesday before Ash Wednesday was called fat Tuesday or Mardi gras or fetter Dienstag.  “If fat and flesh are prohibited”, they said, “we will use up what may not last the forty days of Lent.” In Italy the four weeks before Lent are days of merriment and festival. The Syrians serve roast lamb and their favorite Dolmas. The Germans, as thrifty as any cooks in the world, used up their fat and eggs by making Fastnacht doughnuts. Begin to make these about 5 p.m. on “fetter Montag.”

While the finished dough is rising, we call the children in from their coasting. Such stamping of feet you have never heard. Their noses are as rosy as their red sleds, and nose is about all you see of the little ones in their knitted caps and mufflers. “Time to roll and cut doughnuts, hurray!” they shout, as coats and leggings and boots fly into a pile on the kitchen floor. There will be time to put their clothes away when the doughnuts are allowed to rise again. The smaller children are given preference in the doughnut cutting. Only the older ones can help with the frying. There is no smell quite so rich and mouth-watering as fresh doughnuts. That is why doughnut shops use their odor as “come-on-advertising.” Your children will praise you in the gates, and your fame shall spread to the uttermost coasts if you make doughnuts for Fastnacht.

On the Monday before Ash Wednesday, cover potatoes in water and boil. When soft, drain and mash potatoes, reserving ½ cup potato water to scald 2 cups of flour.

Dissolve the yeast in ¼  cup lukewarm water. Combine the mashed potatoes, moistened flour, and yeast. Add the 2 remaining cups of flour to the lukewarm milk, and stir into the potato mixture. Let the dough rise overnight.

Heat the oil in a large pot over medium heat to 370 degrees. Carefully place the circles in the oil, and fry until golden. Remove the circles with a slotted spoon, and drain on paper towels.

–Excerpt from the Cooking for Christ Cookbook, by Florence Berger