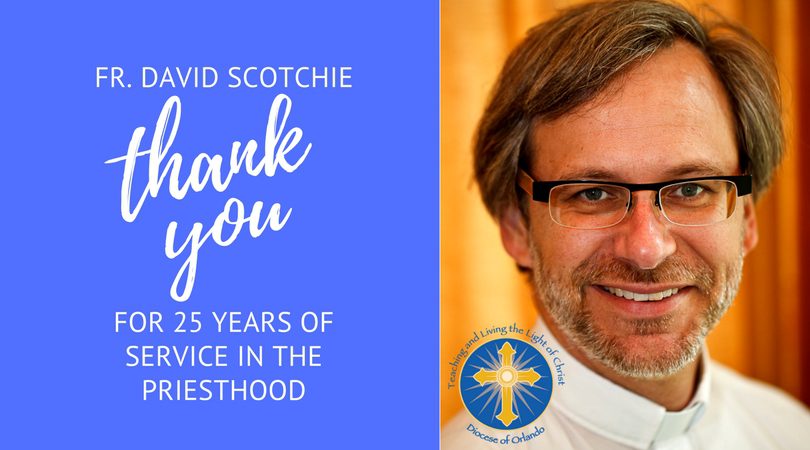 Father David Scotchie remembers the exact moment he heard God calling him to the priesthood, though it would be several more years before he would surrender to that call. A Florida native, Father Scotchie grew up in Altamonte Springs and attended St. Mary Magdalen Parish with his parents, Larry and Mary Ann, and his five brothers and sisters. He was half-heartedly considering following his father’s footsteps as an engineer when one day God issued a different invitation.

“On January 16, 1980, while changing classes in high school, I heard a clear voice in my head, ‘Be a priest.’ The thought was not my own,” remembered Father Scotchie. “God was calling me to be a priest. Without pause, my age-appropriate response jumped out, ‘No.’”

Through college, Father Scotchie sought other directions, but priesthood always remained on the horizon. After graduation, he spent a year in service with the Jesuit Volunteer Corps, “to grow up.” It wasn’t until he entered St. Meinard Seminary in Indiana that he came to accept and embrace the Lord’s desire.

Bishop Norbert Dorsey ordained Father Scotchie at St. James Cathedral on May 29, 1993. Over the last twenty-five years he has served at Holy Name of Jesus Parish in Indialantic, as campus minister at the University of Central Florida, at Sts. Peter and Paul Parish in Winter Park, St. Thomas Aquinas Parish in St. Cloud, and as founding pastor of St. Maximilian Kolbe Parish in Orlando – an assignment he calls his hardest and most rewarding. Since 2013, he has served the community at Most Precious Blood Parish in Oviedo as their pastor.

Father Scotchie said, “Preaching the mystery of faith has been a joy,” and it is a joy that he expresses both from the pulpit and from the pen. A gifted writer, Father Scotchie has published two books, “A Prayer for Hope” and “Can I Say a Prayer With You,” that equip Catholics to help others with prayer. He is also a long-time columnist with The Florida Catholic newspaper.

“Early in my priesthood, Deacon Henry Libersat, then editor of the Florida Catholic, asked me to write for the homily column. I started writing and no one has told me to stop,” said Father Scotchie.

“I am so inadequate to witness to God’s saving love in Jesus Christ, yet the Lord is okay with that,” reflected Father Scotchie. “Calling me to the priesthood, God has freed me to surrender to God’s love in Jesus Christ. I hope to show and tell each day in Word and Sacrament how much God loves us so that we live in His friendship and in solidarity with one another.”