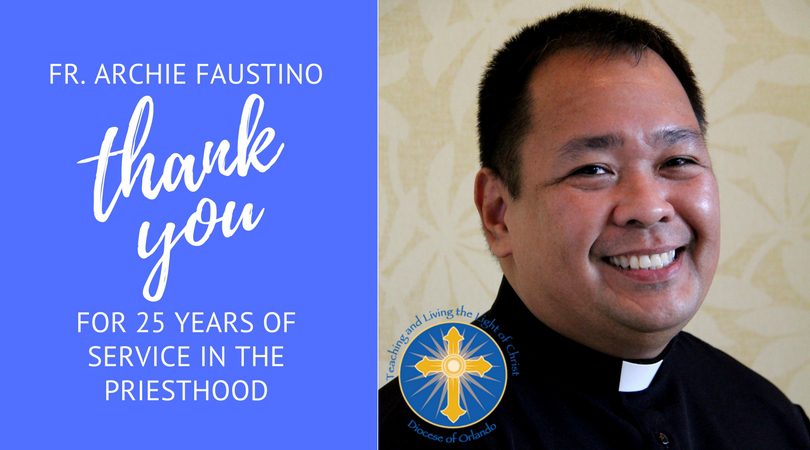 Father Archie Arthur Filoteo Faustino is the youngest of five children born in Zamboanga, Philippines. His parents, Agripino and Justina, had strong faith that they passed on to their children. Agripino was a member of the Knights of Columbus and Justina was a full-time catechist and president of the archdiocesan Women’s League.

“My parents, now deceased, were both teachers and active practicing Catholics who always taught us through their witnessing to have a love for the Eucharist, for the Lord and for others,” recalled Father Faustino.

Father Faustino’s vocation began as an experiment when he was still in grade school after a tour of the seminary convinced him to give it a try.

“I left home and entered the seminary when I was 12 years old, when it dawned on me that it would be cool to try – just to try,” remembered Father Faustino. “But the formal realization of the calling came when I was in college, and I made the decision to answer the call.”

Father Faustino was ordained at the Immaculate Conception Cathedral by Archbishop Francisco Cruces on May 29, 1993. He served the Diocese in Zamboanga, Philippines for twelve years: twice as a pastor, as the dean of academics at Pastor Bonus Seminary and as the catechetical director of the Archdiocese. In 2006, Father Faustino was sent to Rome to study for a doctoral degree in philosophy. He came to the United States in 2008, first to the Diocese of Rockville Center, and then to the Diocese of Orlando in July 2017. He now serves the community at St. Joseph Parish in Winter Haven.

“I was sent by my bishop to set up and start a priest-sharing program between the Zamboanga Diocese and the Orlando Diocese, where priests are sent for exposure and assignment, as on a mission,” explained Father Faustino. “The best moments in my life are those times when I get to be with people in far countries; in Italy, New York and now in Florida, and being able to serve and be an instrument of the Lord in proclaiming His Good News with all my unworthiness and imperfections.”

For Father Faustino, the greatest blessing of the past twenty-five years has been the opportunity to share God’s love with those he encounters.

“Being a priest is the chance, in my own little way, to show to others in what I do and what I can offer, that the Lord is compassionate, loving and merciful.”