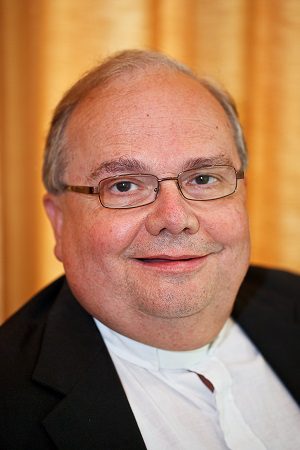 When Father Steve Baumann ‘retired’ from a Catholic middle school classroom to pursue his vocation, a priest friend told him he would just be teaching larger classes. “How true that is,” the 67-year-old parochial vicar of Annunciation Parish in Altamonte Springs said.

A native New Yorker, Father Baumann attended public schools until middle school, at which time he transferred to his parish school. “That was a good move, and gave me the faith foundation for my growing years until I was professionally teaching at St. Mary Magdalen in Altamonte Springs,” he said.

Growing up as an only child, his family practiced their Catholicism regularly, with weekly Sunday Mass, holy days of obligations, and the weekly Lenten devotions of the Stations of the Cross and Adoration. His father was a non-practicing Methodist who attended Sunday Masses faithfully. One day he surprised the family with conversion to the Catholic faith.

“He admitted many years later that he was touched by the faith and devotion he saw in us, and the beauty of the Mass, and decided to seek instruction from our pastor, which led to his formal conversion,” Father Baumann said.

Although his interest in pursuing a vocation was awakened in eighth grade, his family cautioned him to go slow and pray about it. “But they were always supportive and gave me the freedom to discern.”

Father Baumann became interested in teaching as a profession, and pursued that career with multiple degrees in college.

It wasn’t until Monsignor Patrick Caverly entered his life at St. Mary Magdalen that the pursuit of a vocation would come to fruition. Monsignor Caverly hired Father Baumann as a middle school teacher, and took the 26-year-old under his wings. “We formed a faith connection,” Father Baumann said.

There were two vocation ‘moments’ for Father Baumann. One occurred during the St. Mary Magdalen Fall Festival in 1986. He was trying to input grades on to a high tech Apple II-E computer. Most unlike the conscientious teacher that he was, his concentration was interrupted time and again.  He found himself making mistakes as he entered the grades. Finally, he paused and said, “If this is you Lord, and you are telling me what I think you are then I’ll do it!” He shut off the computer and returned to the festival. He found himself walking around in a fog, relishing the feeling of great joy he was experiencing.

A few months later, Monsignor Caverly invited him to Sunday morning breakfasts at the rectory.  Then he invited him to dinner to meet other priests. Following a three hour conversation during which Father Baumann asked many questions about the priesthood, including why he shouldn’t pursue a vocation, he finally stopped and said, “Well it’s obvious I should do this and you win.” “Oh Stephen, not I but God wins!” Monsignor Caverly replied.

He was 38 years old at the time. Bishop Norbert Dorsey sent Father Baumann to the Sacred Heart School of Theology in Hales Corners, Wisconsin.

“I spent four glorious years of interesting studies, fieldwork and spiritual formation alongside other mature men who were also professionals and quite a few being widowers whose children had grown up. Our dinner conversations with heart surgeons, educators, attorneys at law, retired military officers, journalists, and many other professionals, were stimulating and encouraging, especially their vocational stories.”

Father Baumann was ordained on June 6, the anniversary of D-Day and the feast day of St. Norbert, something he and the bishop shared in common for many years afterwards.

Reflecting on his 25 years as a priest, his favorite activities and greatest privileges are celebrating Mass and hearing Confessions. He is the Scout Chaplain for the Diocese of Orlando, and oversees the religious awards program.