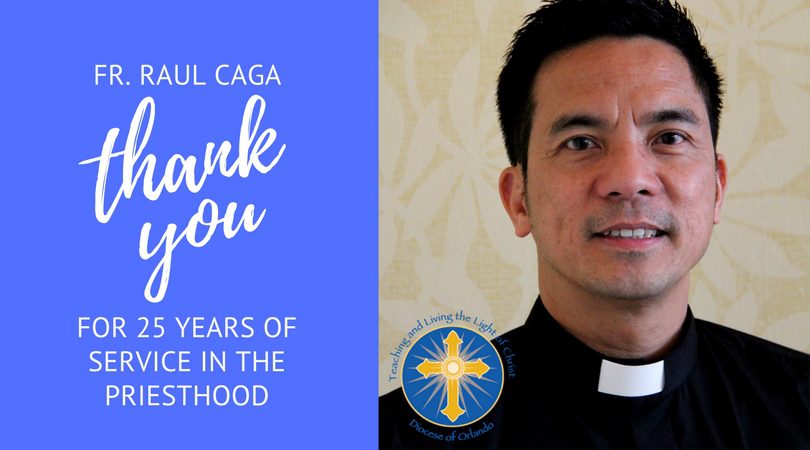 Father Raul Caga, SVD also known as, “the Singing Priest,” is an award-winning singer and songwriter. Both his love of music and love of God were nurtured in his large Catholic family in the Philippines. The ninth of ten children, Father Caga remembers his siblings often gathering for one of their favorite pastimes – singing around the family piano. He also recalled praying the rosary together daily and participating in Mass together weekly.

“Maybe the greatest gift God gave me is the faith of my parents,” said Father Caga. “They were so dedicated to the Catholic faith. That paved the way to my vocation to the priesthood.”

Father Caga points to his involvement as an altar server as first opening him up to the idea of priesthood. With the encouragement and support of his parents, he entered seminary immediately after high school. While there he met the vocation director for the Society of the Divine Word and was ordained on December 8, 1993.

The Society of the Divine Word is a missionary order, and while Father Caga’s first assignment was still in the Philippines, the conditions he met were unlike anything he had encountered before.

“It was a really remote place, hardly touched by civilization. There was no infrastructure, no roads, the place was economically poor and neglected,” said Father Caga. “I should say those were my happiest and most fulfilling years of my priesthood. I really saw myself as a pastor with the heart of a shepherd.”

Father Caga went on to serve as a vocation director for two years and then studied for his licentiate in moral theology in Rome. Once he received his degree, he taught for thirteen years at the seminary and served as vice rector until last year when he applied to serve in the United States. He came to the Diocese of Orlando and was assigned to St. Mary Parish in Rockledge.

During this time, Father Caga also ministered with music. An opportunity arose while he was in seminary to record an album of religious music. After receiving positive feedback, he went on to record four more, one of which won Best Religious Album in the Philippines in 2012. He has travelled Europe giving concerts and using his music to draw people to Christ.

“Music is a powerful tool in evangelizing and bringing people closer to God. It has the power to touch the hearts of people,” said Father Caga.

Looking back on twenty-five years Father Caga said it’s hard to believe he has made it this far.