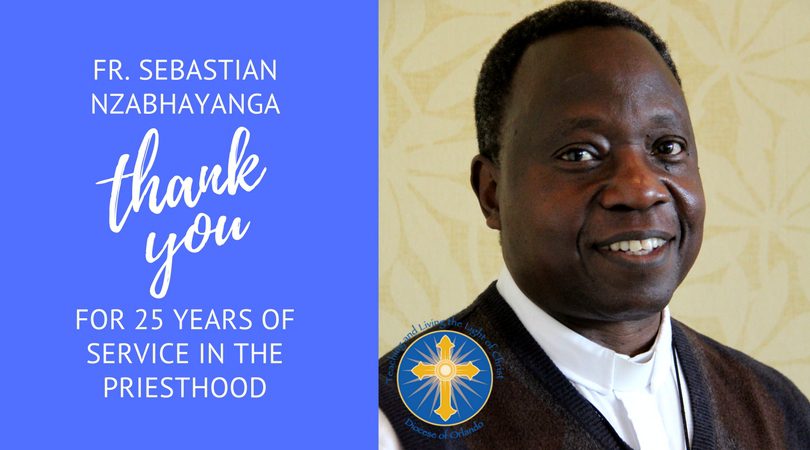 Father Sebastian Nzabhayanga was the sixth of eleven children, born and raised in a mostly pagan village in western Tanzania, south of Uganda, Africa. Growing up, his father was a model of evangelization. As one of the few Catholics in the village, his father invited their neighbors and family to catechism classes and several were baptized – including Father Nzabhayanga’s mother. His faith, and his vocation, were also impacted by the Catholic missionaries, or “White Fathers” who were ministering in the area.

“I remember one time, a White Father priest said in his homily, ‘Don’t think only whites can become priests!’” said Father Nzabhayanga.

He remembered hearing that message while gazing up to the sky where the priest’s voice was coming from a loudspeaker in the trees. It was as if the message came to him from above. Soon after, he entered the seminary while only in the fifth grade.

After eight years, Father Nzabhayanga left the seminary. He spent a year in military service, four years in government work and three years in college. Through it all, he couldn’t shake the feeling that he was meant to return to the seminary.

“I constantly felt like I should go back,” said Father Nzabhayanga. “The tipping point was when I met someone in the university who was intending to become a priest. We talked about it and encouraged each other. When we finished college, he ended up getting married and I ended up back at the seminary.”

Father Nzabhayanga was ordained on June 27, 1993. He served as a parish priest, principal of a teacher’s college, hospital administrator, chaplain and vicar general. He also spent four years studying in the United States. It was that experience that opened the door for him to come to the Diocese of Orlando in 2017.

“My bishop felt that we should have a priest outside the diocese to be able to make connections between my diocese and the outside world,” explained Father Nzabhayanga. “Because I had studied in the U.S., he thought I would be a good person to send.”

Since arriving in the Diocese of Orlando, Father Sebastian has served the communities at St. Margaret Mary Parish in Winter Park and St. James Cathedral in Orlando. He currently serves St. John Vianney Parish in Orlando.

“I always say the priesthood is the greatest ministry one can think of,” said Father Nzabhayanga. “Human beings are more than flesh and bone. We always forget we have a spiritual side. It is a great honor to be in a position to show people the way to heaven. It’s a great profession, a great opportunity to serve God in a special way.”