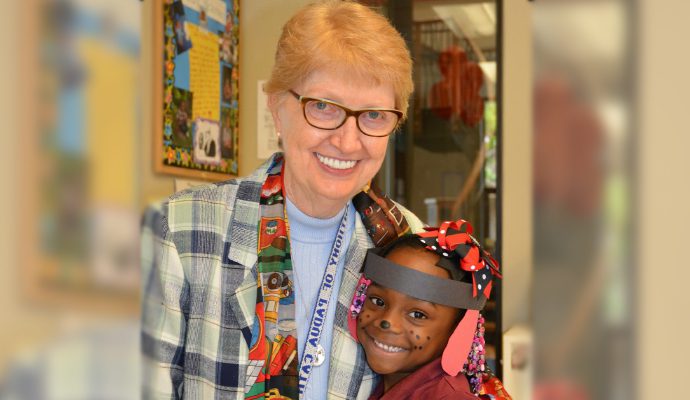 ORLANDO | Born and raised in a Catholic family in western New York, Sister of Saint Francis Catherine Noecker says she was a typical teenager of the 50s, “enjoying American Bandstand and drag-racing with my brothers.” But her life took a less typical turn when, as a junior in high school at Immaculata Academy, she felt a call to use her adventurous spirit in service to God. She has spent the last 60 years answering that call – and loving every minute!

“A call was issued from Franciscan missionaries in Japan for someone to take the place of one of the Friars who had gotten ill and had to return home,” remembers Sister Catherine. “I felt the Spirit whispering in my heart. Following graduation from high school, on September 8, 1959, along with 23 other young women, I joined the Sisters of St. Francis in Williamsville, New York.”

“The story goes that mom cried for two weeks when I left. And two of my younger brothers bet me 50 cents that I wouldn’t stay,” said Sister Catherine, adding with a laugh, “They never did pay up!” The tenth of twelve children, Sister Catherine was no stranger to community living and she has found her Franciscan community to be one the biggest blessings of religious life.

“Even though separated by miles, most often thousands of them, I have never felt apart from our community,” remarked Sister Catherine, who although she never did make it to Japan, her missionary work led her to Puerto Rico, South Carolina, Hawaii, and Florida.

For more than fifty years, Sister Catherine served in education as a teacher and principal, but her work extended beyond the classroom. Among the memories that stand out as she looks back on those years are observing how quickly young children learn a second language, being instrumental in the construction of a new school for children from financially challenged families and learning to survive hurricanes. Sister Catherine calls these moments “encounters with the Trinity.”

“Mine was a call to be a missionary and I had no doubt about it,” said Sister Catherine. “I had never even left my hometown before I joined the sisters. As missionaries we spread the kingdom and do whatever needs to be done wherever we are sent.”

Today Sister Catherine can be found enjoying her “second career” at St. Paul’s Parish in Leesburg where she has served since 2015. Her days are filled doing volunteer work, serving on congregational committees, assisting her 92 year-old sister who lives in The Villages, serving as the moderator for the Sisters of the Diocese or Orlando and being the “chief cook and bottle washer” for Sister Mary Schifferle who works at St. Paul’s Catholic School.

Sister Catherine wants young people to know that God has a plan for everybody. “If a young person thinks they have a calling, pray about it, talk to your pastor, talk to a sister. You have to know if this is what God wants you to do. Don’t be afraid!”

“I have really loved every minute of being a Sister of St. Francis – in good times as well as those that were especially challenging,” added Sister Catherine. “It has been an exciting 60 years and I look forward to all the rest!”

By Elizabeth Wilson of the Florida Catholic October 2, 2019