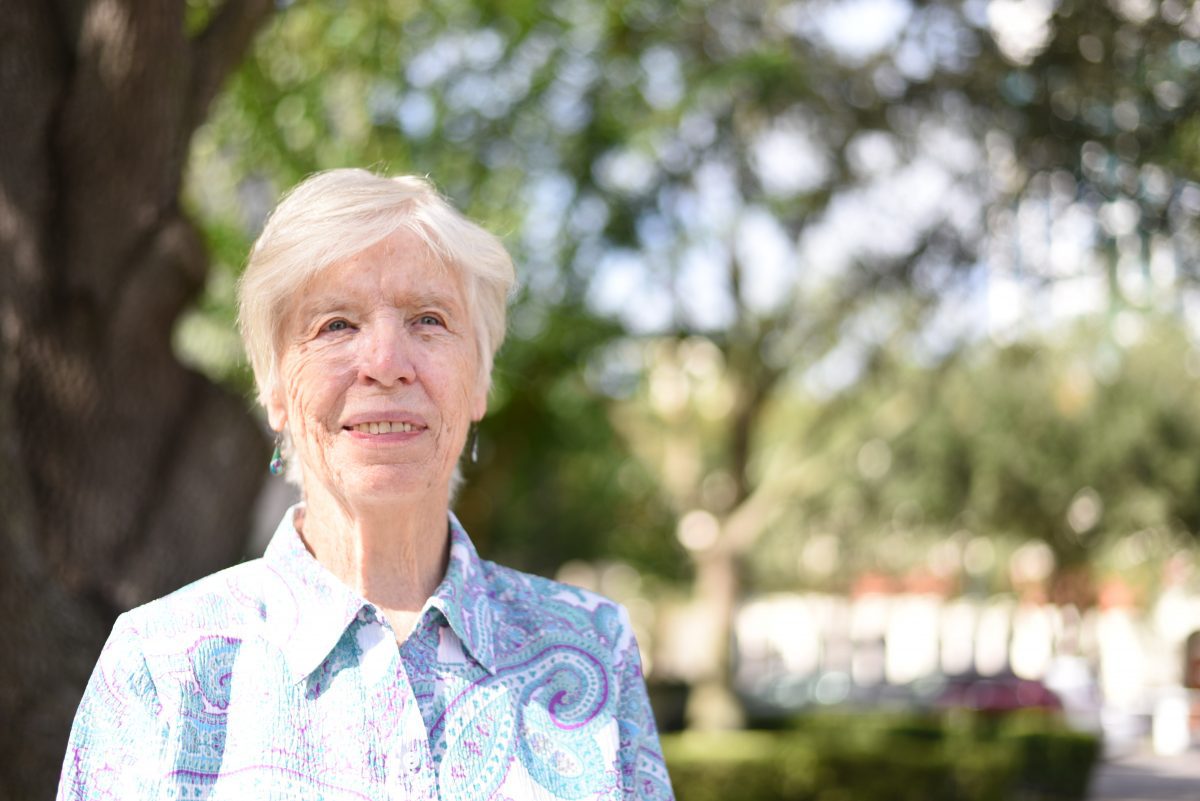 As Sister of the Holy Names of Jesus and Mary, Sister Elizabeth Crean sits down to be interviewed, her blue eyes sparkle with delight. They reflect the vigor and adventure of her early years as a religious, and show no sign of slowing down. A gentle kindness is exuded in her humility. Despite her many leadership roles in her community, three degrees, and a non-profit that helps immigrants, all accomplished through the grace of God and her willingness to go wherever the Lord needs her, she says, “When I think of what I’ve done and what some of my sisters have done, I think – You better get on the ball Crean. You don’t have much time left.” With a dismissive laugh, she discounts her own work of molding a generation through teaching and leading her order through difficult times.

Sr. Crean entered the order inspired by her Catholic school teachers – Sisters of the Holy Names of Jesus and Mary in Maryland and Washington, D.C. “The women who taught me were so real and friendly… I thought, gee, it can’t be bad to be one of them someday.” She thought of her senior teacher and noted, “She was the most down to earth person I’ve ever met.” She entered the convent after high school graduation, in the summer of 1960, nine days before her 18th birthday, leaving two young brothers behind. Reflecting on it recently, she said, “As I grew older, I realized what I missed there. Maybe I should have hung around a little bit longer, but I didn’t.” So rooted in the present moment, it is hard for her to look back. She has no regrets about where the Lord has led her. On the contrary, she is joyous. “It’s been fun to be a sister. God has been so extraordinarily good to me,” she says with a broad smile.

She embraced each opportunity set before her with confidence, a reflection of her deep trust in her Creator. “I’ve seen God in my life in the way my life has unfolded. In the way things pop up that I hadn’t expected.”

In typical fashion, the changes the Second Vatican Council brought to her order in the 60s were simply accepted like petals unfurling into full blooms. She left her habit behind without much thought, trusting as always in God’s providence and plan for her. All she remembers of the changes was that the superior and principal of her school in Opa-Locka, FL announced on a Friday, “Now boys and girls, on Monday the sisters are going to look different. Now don’t be surprised.” She got a kick out of her telling the students not to giggle and laugh.

After earning her education degree from Barry University in Miami Shores, she taught in schools as a history teacher in New York, Virginia, and Florida – including Bishop Moore Catholic High School in Orlando. She served as president of one of the order’s many schools, Academy of the Holy Names in Tampa. While there, she earned a master’s degree in history from the University of South Florida.

She even spent several years (1981-1985) working for the Florida Catholic as a writer and jack-of-all-trades, assisting where needed. Over the years, she has worked feverishly on several leadership committees within the order – notably assisting them when their five provinces merged into one, the U.S.-Ontario Province, in 2006.

Sister Crean went on to earn a paralegal degree from Seminole State College and a Juris Doctor from California Northwestern School of Law online. True to the order’s charism of social justice work, she said she was moved to do so, “As the plight of immigrants was becoming more public and people knew about them – what they suffer, how they get here and why they come.” She thought she could help them fill out applications and assist them in becoming citizens. She applied to the Department of Justice and became an accredited representative. In 2018, she established the non-profit Paralegal Immigration Advocacy, Inc., which offers pro bono assistance to immigrants seeking citizenship.

“I’m very proud to be a Sister of the Holy Names of Jesus and Mary,” she said. She rattles off a list of sisters and their accomplishments throughout the world. Sisters going to the boarder to feed immigrants or those in Peru and Brazil or Africa. “It’s great to be a part of something like that—even a small part.”

Considering the current social justice and climate challenges in light of the order’s other charism, to care for creation, and addressing the dwindling numbers of religious, she said, “Even as things are changing, we’re changing too. It’s not something like, oh my God, we’re going to fall apart. We’re not. If we end up with five (sisters), we end up with five. We started out with four or five. Who knows what’s going to happen.”

Although officially retired, her tall, slender figure finds it hard to stay in one place for long. Each day she asks, “Is there more I can do, please? I’m not young anymore. Please God, I’m in good health. I want to keep doing what I’m supposed to do.” She notes, even if she can only help one person, “Every one person you help is one person helped.”