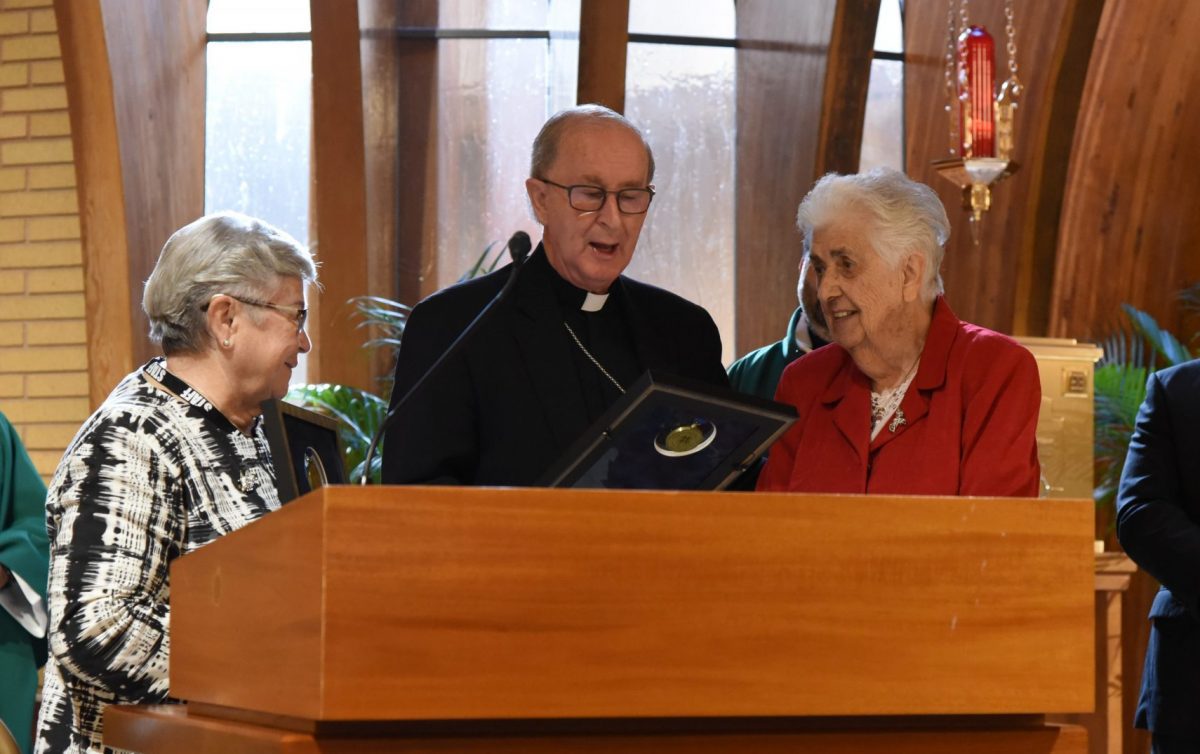 ORLANDO | After more than three decades serving St. John Vianney Catholic School and parish in Orlando, Sisters of St. Francis of Philadelphia Elizabeth Murphy and Maria Gross are returning to live near their motherhouse in Pennsylvania. The sisters were honored during a farewell Mass Sept. 25 for giving of themselves sacrificially for the children they mentored throughout the years.

Students poured into the church along with guests and clergy to the sound of young voices in the school choir. Beli, an eighth-grader, began the Mass by giving thanks on behalf of her classmates. “You have helped us to learn, to grow, to serve, and to give to others for many years. Our lives have truly been enriched and brightened by your extraordinary leadership. Your whole lives have been about educating children and bringing Christ to life.”

Principal Cathy Marshall remarked the Gospel reading where Jesus calls for the apostles to go and preach, two by two, carrying nothing, was appropriate as it is often the reading for a religious sister’s first profession of vows. “They’ve been called to be special messengers of God that defines religious life,” Marshall said. “The sisters arrived in the dark of night, but leave in light,” recalling the poem of St. Francis. “Where there is a Franciscan, there will always be light.”

Seventh-grader J.R., read one of the Prayers of the Faithful. He quietly sobbed during most of the Mass. He has known the sisters since he was three years old, arriving when he was in pre-school. He and Sister Murphy formed a bond over the years. He explained to Ms. Marshall, “I’m just so sad they’re leaving.”

Six Sisters of St. Francis of Philadelphia arrived at St. John Vianney Catholic School in 1963 to help lead a fledgling school that had opened the previous year. Sister Murphy arrived in 1976 and taught third, seventh and eighth grades until 1984.

After traveling to Zambia, working in nursing and serving in other dioceses, she was asked to return in 1993 as principal. She brought her friend and mentor, Sister Maria Gross, as her assistant principal for the next 10 years. The sisters met years prior in Walpole, MA, where Sister Gross was principal. They became fast friends and Sister Murphy credits Sister Gross with guiding her to become the force that she is. “When I met Sister Maria in 1966, I was really very young and didn’t have a lot of experience… She was always patient. I was going through a rough patch and would always say, ‘I can’t do that.’ One day she said, ‘I don’t want to hear you say ‘I can’t’ again. Please know you have gifts and these are the gifts you will use.” Sister Murphy said she worked hard to rise to the expectations. And rise she did.

The same year of her 50th jubilee, 2012, she received the Bishop Dorsey Award for Distinguished Service to Catholic Education. During her tenure at St. John Vianney, the school was honored for its work with Give Kids the World, a non-profit resort in Kissimmee for children with life-threatening diseases. The school also received the Blessed Mother Teresa award for the 2013-2014 school year.

As she reminisced about what she might miss most, Sister Murphy recalled a Vietnamese student whom she has also known since pre-school. “She could not speak an iota of English when she came. The first time she got up to read… it was in third grade,” Sister Murphy said. “She did it with such poise and such perfect English that I sat and cried.” Both sisters said stories like this are numerous.

After receiving flowers and a plaque presented by Bishop John Noonan, the sisters said their goodbyes. Sister Maria Gross said, “The 26 years I’ve spent here are the best of my life.” She will celebrate her diamond jubilee (75th anniversary of profession) next year with her community. Sister Murphy added, “It has been a joy for both of us.” The two sisters look forward to ministering to other retired religious and encouraging those at the beginning of their chosen Franciscan path with their simple yet powerful message, ‘May the Christ in you reach out and touch the Christ in all you meet.”