Sister Trinita Balbach, O.S.F. Remembered for a Lifetime of Service in Catholic Education

Sister of St. Francis of Philadelphia Trinita Balbach died at the age of 91 on March 13 after celebrating 70 years of religious life. 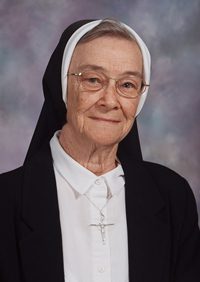 Sister of St. Francis of Philadelphia Trinita Balbach died at the age of 91 on March 13 after celebrating 70 years of religious life. She entered the congregation in 1943 and professed her first vows in 1946. She ministered primarily in education as both teacher and principal and, in later years, in parish ministry.

Sister Trinita ministered for many years in various parts of Florida including 27 years in the Diocese of Venice and 19 years in the Diocese of Orlando as both teacher and principal of St. John Vianney Catholic School in Orlando. Seemingly always on the move in her order’s signature white habit, Sister Trinita became known as “the White Tornado”, a nickname that stuck throughout the years. Upon her retirement from St. John Vianney in 1993 she reflected:

“I have always felt I was where God wanted me to be at the time. With his help, I let my conscience be my guide and after awhile I realized even devastating situations were a blessing in disguise.”

Sister Trinita continued her ministry in Catholic education around the country, serving as assistant director and school advisor with the George and Mary Kramer Foundation which provided financial help for students in Catholic schools, and holding teaching and administrative positions in the Diocese of Pensacola-Tallahassee, the Archdiocese of Baltimore, and the Diocese of Charleston until she moved to Our Lady of Angels Convent, the congregation’s motherhouse in Aston, Pennsylvania in 2011.