With only a few pots and pans, Sr. Marie Nguyen and ten other members of Incarnation Consecration Mission (ICM) religious community arrived in Orlando on August 15, 1989. Recent refugees themselves, the sisters, postulants, and aspirants would be serving the Vietnamese community who had resettled in Orlando in the years following the Vietnam War. 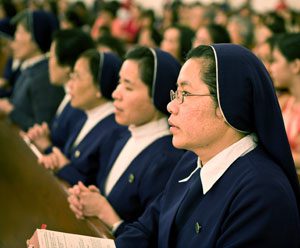 With only a few pots and pans, Sr. Marie Nguyen and ten other members of Incarnation Consecration Mission (ICM) religious community arrived in Orlando on August 15, 1989. Recent refugees themselves, the sisters, postulants, and aspirants would be serving the Vietnamese community who had resettled in Orlando in the years following the Vietnam War. Enduring one of the coldest winters on record in a cramped living space without central heat, the sisters began their ministry of sacramental preparation, faith formation, and presence to the Vietnamese Catholic Community.

“As religious we are ready to go anywhere,” Sr. Nguyen explains. “It was hard at the beginning. We came with nothing. A man found us a house to stay in but it had only two bedrooms so we stayed in bunk beds, four to a room with only a small walkway in between!

“We were really poor at the time, but we didn’t mind. Our calling was to live among the people and help the poor especially. For us to experience having difficulty with our basic necessities helped us to understand the poor.”

In the late 1980s a new wave of refugees arrived from Vietnam under the Humanitarian Operation (HO) program. This program, offered by the United States Government, allowed political prisoners who had been detained for many years in Communist re-education prison camps, to resettle in America with their families.  The sisters were there to welcome and serve the families that arrived, helping them to feel at home in a new country where they did not speak the language.

“We used to come and visit them and we would just pick up whatever we had in the house and buy some groceries for them,” Sr. Nguyen remembers. “We felt that we were one with them. We didn’t have much and they didn’t have much.”

In addition to their ministry of service to the parish community, each ICM sister has her own career, serving in a variety of fields from medicine to social work. The careers allow the sisters to bring Christ to the people as well as to be a self-supporting community.

“Our main charism is to imitate Christ who has come into the world and become a man, become just like others except sin. We are called to imitate that,” explains Sr. Nguyen. “To come to the people and work among them, live among them, and be with them first of all and witness to Christ. Working in our jobs is one of the ways to live out our mission because we think that mission work is in not just in Church environments but other environments too.”

During the week Sr. Pham works as a medical secretary. Her work brings her in contact with people every day in great need of help. From setting appointments and helping patients complete paperwork to interacting with her co-workers, she finds opportunities to bring Christ into each moment of the day.

“Some people know I’m a sister and some don’t, but it doesn’t matter,” says Sr. Pham. “It’s a great way to serve. I live my mission in my career and I really like it. I do as much as I can. I bring Christ and help people. When I go to Mass in the morning I say ‘God, please help me to be good and to help people and to do good in my job.’ It’s very simple but I love it.”

On August 15, the Feast of the Assumption of the Blessed Virgin Mary, the sisters will celebrate twenty-five years of service in the Diocese of Orlando. From their humble beginnings in the two bedroom house they have seen the Vietnamese community grow from having one Vietnamese Mass a month to having their own parish, St. Philip Phan Van Minh, with three Masses each week. Between their early work with the Vietnamese refugees, their ongoing ministry at the parish, and the presence of Christ they bring to their workplaces, the sister have touched countless lives in their time here.