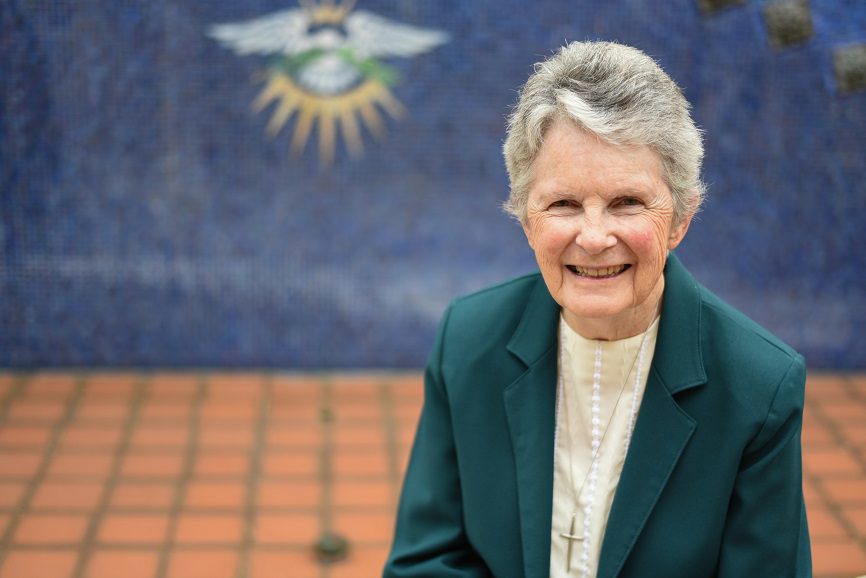 Orlando│After 11 years as the associate vocations director for the Diocese of Orlando, Sister Kathleen Power of the Sisters of St. Joseph of St. Augustine, returned to the order’s motherhouse to live in community at the end of July. The diocese will miss her humor, wit, and the care with which she approached her calling—to serve the needs of the dear neighbor. Despite her small stature and modest demeanor, her tenacious accomplishments leave behind a dynamic and robust legacy for women discerning vocations.

Sister Power began her position in 2007, a byproduct of the First Diocesan Synod under then Bishop Thomas Wenski. Parishioners who participated in the synod overwhelmingly requested there be a religious in the vocations office. Sister Power, a veteran teacher, principal and spiritual director who had worked in spiritual formation for years was eager for the opportunity. Unafraid of adventure, she accepted, gladly returning to the city where she grew up. A former graduate of Bishop Moore Catholic High School, she quickly reintegrated, becoming the chaplain for the girls volleyball team, a ministry she loved.

Much of her success can be traced to her initial attraction to religious life. “I was drawn to the idea of service in the church,” recalled Sister Power. “I wanted to make the world a better place and serve God.” Looking back at the list of accomplishments, God would surely be pleased.

Sister Power began “Fiat Days” and “Come and See” retreats where women receive discernment guidance. She followed the example of other dioceses and began “Nun Runs”, one to three day visits to various religious orders with women discerning vocations. The outings provided a unique glimpse of religious life. At University of Central Florida Catholic Campus Ministry, she was a weekly presence offering spiritual formation and discernment guidance.

Her presence provided models for both women and girls. She served as spiritual director at the House of Discernment at UCF, established by female UCF students. There, young women, “live, pray, speak of community life and their effort at living it,” she explained. The endeavor was the fruit of her weekly discernment visits to UCF.

As the “spiritual mother” to many seminarians over the years, Sister Power said it was rewarding, “watching these young men mature into wonderful priests. To have my little part of it…” She was also impressed with the woman who came to her and was overjoyed, “to discover that the desire of their hearts is to be closer to Christ—to know Jesus Christ and to know what Christ is asking of them. They come so humbly and beautifully.”

Recently, Bishop John Noonan asked her to assist four women wanting to become consecrated to the Order of Virgins, a pious practice that dates back to the early female martyrs. “We are blessed to be here in Orlando, to have Jesus sending women to us for assistance,” she said. Formation varies for each woman, but when they are ready, there will be a ceremony of the rite held in the cathedral. She plans to return to the diocese monthly to continue forming them until their consecration. She noted, “They are living this life of the evangelical virtues… already living poverty, chastity and obedience. They already serve the church.”

Sister Power said she will miss working with the Sisters Leadership Council the most. It is that interaction in a loving community that takes her back to St. Augustine. Traditionally, her order calls for the sisters to live in community, but in recent years that has been a challenge.

As she sets out on this new venture, Sister Power said she is constantly reminded of the verse from Hosea 2:14, “I will lead her into the desert. There I will speak tenderly to her.” It is not because she sees St. Augustine as a desert, but as an opportunity to strengthen her courage and trust in God as did the Desert Fathers. “Sometimes life brings unexpected changes and you have to go out into the desert to see the good that it can bring,” she said. “May you have the courage to go out into your own deserts and see what God has in store for you.”

Sister Power will be working in ministry at the St. Joseph Renewal and Retreat Center in St. Augustine and invites everyone from the diocese to visit.