Soup for the soul helps heal the homeless 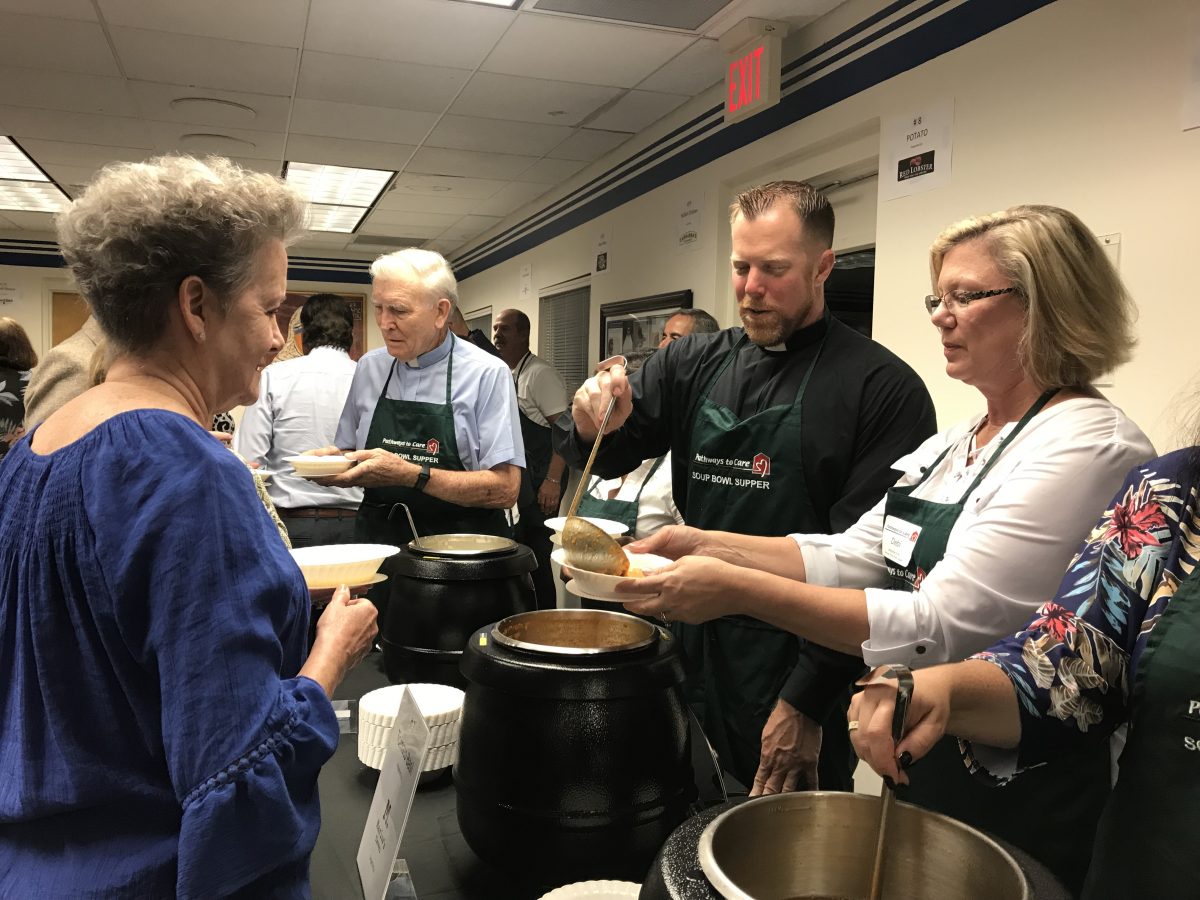 St. Stephen pastor Father John Bluett (left) and Pathways to Care proponent, and Father Josh Swallows, director of vocations, serve soup at the annual Soup Bowl Supper fundraiser at St. Mary Magdalen Parish, Altamonte Springs, Oct. 26. Pathways’ resident and speaker, Rick, considers himself “one of the lucky ones” because he was spared in Pulse Night Club shooting, because he was able to recover, and because Pathways stepped in. (GLENDA MEEKINS)

Keynote speaker and Bishop Moore High School graduate Fred Lauten, a former Chief Circuit Judge of the 9th Judicial Circuit, shed light on the matter of homelessness. He cited Central Florida as second in the nation after Los Angeles County when it comes to a lack of affordable housing. His experience on the bench granted him the opportunity to see the issues firsthand. Illness and the inability to afford rehabilitation often leads to loss of employment, eviction and homelessness. He spoke of how mounting fines for illegal camping and other circumstances create additional financial distress—in addition to a severe mental health crisis. Lauten said, “We pride ourselves in being the third largest state, yet we are 50 in the nation, per capita, in mental health funding.” He said helping the homeless is “our spiritual and civic responsibility… It’s ultimately a test of our love for our fellow human beings.”

Pathways to Care did all of that for Rick, a resident who shared his story with sincerity and gentle humor. Rick became troubled after the Pulse Night Club shooting in June 2016. While not physically wounded, witnessing the tragedy and burying 14 friends in nine days took a psychological toll. After that, he became severely ill with a brain and spiral cord infection leaving him unable to walk or talk. With the help of therapists and doctors, he relearned the fundamentals of everyday living, but lost his job and apartment. He considers himself “one of the lucky ones” because he was spared at Pulse, because he was able to recover, and because Pathways stepped in.

“Every night I prayed and thanked God for the food in my stomach, the roof over my head, and the pillow underneath it,” said Rick. “I received counseling, support, medical care, transportation, but I would also be given the things that I didn’t realize were missing from my life—routine, balance, humility and hope.”

Rick now has a job and is almost ready to move into his own apartment and play the cello again. He reminded everyone it was only possibly thanks to their generosity. Recalling his Irish heritage, he noted the Christian interpretation of the significance of the clover: Christ beside me, Christ before me, Christ behind me, Christ within me, Christ beneath me, Christ above me. He added, “I continue to be one of the lucky ones.”