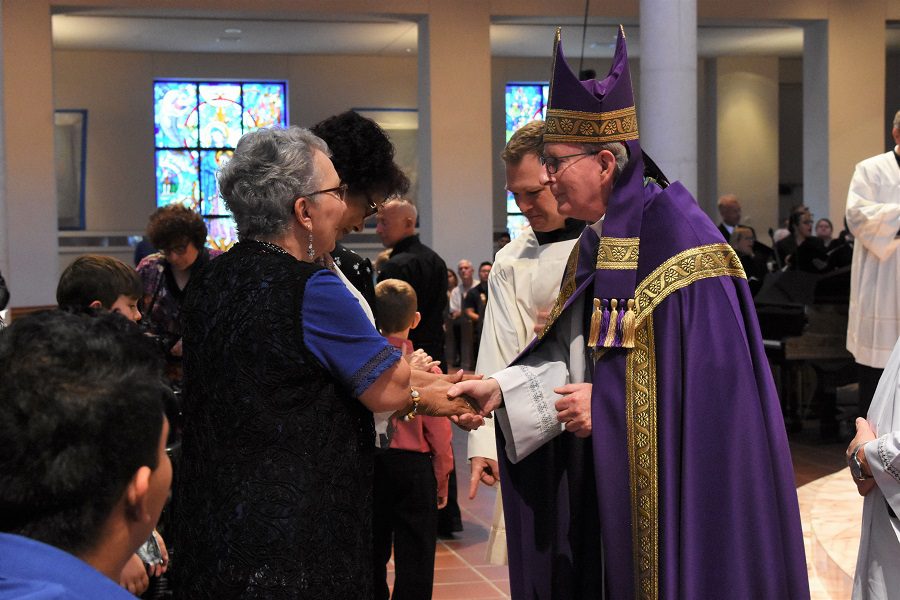 ORLANDO | Friends and family beamed with pride as more than 500 catechumens assembled before Bishop John Noonan, March 10 at the Basilica of the National Shrine of Mary, Queen of the Universe in Orlando. This Rite of Election marks a significant milestone in each person’s walk toward becoming full members of the Catholic family and they couldn’t do it without a faithful sponsor or godparent by their side.

Coming from all corners of the Diocese of Orlando, various corners of the world, and even different faith backgrounds, these men, women and youth (age 7 or older) professed their readiness for their next step as “elect” in the Rite of Catholic Initiation of Adults (RCIA). Their sponsors will continue to accompany and guide this hopeful group to full initiation at the Easter Vigil and beyond.

Linda Ramsaran of St. Jude Parish in Ocala is 63, but her call to Christianity began as a child growing up in Guyana in South America. “My parents were Hindus, but we were living in an environment where there were more Christian people,” Ramsaran explained. As a consequence, she went to bible school and even learned Scripture as a young girl. She studied the Gospel of Luke and the Acts of the Apostles and learned the Our Father prayer. She later taught in a Catholic school, until the government took it over in 1985. Yet her journey would not end there.

Ramsaran first married a man of the Islamic faith. After he died, she met Alfred, a fellow Guyanan and practicing Catholic. Soon she began attending Mass with him. They fell in love, moved to the United States, and married in 2016. It was not until last summer when they went to the Holy Land that she felt compelled to join the Church. “We (Alfred and Linda) renewed our vows in Cana, bathed in the Jordan River,” said Ramsaran. “I was moved. All I heard and experienced brought me closer to the Lord. I regret I did not know more sooner, but I believe it is all in God’s time.”

Counselled weekly by Deacon Ed Mazuchowski, Ramsaran zealously absorbs what she is learning, often sharing deeper questions with her sponsor, Deacon Ed’s wife, Louise. “There’s a lovingness about her that is so special,” shared Louise. “You can look in her eyes and see the discernment that she made to take this journey. It’s a definite yes. She has the innocence of a child in loving the Lord. It’s beautiful.”

The Catechism of the Catholic Church states that the role of the Confirmation sponsor is to, “Continue to help the candidate along the road of Christian life, to safeguard and develop the grace given at Baptism and now sealed with the Holy Spirit.” (CCC, 1320)  Ramsaran calls Louise daily and Louise in turn prays for Ramsaran and answers her questions. “A sponsor is a confidante,” said Louise, who served as a director of religious education when she lived in New York. “I keep it all in my heart and pray on it. I use all my formation and what I continue to learn helps me know the Catholic Church.”

Although it is best if a sponsor has a strong formation, it is not required. The Code of Canon Law (Canon 874) states that, “a sponsor must be a Baptized and Confirmed member living a life in harmony with the Catholic Church.” They should be willing to seek the answers with and for their catechumen. “Sometimes, even what you don’t know, the Holy Spirit puts it upon you,” affirmed Louise, indicating an openness to the guidance of the Holy Spirit is critical.

José Luis and Aracely Procopio of San José Mission in Pierson can vouch for the Holy Spirit’s work in their lives and that of their catechumen. Durham was 9 years old when he asked the Procopios to be his godparents. Two years later, when the moment came, he remembered and asked again. “We couldn’t say no,” said José Luis. “It is a great commitment that we have before us.” He explained, “The role of sponsor and godparent is important because we are like second parents for him (as is Mexican custom). We are there to support him in any way we can. It was a great surprise for us when he asked. We figured he would forget. But he stayed firm in his desire so we said, of course.”

Aracely agreed, “It is a great responsibility and blessing. Not just anyone is asked to be a godparent, especially of Baptism. It is not just to have them Baptized, but to insure that the child practices his faith and fosters love for the church, as well as to be a good example.” She noted, “He (Durham) is just now beginning his faith journey. He joins his parents in formation as well, although they will not be confirmed until later. They endured a great test as a family. The trial called them to bring their children and themselves to the Sacraments.”

Being a sponsor requires patience and a willingness to meet catechumens where they are on their journey. “Some of our programs go a little too fast,” explained Deacon Mazuchowski. “Sometimes it may be a bit over their head.” Louise describes the sponsor’s purpose as “almost like being a best friend. If you need someone to talk to that you know will accept whatever you’re feeling at that particular time, that whatever question you have, there is no judgement.”

She adds, “It’s not an easy walk to do with somebody, but it is an enjoyable walk. I would love for every person in our church to be a sponsor and walk with a catechumen. It’s the most wonderful thing… It takes commitment, time and total trust.”