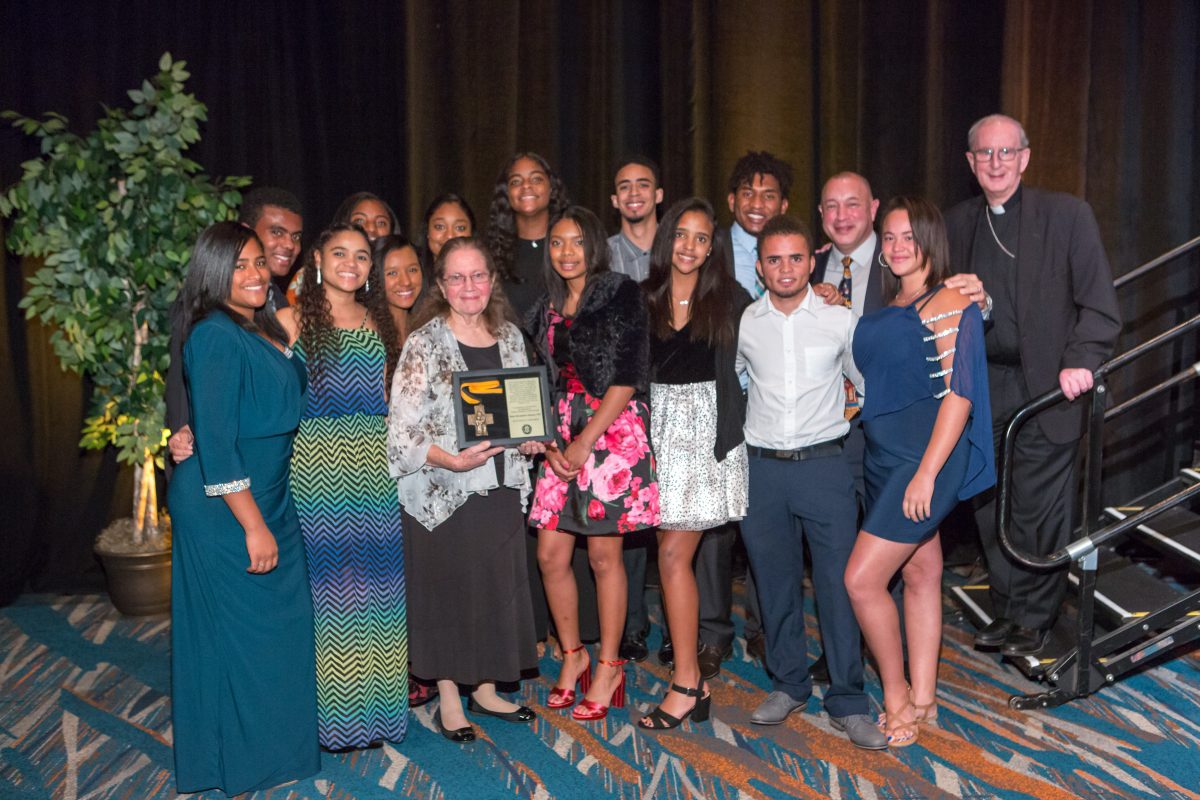 ORLANDO | Working for the last 28 years as mission office director in the Dominican Republic has been a labor of love and a dream realized for Ursuline Sister Bernadette “Bernie” Mackay. In recognition of the hundreds of lives she changed in our sister Diocese of San Juan de la Maguana, Bishop Moore Catholic High School honored Sister Mackay at the annual Legacy Gala, Nov. 16 at the Rosen Shingle Creek Resort in Orlando.

The Legacy Gala honors individuals with great influence on Catholic education, particularly in the Diocese of Orlando. “Through her determined ‘YES’ to God’s invitation, our diocesan schools have been impacted by this mission in multiple ways,” said Bishop Moore President, Thomas Doyle. “First, the mission office, under her direction, has provided opportunities for thousands of people from our diocese, many of them teenagers, to participate in mission work for a week or longer. Through this invitation, our students, teachers, and alumni have traveled to the fringes to serve and, inevitably, to encounter the face of Christ in those we have served.”

Since she took her first vows in August 1965, Sister Mackay began teaching and ministering to the poor in Guyana, Barbados, Caracas, New York and later through the Farmworker Ministry (now Hope CommUnity Center).

When she arrived in our sister diocese of San Juan de la Maguana in 1991, many of the communities in that part of the Dominican Republic had poor nutrition and no formal education. Today there are four Catholic Schools and a high school residence program operated by the Diocese of Orlando, with nearly 500 students.

In 2012, Sister Mackay obtained scholarships for students to attend Catholic schools in the Diocese of Orlando. “We had some very academically strong students who were showing some leadership potential. They were living in these very isolated villages,” explained Sister Mackay. “They could be an inspiration to the other kids in the village, showing them the world was bigger than the village.”

To date, 20 students have participated in the program, and six attended Bishop Moore in Orlando. “Each of our Catholic High Schools in the diocese have benefited from hosting students from our sister diocese as students in our own schools,” said Scott Brogan, Bishop Moore principal. “Their presence on our campus has inspired an enthusiasm for learning and a deep sense of responsibility. Our students learn as much from them as they learn from attending BMC.”

Sister Mackay’s desire to “bring the fringe to the center” is a goal she continually pursues and achieves. Most of these students return home to re-invest in their communities. “We are beginning to see on this end (the D.R.) that we all have a place at the table and I think that’s the other reason for the children coming to the U.S. It’s extending our experience of mission and about this diocesan relationship. It’s become a lived reality—not ‘them’ out there. Now ‘them’ are at home with us, around our dinner table.”

Bishop John Noonan and Doyle presented her with the award, a small token of their appreciation. Uncomfortable with gifts, Sister Mackay said she believes the change is occurring as a fruit of the efforts borne by the successful Dominican residents. “It speaks to the other children about what they can dream,” said Sister Mackay. “The dream is not for now. The dream is beyond the tomorrows that don’t seem possible.”

By Glenda Meekins of the Florida Catholic  November 18, 2019