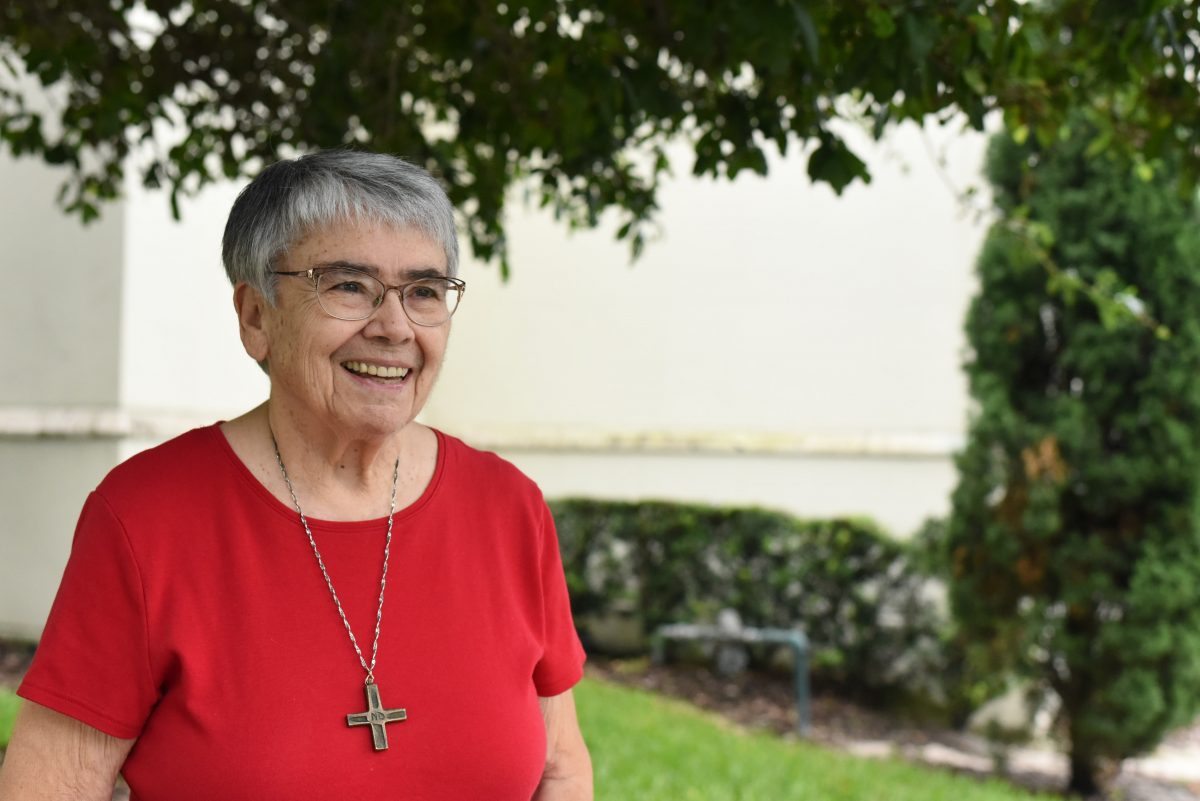 ORLANDO | Sister of Notre Dame de Namur Patricia O’Malley came to her order in the 1960s, in the midst of the civil rights and farmworker movements, the closure of the Second Vatican Council, and the height of the Vietnam War. She recalls those early years. “There was so much going on and people were out there standing up for the poor and people’s rights. It was such a remarkable time. I’m so glad I was there.” Her work as a Sister of Notre Dame de Namur reflects the impact of those events and the course they set for her life as a religious.

An only child, she longed for siblings. Born in Detroit, MI, she remembered, “I was kind of a spiritual little kid. I loved going to daily Mass and praying novenas with my mother, especially when we lived in Boston.” The priest allowed her to light the candles. “That was a big deal, especially in the 1950s—especially a little girl up on the altar,” she notes with a mischievous look.

It was there, at age 10, she decided she was going to be a sister. “It always stayed with me,” she said.

It was not until the 8th grade, living in Virginia that she decided to join the Sisters of the Precious Blood, the religious who taught in her school. She persuaded a friend, Louise, to go with her. Thinking Sister O’Malley was along for the ride, the reverend mother accepted Louise and denied Sister O’Malley. “It was the hand of God,” she noted. When she got to high school and encountered the Sisters of Notre Dame de Namur, “That really clinched it,” she said. “They were really happy people. They were fun to be with – very education minded. They were human.” It was there she found the “siblings” she always wanted.

As the effects of Vatican II began to take form in religious orders and parish life, she read Cardinal Leon Joseph Suenens’ The Nun in the Modern World and noted how “that exploded everyone’s mind.” She devoured the encyclicals of the time, trying to live them. “They’re as pertinent today as they were back then,” she said.

The order lost many sisters. “Some felt we were not moving fast enough, while others felt we were moving too fast. We had the upset of the people in the parishes and communities…” Although the peasant dress and bonnet were gone, the values on which the sisters were founded remained. They went forward donning a cross with their foundress, Sister Julie Billiart’s words on the back, “How good is the good God.”

For Sister O’Malley, that means, “Being appreciative of God’s goodness every day” and His beauty in others. “That can be challenging, particularly these days… It’s a whole spirituality in itself. You need a contemplative stance to do that because it calls for a sense of presence.”

She offered that presence through works of social justice. Focusing on education, she became a teacher and volunteered for an experimental school in the poor neighborhoods of south Boston. The idea was to “make the hopes, dreams, and suffering of the people your own.”

“We noticed the children lacked a positive self-image and self-esteem,” she said. She responded by earning a master’s degree in the Montessori teaching method and opened a Montessori school in the projects. “We saw education as a way for these children to begin to change, first themselves – then to move out of the poverty cycle.” In the morning they taught. In the afternoon they visited the families. Today the school thrives with an infant and toddler program and a women’s education center, “to educate and empower mothers” helping them become “the women they were meant to be.”

In 1981 sister responded to the call of the Spirit by accepting a position at St. Margaret Mary Parish in Winter Park as director of family life and social justice ministries. With the support of Monsignor Richard Walsh and Ruth Bliss, she established a Thanksgiving and Christmas store for needy families, advocated for social justice, and even traveled to Nicaragua as part of Witness for Peace.

As a regional advocate she worked at St. Ann Parish in Debary, St. Mary Magdalen in Altamonte Springs and Our Lady of the Lakes in Deltona. Meanwhile, she earned another master’s degree in marriage and family counseling. Together with Sister Ginny West, SNDdeN, she began a counseling center in Winter Park. Her training in marriage and family therapy became useful as court expert for the marriage tribunal. The two sisters also designed and led convalidation workshops, currently led by a team of volunteers at Sts. Peter and Paul Parish in Winter Park.

Always active, she continues serving St. Mary Magdalen and is involved in St. Margaret Mary’s mission work in Haiti. As a delegate in her order, she hopes to attend the sisters’ international chapter meeting in Nairobi next year.

Today Sister O’Malley’s advocacy roots remain strong, though more subdued, addressing the issues of racism through participation in social justice activities at St. Margaret Mary. She leaves the heavy lifting to the next generation, of which she is profoundly confident.

“Our sisters know the mission is going to carry on through our associates and AmeriCorp volunteers. That gives us hope that we’re not dying,” she said. “Maybe vowed life is changing, but the legacy will still be there. These young people are dynamite. It’s evolving, although it may not look the same.”