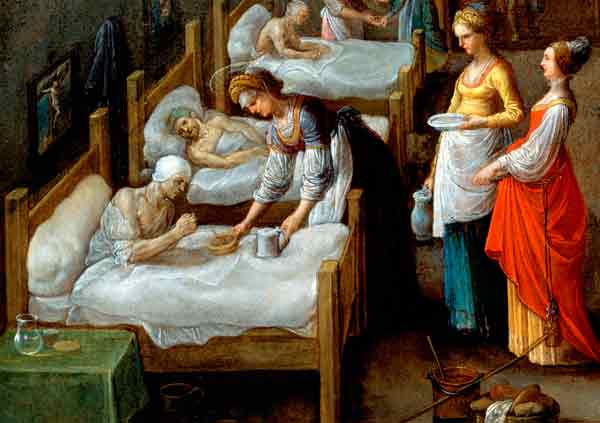 During this Jubilee Year of Mercy, how do we become merciful like our heavenly father?

The saints of the Church can be our guide! They lived during complex times that challenged them in many ways. They overcame daily struggles with faith. During the last few months The Florida Catholic has highlighted saints of mercy who blazed trails showing us the path to heaven with merciful hearts. These men and women have demonstrated works of mercy, they depended on God’s love and grace to make this possible.

This saint reminds us of the corporal works of mercy to feed the hungry, give drink to the thirsty, shelter the homeless, visit the sick and give alms to the poor.

St. Elizabeth of Hungary was a princess of the Kingdom of Hungary. Despite her royal birth and great wealth, she viewed her life from the lens of God’s mercy, feeding the hungry, giving her own clothes, treasures and alms to the poor, and building hospitals to care for those who were unable to care for themselves.

St. Elizabeth was born in 1207. When she was four years old, she moved to Thuringia, in central Germany, to grow up in the culture in which her future husband, Ludwig IV, lived. As was customary of the times, an arranged marriage between the two would solidify the political and economic needs of both families.

Although surrounded by the trappings of secular life at court, St. Elizabeth grew up as a very pious child, praying and practicing small acts of self-mortification. At 14 years old she married Ludwig who wholeheartedly supported her charitable works.

Elizabeth is best known for her miracle of the roses. When taking bread to the poor in secret she came upon a hunting party in which Ludwig was a member. Probably to appease the gentry who believed Elizabeth was stealing treasures from the castle, Ludwig asked her to show what was under her cloak. Her cloak fell open to reveal white and red roses instead of bread. This proved to Ludwig that God was protecting Elizabeth’s merciful works.

In 1221 Franciscan friars arrived in Germany and made a deep impression upon Elizabeth. The more she learned about the charitable ways of Francis of Assisi, the more she lived them.

In 1226, floods, famine and plague wreaked havoc in Thuringia. While her husband was away, Elizabeth took control of the affairs of state, and distributed alms, state robes and ornaments to the poor. She also built a 28-bed hospital and daily visited the sick to personally attend to their needs.

When her husband died of fever, Elizabeth moved to Marburg in Hesse. And made vows similar to what a nun makes today. In spite of her family’s admonishments, she refused to remarry, and used her dowry to help those in need. She built a Franciscan hospital in Marburg and again personally cared for those in need. It is said that she sought out and cared for those with the most horrendous diseases of the day, including but not limited to scabies, incontinence and leprosy.

Elizabeth died at the young age of 24, “worn by compassion.” She was canonized just four years after her death, and subsequently was proclaimed the patroness of Catholic Charities.

How can you follow St. Elizabeth’s examples to give freely of yourself to others?

The mission of Catholic Charities of Central Florida is to provide vital societal services to people in need regardless of their religious, social or economic backgrounds, to improve the lives of individuals, families and the community. Its vision is that every person’s basic human needs are met through love and empowerment. It honors a non-discrimination policy.

Volunteers are needed to promote justice and advocacy, help alleviate hunger and prevent homelessness, provide access to healthcare, care for immigrants and refugees, and assist with the needs of its community partners.