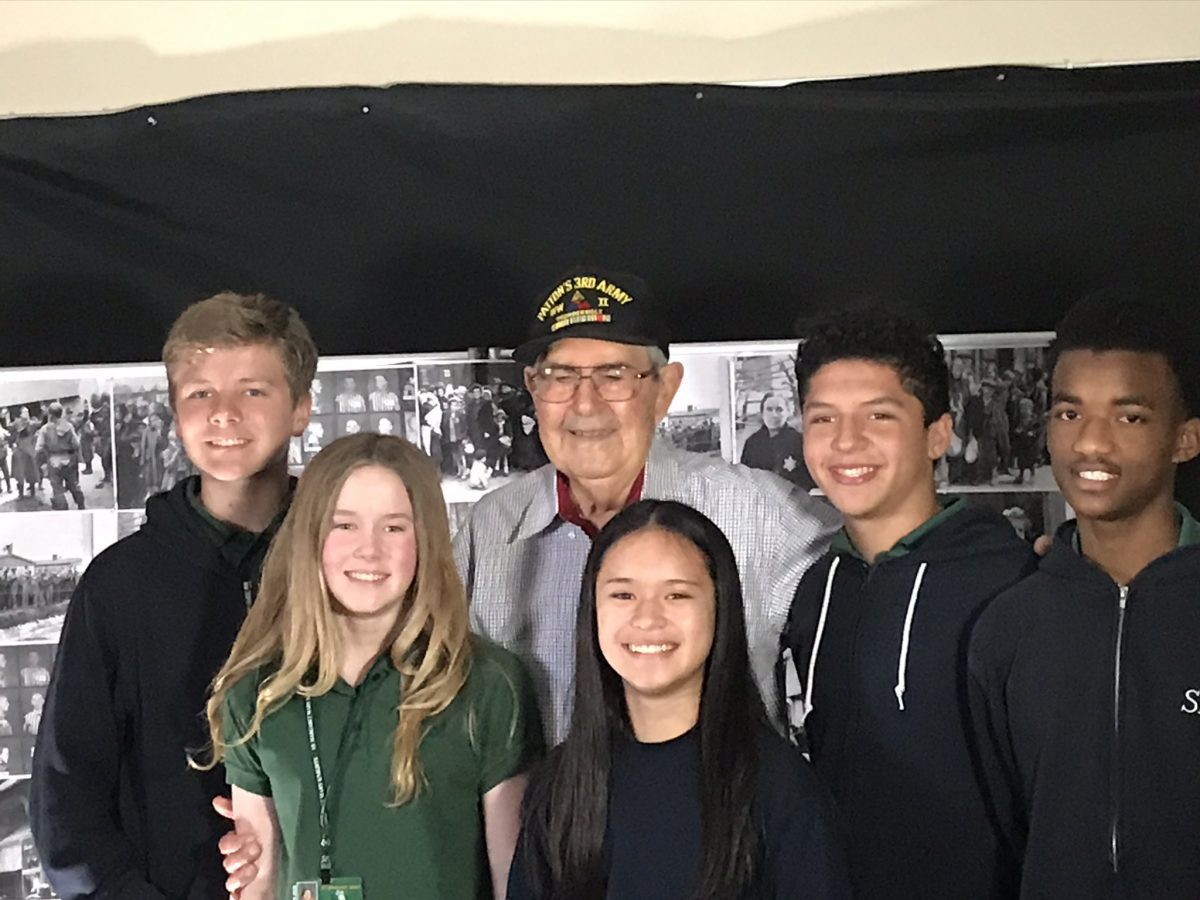 WINTER PARK | Sonja Marchesano’s mother smuggled out the family’s silver Shabbat candlesticks in the baby’s basket when they were forced to flee Germany in 1939. Harry Lowenstein hid for two days in a stack of automobile tires to hide from Nazi soldiers. Helen Greenspun survived in a concentration camp on one piece of bread and a bowl of watery soup each day. Eighth grade students at St. Margaret Mary Catholic School in Winter Park heard these and many more stories of bravery as they learned about the Holocaust this year. But these stories didn’t come from their teacher or a textbook, the students heard the stories from the survivors themselves. The school participated in Names Not Numbers, a unique program that makes students the “witnesses to the witnesses” as they record oral history testimonies from Holocaust survivors and World War II veterans. In the program’s 16-year history, this is the first time a Catholic school has taken part. 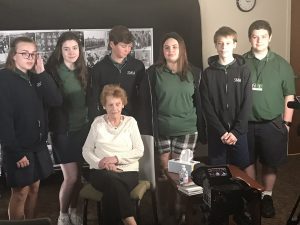 “I remember talking about the Holocaust with my parents a few times throughout my life but I didn’t really comprehend it until we had the opportunity to do Names not Numbers,” said Max, a St. Margaret Mary student.

“I feel like this experience changed me because I will never look at the Holocaust the same way after knowing what everybody went through,” agreed classmate Camden.

Survivor Eva London-Ritt and liberator Gilbert Waganheim were also interviewed, telling stories of their lives before, during, and after the war. Meeting Holocaust survivors and recording their stories is the culmination of months of preparation. Under the Names Not Numbers program, students first learn interviewing techniques from a professional journalist and filming and editing techniques from a professional filmmaker. They were mentored throughout this process by their English and Language Arts teacher, Ms. Leslie Priede. Students spent time doing their own research for historical context. From coming up with the questions to operating the cameras to editing one hour of material into a 20-minute documentary – everything was done by the students. In addition to the oral history film, a documentary was also made chronicling the process and including reflections from the students and clips from the interviews. This film, “Names Not Numbers: A Movie in the Making” premiered virtually on June 3, hosted by the Holocaust Memorial Resource and Education Center of FL. Over 160 people tuned in to watch the film and participate in the student panel that was held online afterwards.

“The film is a prayer. How poignant and extraordinary that in Scripture the Hebrew people speak about a Holocaust to God; a sacrifice to God and Jesus, a Jew, is the ultimate sacrifice to give us everlasting life,” said Carol Brinati, chief operating officer of the Diocese of Orlando, after viewing the film. “May our living be of this sacrifice of Jesus, God’s gift of love — the absolute Holocaust — so all life would come to be in its fullness.”

The purpose of the program is not only to tell the stories of the Holocaust but also to inspire future generations to combat anti-Semitism and all forms of hatred and intolerance.  When the students began work on the documentary in the Fall of 2019, there was no way to know that it would premiere in a time of national unrest and protests of racial discrimination, making the message of the survivors more timely than ever.

“Any child who’s born is a human being…we are all human beings,” said Greenspun. “You should remember, this happened in my lifetime. This is not a story or a film. I lived through it.” “Learn from the past and make what’s in front of you better than it ever was before,” entreated Lowenstein. “If you don’t tell the story it will happen again.”

St. Margaret Mary students are ready now more than ever to carry the torch. As likely the last generation who will be able to meet Holocaust survivors and World War II veterans, they are now committed to keeping their stories alive and empowered to stand up to hatred by spreading the love of Christ.

“I learned from Sonja to treat everyone with respect and treat people the way you would want to be treated. I hope to spread the word to future generations and to my family about the experience I had with her and what I learned,” said Emily, part of the student team who interviewed Marchesano.

“These 8th grade students at St. Margaret Mary, are so impressive. Honestly, so impressive and mature and caring and empathetic that it is one of the few things giving me hope right now in such a chaotic world,” expressed Rachel Luce-Hitt, education director at the Holocaust Memorial Resource and Education Center of Fl.

“Student after student has remarked that their participation in the Names Not Numbers project and their encounters with the survivors has forever changed them,” said principal Katie Walsh. “It is our sincere hope that this video and the entire Names Not Numbers experience will continue to foster respect for the value and dignity of each person.”

The film will be available to watch at www.holocaustedu.org/event/film/ until June 17th.

By Elizabeth Wilson special for the Florida Catholic, June 4, 2020