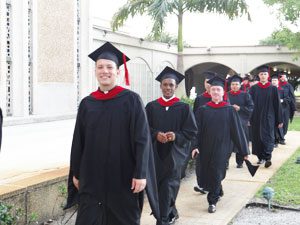 Three of the four newly ordained priests in the Diocese of Orlando graduated from St. Vincent de Paul Regional Seminary SVdP) in Boynton Beach, as did Annunciation pastor, Father Stephen Parkes. Although it has been 15 years since he left the hallowed halls of his alma mater, Father Parkes’ face still lights up when he speaks of the spiritual and personal growth he experienced while studying at the seminary. In fact, if you ask his parishioners at Annunciation Parish in Altamonte Springs, they will chime in unison Father Parkes’ repeated declaration that “St. Vincent de Paul produces only the finest of priests.”

“I think Vincent de Paul helped me discover gifts I never knew I had,” said Father Parkes, who now sits on the seminary’s Board of Trustees. “I have so many fond memories. Still, what touches me most is the growth that took place while I was there and the discovery of where is God calling me to be. St. Vincent de Paul made a difference in my life because its environment of prayer, study and fraternity really helped me discern where God was calling me. It was a positive experience and I am glad I said yes.”

SVdP has been forming men for the priesthood for 50 years. The seminary traces its beginnings to the Mother Diocese of Florida, when Archbishop Joseph Hurley, 6th Bishop of the Diocese of St. Augustine, purchased 80 acres of land west of Boynton Beach in 1955. During the next eight years, buildings were constructed and the seminary opened in 1963. It is the only Roman Catholic theologate in the Southeastern United States. A theologate is an institution which provides the last four years of study for candidates for the priesthood. Today, the seminary has more than 500 alumni, with more than 300 men serving in parishes throughout the state of Florida.

Monsignor David Toups, president/rector, said that SVdP is unique in that it is one of two bilingual seminaries in the nation and it is owned by the bishops of the seven dioceses in Florida.

“The St. Vincent de Paul Seminary is one of the best kept secrets in the Catholic Church in Florida,” said Monsignor Toups. “It is a great treasure for the faithful insofar that it really gives people hope, as is reflected in the increased number of men entering next year’s class.”

There are 90 men enrolled in next year’s class, up from 56 in 2008. To accommodate increased enrollment and continued growth, the bishops of Florida have approved and are supporting at capital campaign to renovate and expand the seminary facilities.

There are four levels of preparation for the men. He said men are formed on four levels: human formation, in that they learn how to be the best Christian gentlemen they can be; spiritual formation where they are taught how to encounter Christ in their daily prayer life so that they can teach others; intellectual formation which encompasses the academic aspect of their training; and pastoral formation where they experience a variety of pastoral assignments, including working in local parishes, prisons, hospitals, schools, campus ministries and more.

“We strive to help them become shepherds after the heart of Christ,” Monsignor Toups said.

Bishop John Noonan is proud to be associated with the seminary.  “Because the seminary is owned by all of the bishops of Florida, it is a gift to all of the dioceses, not just one,” Bishop Noonan said. “As such, we are very proud of the young men who have graduated from St. Vincent de Paul as well as the priests who have been ordained and are now serving in many of our parishes as pastors and associates.”