State Champions Step Up to the Plate in Prayer

Sam Atwell, a recent graduate of Trinity Catholic High School, was thrown into the sports spotlight when in the last inning of the semifinal game of the Florida Class 4A state playoffs on May 14, the right fielder went full extension to catch the game tying run, ultimately claiming a victory for the Celtics against Bishop Verot High School from Ft. Myers. 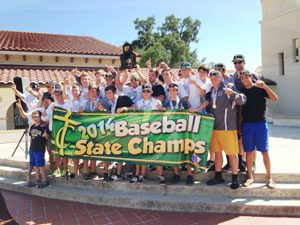 Sam Atwell, a recent graduate of Trinity Catholic High School, was thrown into the sports spotlight when in the last inning of the semifinal game of the Florida Class 4A state playoffs on May 14, the right fielder went full extension to catch the game tying run, ultimately claiming a victory for the Celtics against Bishop Verot High School from Ft. Myers. His incredible catch has been featured in local and national news and has gone viral with nearly 88,000 views on YouTube.

The next day, the varsity team went on to the win the state championship –the first state baseball championship for the school and Marion County – beating Pensacola Catholic High School, 3-1.

However, despite being in the limelight, the 18-year-old, who has signed to pitch for Florida Southern College in Lakeland, where he plans to study physical therapy, remains humble, remembering where credit is truly due.

“It has been crazy but everything goes back to the glory of God,” Atwell said. “I wouldn’t be here without Him. He gave me the ability and talent to play baseball, so I give thanks to God.”

Coach Tommy Bond said God has always been at the center of the team. Before and after every game and practice, the team would huddle together and pray as a family. He said at first, he would lead the team in prayer, but as the season progressed, he urged the teens to take charge.

“I started asking kids to step up, equating the idea in other areas of their lives,” Bond said. “There are times when you have to step up and take charge; you might as well do it in your prayer life as well.”

“They really did well,” he continued. “I told them I wasn’t looking for an elaborate Fr. Pat (Sheedy) type prayer. I told them to speak from the heart and it will be fine.”

Bond said initially the young men were hesitant, but eventually all stepped up to the plate.

“I think everybody is a little bit uncomfortable praying in front of a group,” Bond said. “Some of them were long, some were very short, some of them stumbled through it, but it was a great learning experience, and the bottom line is we are lifting up prayer to the Lord and that is what is important.”

The ritual had an impact on the teens as well.

Pitcher Jesse Lapore, who has been signed by the University of Miami to play baseball and plans to study sports administration in college, said, “Just like everything else, the baseball season had its ups and downs, and when it had its downs, you can’t just stop believing. You have to know that you can overcome all of the adversities and obstacles with God on your side.”

Teammate Dash Winningham, who has signed at Florida Gulf Coast University in Ft. Myers and will study business or sports management, concurs.

And as he prepared to process down the aisle during the celebration of the school’s baccalaureate Mass at Blessed Trinity Parish on May 21, Atwell said he will take with him many fond memories from Trinity Catholic High School.

“Trinity has been a great experience, especially from the religious point of view,” he said. “It is awesome to be able to go school and to be able to pray and have God in every class. Finishing the year by winning the state championship with my brothers — I couldn’t imagine a better way to end it.”

“These were a special group of kids,” Bond said. “They were very hard working. They enjoyed being around each other. They are a very tight knit group with a deep faith in God. I think that was their strength.”