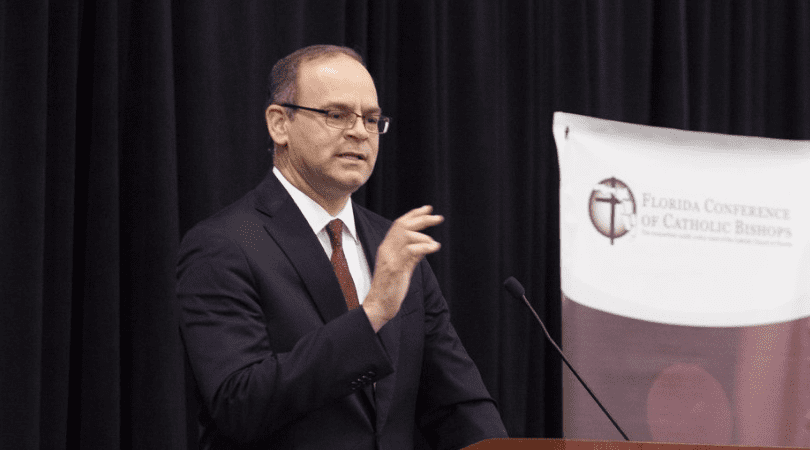 TALLAHASSEE, FL – The following is a statement from Michael B. Sheedy, Florida Conference of Catholic Bishops (FCCB), executive director, on final passage of SB 168 sponsored by Senator Joe Gruters (R-Sarasota):

Today’s passage of state-level immigration enforcement legislation is disheartening. There are many, including members of the Florida Legislature, who are frustrated that Congress has not enacted needed immigration reforms. However, immigration law is, and should remain, in the purview of the federal, not state, government.

The FCCB is concerned that SB 168 goes further than required by federal law. Because it applies to anyone in custody, it subjects more people who have not been arrested for, charged with or convicted of a crime to higher scrutiny of their immigration status.

As was noted in the debate on SB 168, no Florida jurisdiction offers ‘sanctuary’ to criminals, regardless of immigration status. This bill will not improve public safety. Our communities will become less safe as undocumented immigrants who are victims or witnesses of crime will remain silent for fear of deportation of themselves and/or loved ones. Immigrant families will be at greater risk of being torn apart, including the separation of parents from their citizen children. Those persons whose toil and labor our nation has accepted, and for which it has created a demand, will be driven even further into the shadows.

The FCCB opposes enforcement-only measures and has long called for comprehensive immigration reform at the federal level. We renew our call today and urge Congress to bring people out of the shadows by allowing a pathway to citizenship, expanding family reunification and employment-based visas, and addressing root causes of migration in sending countries. Targeted, proportional and humane border and other enforcement reforms should be addressed only in such a context.

Via Florida Conference of Catholic Bishops – May 2, 2019