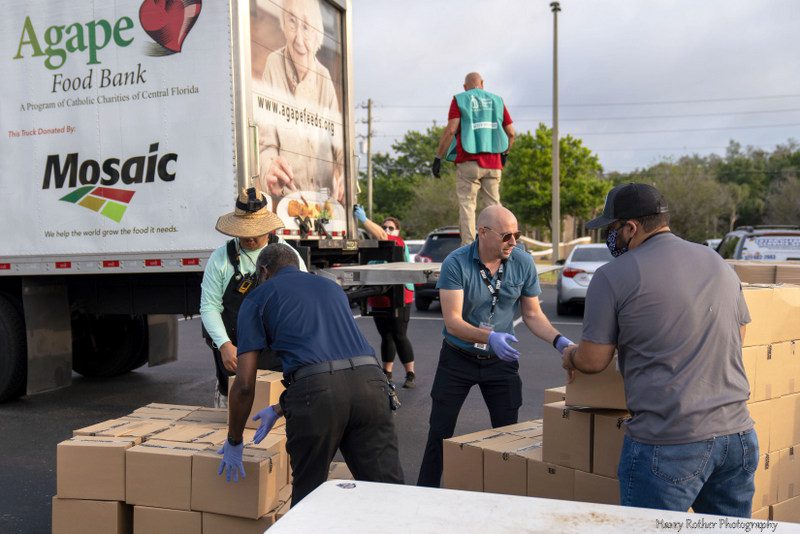 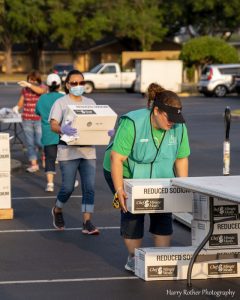 Father Jorge Torres, Holy Redeemer Parish pastor, said most of his parishioners are employed by the service industry, whether it’s the theme parks, hotels, and restaurants or related transportation companies. “When traveling stopped, everything stopped for them. When the government gave the stay-at-home order, they were already doing it,” said Father Torres. He noted, “I couldn’t walk through the parking lot without having two or three people asking me for food. I knew we needed to find a way immediately to secure some food.” He is grateful to all the entities that provided for the food drop and looks forward to its continuation.

The April 10 drop was the second for the parish, but this one took less than half the time due to new methods put in place for safety reasons due to the pandemic. “Today, we tried to organize so folks could put their own things in their own cars. Instead of having separate stations, we pre-packaged much of what we had and set up eight stations so we could process eight cars at one time,” said Gary Tester, president of Catholic Charities of Central Florida. Another advantage was that Second Harvest Food Bank, CCCF’s primary partner for food provision, also sent canned food packaged and ready to go. Ready-to-eat gourmet meals, fresh produce, and butter made up another set of boxes for those who came. The new method enabled a far quicker turnaround, allowing all cars to go through the line in about an hour and a half. 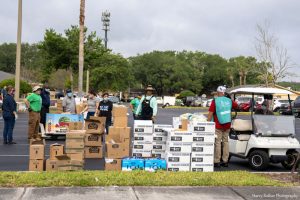 “We were able to do a much better job with safe social distancing; a much better job with very little contact of any kind with vehicles,” noted Tester. He said they discovered the pre-packaged boxes were originally too heavy for older customers, so for this drop, they were streamlined to weigh no more than 15 pounds. Previously, Second Harvest delivered items and CCCF volunteers sorted them, setting up stations for packaging and distribution. Instead, the Holy Thursday drop with ready-made boxes and driver self-loading moved more cars through the line while avoiding physical contact.

As she protected her mouth with her handkerchief, Elizabeth Segura, explained she lived nearby. She worked in a restaurant and lost her job after indoor service to patrons ceased. She has three more mouths to feed at home and said, “I am eager for all of this to end. The desperation of not being able to go out is very stressful. We just want health, peace, well-being and to be free again.” She prayed, “Lord, may it all end well.” She was thankful for the help and said, “It is important to help one another.”

Melissa Quintero was among the last to drive through. She was on her biweekly run to take her daughters to get their free lunch at school when she saw the line of cars. “I was excited when I saw this and thought, oh, thank God,” she said. Her three girls ages 6 to 12 received breakfast and lunch prior to the school closures. Her husband is a disabled veteran and Quintero is his primary caregiver. Unable to leave him at home alone, she makes it to the school a couple of times per week. She said the added meals and snacks have been a strain on their already tight budget. “It’s more of an expense… there’s a lot of stress,” she said. The family misses the daily routine and they are committed to helping her husband, who has PTSD, not get agitated with financial worry. 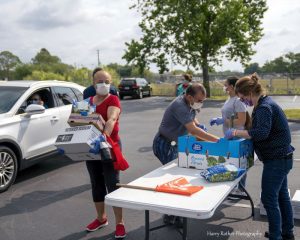 “This helps out a lot with three growing kids. I feel like they’re always hungry,” she said glancing back at them with a broad smile. “This is a point of relief, knowing I can go somewhere, and help is available. We work with what we’ve got,” she added. “We just have to keep on going look for a better tomorrow.”

Tester said the plan is for monthly drops at Holy Redeemer, St. Joseph/St. Maximilian Kolbe Parish in Orlando, the Rosemont Mission Market in Orlando and Resurrection Parish in Winter Garden. Drops will be posted on Catholic Charities’ website.

Although many pantries throughout the diocese have closed due to social distancing regulations, CCCF’s mission market on Semoran in Orlando is still open 8:30 a.m. – 1 p.m., Monday, Wednesday and Friday with a modified pick-up method. Rosemont Mission Market continues to be open Wednesday and Thursday. Tester said efforts are underway to provide food to Polk County and Catholic Charities is working with its food partners in that area to make provisions.

By Glenda Meekins of the Florida Catholic April 15, 2020