Student athletes are formed to be champions of faith 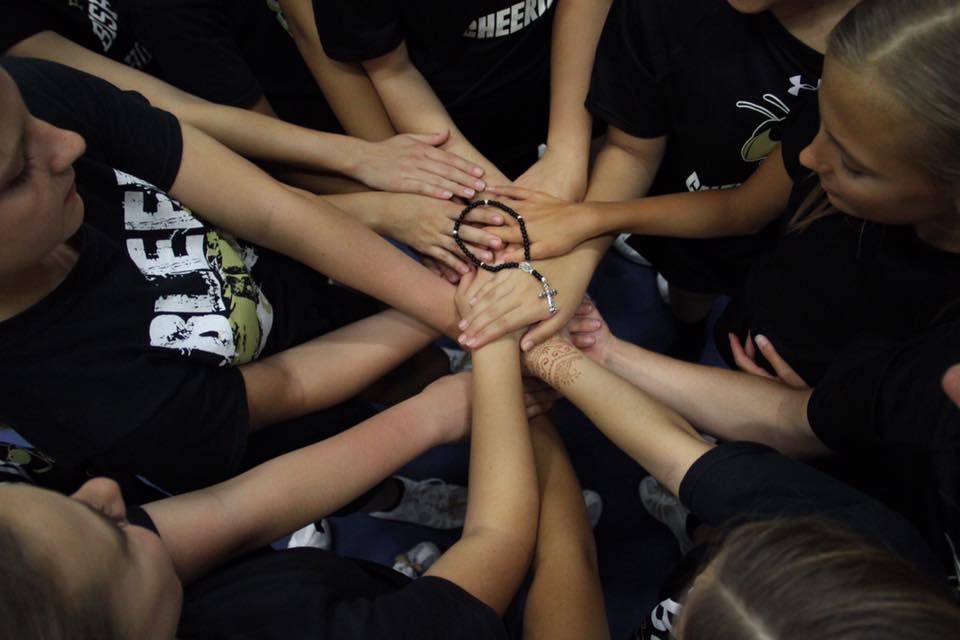 On their retreat, the ’17-’18 cheerleaders committed to being joyful leaders of faith, guided by 1 Thessalonians 5:11 – “Therefore, encourage one another and build one another up, as indeed you do.”

By Glenda Meekins of the Florida Catholic staff – August 30, 2017

ORLANDO | Mass had ended and one by one, the Bishop Moore Catholic High School football players stood and approached the altar. They bent down and picked up a rock with the name of a team member written on it as well as their team motto: “1 Moore for the glory of God.” Then, they walked in silence from the locker room to the three white crosses at the far end of the field, praying as they went. They pray for the team member whose name is written on the stone they carry and will continue to pray for them throughout the week.

This is the third year of the “rock walk”. It all began two years ago when Amanda Livermore, director of mission effectiveness at Bishop Moore Catholic School in Orlando, and several coaches began offering retreats for some of their sports teams. The spiritual and team boost that ensued eventually led every team at Bishop Moore to begin each athletic season with a retreat.

“It’s bringing a lot of team building and bonding, connecting the athletes and coaches at a deeper level,” said Livermore. “It’s putting Christ at the heart of what they do, seeing that the sport in which they’re participating is an extension of using the gifts that God has given them. “We are all at our best when we are with Christ… they’re a better football player, or lacrosse player or whatever it is when Christ is at the foundation and a motivation for what they do.”

Bishop Moore is not the exception. Coaches in Catholic high schools across the diocese are leading students to make the connection between sports, daily life and faith. After being inducted into the Space Coast Sports Hall of Fame in May, Melbourne Catholic High School baseball coach Tom Dooley told the Florida Catholic, “Faith is a big part of our day here at Central Catholic. I truly want our players to know how fortunate they are to be able to attend school, play sports and include their faith each day.”

Dean of student life, athletic director and baseball coach for Trinity Catholic High School in Ocala, Tommy Bond agrees. He said, “We pray before and after games and try to invite other teams to participate with us when we can. I ask our coaches to share their faith with their teams since they are modeling that faith to their athletes.” Trinity Catholic and other schools also have team Masses during the year to kick off the season.

Being an example of lived faith is something that Melbourne Central Catholic athletic director Ed Henry, understands. His coaches pray for the athletes and are currently working with campus ministry so that each team does a service project. He said it’s important for them to get out into the community to give back what they have been given.

According to Livermore, the retreats have changed the culture of sports. “It goes beyond success on the court, but has created a family environment among the team.” Perhaps the volleyball teams’ quote for the season says it best: “growth is never by mere chance; it is the result of forces working together.”

Livermore said the hope is, “that they’ve had a personal encounter with Christ.” She pointed out, “If we can show them where Christ is in the midst of the things that are already very important to them, and in the midst of the relationships that they’ve already formed, then we can say, ‘ Jesus is here too and He loves that you’re doing this for Him.’ Now they know that when they invite Christ into the things that are important to them, they’re stronger; they’re better and that is, to us, the life lesson we want them to take from this.”