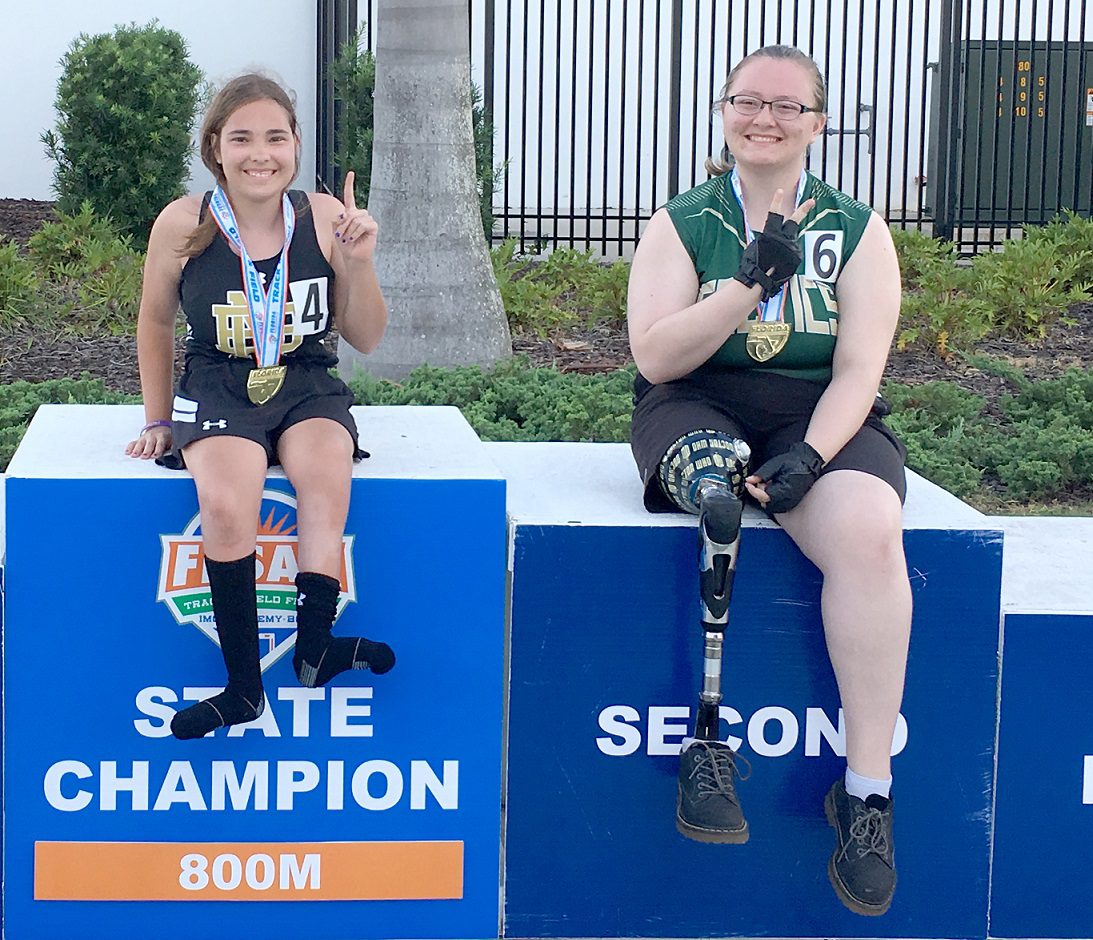 When two students with physical disabilities chose to be a part of the Florida High School Athletics Association adaptive races, the last thing they expected was to win.

Facing difficult challenges is not new for Ashley, a sophomore at Bishop Moore High School in Orlando. Born with spina bifida and being confined to a wheelchair, Ashley never imagined that she would join her parents and brother on a run. So when she was asked if she wanted to join the track team and take part in an adaptive track meet, she jumped at the chance to follow in her families’ tradition. She said her biggest obstacle was believing in herself.

Never having participated in a sport, Ashley admits it was difficult, but she slowly gained confidence in her specialized wheelchair. She said, “To get in additional training, I would ride around our neighborhood or on the trail behind our house.” Ashley’s brother, Nicholas, ran track and cross country. He would set times for her and she would consistently beat them. He said it was awesome to watch his sister in a race. He was not used to being a spectator and it was fun to cheer her on.

Coach Carolista Ware said the experience was humbling. She had never coached an adaptive athlete. “The first day I thought, ‘I’m not sure what to do.’ So we treated her just like the other kids on the team.” Adaptive track athletes are required to participate in at least four regular school track meets, regardless of the number of adaptive competitors.

At the State Championship, there are two classifications for adaptive athletes. Ashley took home state championship for the 200M and 800M races. She plans on continuing throughout high school.

Cheyenne, a senior in Trinity Catholic High School in Ocala had played soccer and softball as a child. At age 12, she was diagnosed with osteosarcoma. After fighting bone cancer and spending a year and half in the hospital, she was told that the tumor was too large to operate. So Cheyenne made the most difficult decision of her life. She chose to have her right leg amputated above the knee to avoid any chance of her cancer spreading. She would miss playing sports.

Five years later she was called out of choir to go to the student life office. Cheyenne remembered thinking that she must be in trouble. She said, “There was this guy there that I didn’t recognize and he said, ‘How would you like to do shot put for the track and field team as an adaptive player?’”

She agreed because she had thought about trying to participate in a sport after the amputation but was always afraid to try. “Having someone reach out to me made me want to set out and push past the limitations I knew I was setting up for myself,” Cheyenne said.

She won the overall 2A division championship for track competing in all three events—the 200M, 800M and shot put. She said she learned that she is good at making excuses for herself “that don’t really hold any water.”

And the experience boosted her faith. The day she was asked to join the team, two months before competition, she participated in the celebration of Mass. The homily was about asking God for things and how He answers in his own time. Cheyenne had long wondered if she could play sports again. She felt that Coach “Beef” Branard’s offer was God saying, “Here’s your answer. Are you going to accept it?”

Both schools’ coaches felt that the experience was a testament to what Catholic schools are doing. Coach Ware proudly stated, “Our kids are inclusive. Our kids are diverse. And they were caretakers for her (Ashley). I think it’s great.”

Ashley’s advice to others: “For those who think they can’t do something, go out and just try. You’d be amazed at what you can accomplish.”