On October 29 – 30, 2011, support the twenty-four seminarians of the Diocese of Orlando during the special collection at all Masses. 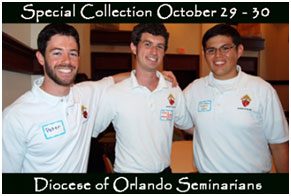 On October 29 – 30, 2011, support the twenty-four seminarians of the Diocese of Orlando during the special collection at all Masses. For those who feel called to be a diocesan or religious priest, the Office of Vocations supports seminarians through their years of discernment and preparation. Currently our seminarians are studying at St. John Vianney College Seminary in Miami, FL; St. Vincent de Paul Regional Seminary in Boynton Beach, FL and Blessed John XXIII National Seminary in Weston, MA. For more information, visit the Office of Vocations home page at http://vocations.orlandodiocese.org/.

A special and annual collection for seminarians in the Diocese of Orlando will be held diocesan-wide on Oct. 30, to benefit future priests in their academic and spiritual needs.

Father Jorge Torres, recently appointed as the Director of Vocations for the Diocese, said the collection will benefit seminarians academically as they study to become priests, as well as their room, board and tuition.

“This is very simple; it’s about the priesthood,” Father Torres said. “We’re hopeful that in the future the number of seminarians begins to grow, and God continues to provide this great gift to us.

Currently, there are 25 seminarians in the Diocese, up from the 22 men in recent years, and nearly every current seminarian originally comes from a parish within the Diocese of Orlando. Most of the seminarians are separated into two groups: collegians, or those early in their studies, who live and study at St. John Vianney College Seminary in Miami, and theologians, those further along, who live and study at St. Vincent de Paul Regional Seminary in Boynton Beach.

“If you think about it, having 25 college kids in a household is expensive,” Father Torres said. “That is what the Diocese has to deal with, making sure we have men preparing to become priests and saying yes to God. The collection is a way for each person that contributes to say yes not only to God and the Church, but also for the person who will be serving at their church for years to come.”

Father Miguel Gonzalez, pastor at St. John Vianney Parish in Orlando and former Director of Vocations, said the collection is also for the annual seminarian convocation at the San Pedro Center in Orlando, which offers workshops and time to build relationships. The convocation also prepares them for four pillars of formation – spiritual, human, academic and pastoral.

“These four pillars are requirements for anyone that is preparing for seminarian life,” Father Gonzalez said. “In order to enter priesthood, they have to have gone through these areas.”

Other programs include seven weeks of Spanish language immersion in the Dominican Republic; parish internships prior to entering the deaconate; a 10-week spiritual formation program hosted by Creighton University in Omaha, Neb., to deepen themselves more spiritually; and a 30-day silent retreat.

Overall, Father Gonzalez said any assistance by parishioners is appreciated by the seminarians, especially since they will stay within the Diocese once they become priests.

“That is the motivating factor,” Father Gonzalez said. “We’re talking about our future spiritual leaders that will provide us the sacraments. The good Lord provides, and we always can provide the assistance the men need. If everyone can give something, it really helps and goes a long way, and the men are very appreciative.”