“I feel called to be a priest today because I have this desire, this love to help people,” said Diocese of Orlando seminarian Ricardo Salgado. 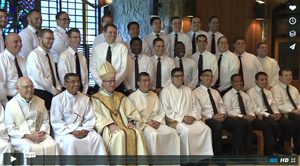 “I feel called to be a priest today because I have this desire, this love to help people,” said Diocese of Orlando seminarian Ricardo Salgado. “The reason I’m able to pursue the priesthood is first of all because I receive a lot of support, not only by prayers but by financial donations of the people of God, especially in our own Diocese of Orlando.”

Salgado is one of 37 seminarians currently in formation for the Diocese of Orlando at two seminaries, St. John Vianney in Miami and St. Vincent de Paul in Boynton Beach. On April 9 and 10, parishioners in the diocese will have the opportunity to support seminarians like Salgado on their journey to the priesthood through the Annual Seminarian Collection. Fr. Jorge Torres, vocations director for the Diocese of Orlando, explains the collection is essential for the seminarians’ formation and that the bishops of Florida believe no one should be turned away from their vocation because of financial difficulties.

“The Diocese of Orlando is committed to the formation of future priests and absorbs much of the cost for seminary tuition, insurance and books, which exceeds $400,000 per seminarian during the nine year formation period. The collection ensures that our seminarians receive adequate tuition assistance”

Father Joshua Swallows was ordained in May 2015 and is experiencing firsthand the benefits of his seminary education during his first year of priesthood. He explained that the blessing of his life as a priest would not have been possible without the financial support he received to attend seminary and give himself fully to his vocation.

“You’ll have some incredible days as a priest. You’ll have days where you did a baptism, and you anointed two separate people who were dying in the hospital and you did a wedding, and you heard Confessions where people unloaded some serious burdens and received the Lord’s mercy. All those things can happen in the course of one day and so at the end of the day, you look back and you see God do so many incredible things in people’s lives and you were a part of that.

“Without my formation and the education I received from the seminary, there’s no way I can do the work that I do. I use the training that I received in all aspects of my daily life as a priest. There’s no other way to put it.”