Texting program helps those in crisis 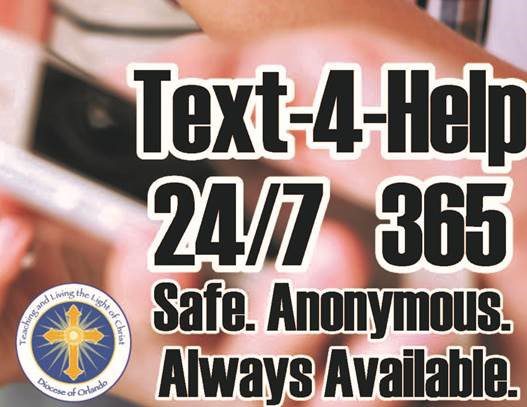 ORLANDO | After a cluster of teen suicides over three months shocked neighbors of Lake Forest, an affluent suburb of Chicago in 2012, families came together to determine how they could help their youth. “It was a shock to the community. These things hadn’t happened here before,” noted Andy Duran of GoLead, the company that created Text-4-Help to provide students a way to anonymously text for help. Diocesan Catholic schools began piloting the program this fall (2020).

“We realized there were significant gaps in getting assistance for mental health, especially in high performing areas,” Duran noted. After numerous focus groups, they came up with the idea of Text-4-Help.

Henry Fortier, superintendent of Catholic schools said, “Text-4-Help is part of our overall school security strategy. Keeping our students safe is not just about locking the front doors and securing the perimeter, it’s also about the mental well-being of those inside the schools.”

After the shooting at Marjory Stoneman Douglas High School in 2018, the Florida Department of Education Office of Safe Schools implemented a program called FortifyFL. Patricia Dailey, associate superintendent of Catholic schools said, “The FortifyFL anonymous tip line was introduced to support school safety by providing a way to report physical threats, but did little to support the emotional needs of our students.” Dailey explained, “Everyday our students are faced with social pressures, stress, difficult situations or just need someone to talk to when feeling down. Text-4-Help is changing the way students reach out for support.” A unique aspect to the program in the Diocese of Orlando is the addition of a code word just for struggling teachers – something never done before.

By Glenda Meekins of the Florida Catholic, November 18, 2020