The Church Must Preach Truth and Justice

Extracts from the Holy Father’s homily on July 15 are given below.

“In this Sunday’s Gospel, Jesus takes the initiative to send the twelve Apostles on a mission… 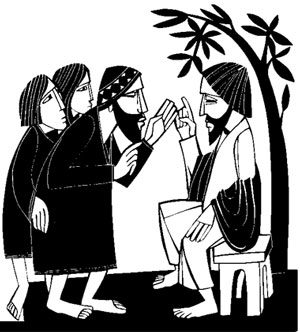 Extracts from the Holy Father’s homily on July 15 are given below.

“In this Sunday’s Gospel, Jesus takes the initiative to send the twelve Apostles on a mission. … The fact that Jesus calls certain disciples to collaborate directly in His mission, is an expression of one aspect His love: He does not disdain the help that other men can contribute to His work, He knows their limits and weaknesses, but does not despise them; indeed, He confers on them the dignity of being His emissaries. Jesus sends them out two by two and gives them instructions. … The first instruction concerns the spirit of detachment: the Apostles must not be attached to money and comforts. Jesus warns the disciples that they will not always receive a favorable welcome: at times they will be rejected, and may also be persecuted. But that should not affect them: they must speak in the name of Jesus and preach the Kingdom of God, without worrying about success. They must leave the outcome in the hands of God.

“The first reading presented the same perspective, showing us that often God’s messengers are not well received. This is the case of the prophet Amos (who) preached with great energy against injustice, especially denouncing the abuses of the king and chiefs, abuses that offend the Lord, and render acts of worship vain. … But, whether accepted or rejected, Amos continued to prophesy, preaching what God says and not what people wanted to hear. This remains the mandate of the Church: she does not preach what the powerful want to hear. Her criterion is truth and justice, even if that garners no applause and collides with human power”.

“The other very important indication of the Gospel is that the Twelve must not be content to preach conversion: their preaching must be accompanied, according to the instructions and example given by Jesus, by the bodily and spiritual care of the sick. He speaks of the concrete curing of diseases, … of purifying the human mind, … of cleaning the eyes of the soul that are obscured by ideology and therefore cannot see God, cannot see truth and justice. … The apostolic mission must always include two aspects: preaching the word of God and manifesting His goodness with acts of charity, service and dedication”.

“The Lord calls us all, distributing different gifts for different tasks in the Church. He calls us to the priesthood and consecrated life, and He calls us to marriage and commitment as lay people within the Church and society. … Two complementary paths that illuminate each other, enrich each other and together enrich the community. … The Lord bountifully sows His gifts, He calls you to follow Him and to continue His mission today”.

“I propose you intensely live the Year of Faith, which will begin in October, fifty years from the opening of Vatican Council II. The conciliar documents contain an enormous wealth for the formation of new generations of Christians, for the formation of our consciousness. Read them, read the Catechism of the Catholic Church and rediscover the beauty of being Christians, of being Church and enjoying the great ‘we’ that Jesus formed around Him, to evangelize the world: the ‘we’ of the Church, never closed, but always open and projected towards the proclamation of the Gospel”.