The Council of Cardinals: A New Constitution for the Curia 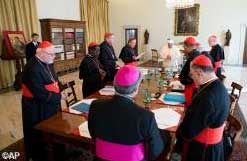 Vatican City, 3 October 2013 (VIS) – The reform of the Curia and the attribution of of more incisive role to the laity were among the principal themes considered yesterday afternoon and this morning in the meeting of the Council of Cardinals, instituted by the Pope to assist him in the governance of the Church, said the director of the Holy See Press Office, Fr. Federico Lombardi S.J., in a briefing with journalists. 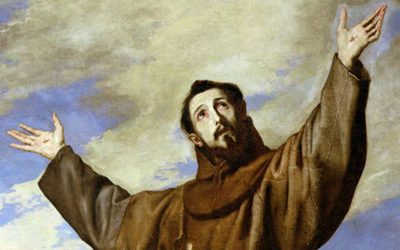 Vatican City, 3 October 2013 (VIS) – The reform of the Curia and the attribution of of more incisive role to the laity were among the principal themes considered yesterday afternoon and this morning in the meeting of the Council of Cardinals, instituted by the Pope to assist him in the governance of the Church, said the director of the Holy See Press Office, Fr. Federico Lombardi S.J., in a briefing with journalists.

Before commenting on the issues discussed by the cardinals, Fr. Lombardi referred to the words of the Pope at the end of the audience with participants in the meeting held to commemorate the fiftieth anniversary of John XXIII’s encyclical, “Pacem in terris”, in which he recalled the victims, currently numbered at 90, of the shipwreck this morning near the Italian island of Lampedusa. “In the light of this new tragedy”, he said, “we understand more clearly the value and meaning of the first trip of Francis’ pontificate”.

Moving on to the work of the Council of Cardinals, he stated that the Pope was present yesterday in the afternoon session, held between 4 and 7 p.m. “The Holy Father goes to pray at the Chapel at seven o’clock, and that is the end of their collaboration, although the the cardinals may join him together, if they see fit. This morning he was not present as he received in audience the participants in the meeting organised by the Pontifical Council ‘Justice and Peace’”.

The cardinals worked principally on the reform of the Curia. “The direction of their work would not indicate an updating of the apostolic Constitution ‘Pastor Bonus’, with retouches and marginal modifications”, explained Lombardi, “but rather, a new constitution with significant new aspects. It will be necessary to wait a reasonable amount of time following this Council, but the idea is this. The cardinals have made it clear that they do not intend to make cosmetic retouches or minor modifications to ‘Pastor bonus’”.

The intention of the cardinals is to emphasise the nature of the service on the part of the Curia and the universal and local church “in terms of subsidiarity, rather than the exercise of centralised power. The intended direction would be to put this into practice in the service of the Church in all her dimensions”.
Another important theme was the nature and functions of the Secretariat of State, which “should be the secretariat of the Pope; the word State should not give rise to doubt. This body serves the Pope in the governance of the universal Church. The meeting of the Council is very useful at the moment, in view of the directions the Pope will give to the new Secretary of State, who will assume his role shortly, on 15 October”.

Again in relation to the Curia, the Council will address the matter of relations between the heads of the dicasteries and the Pope, and co-ordination between the various bodies. “In this context, mention was made of the role of a ‘Moderator Curiae’ (moderator for the Curia), and the functions of such a figure. The issue was touched upon but no decision has been made as to whether it will form part of the new constitution; however, it is in fact one of the hypotheses suggested by the Council”.

With regard to a possible reorganisation of the administration of temporal goods, the cardinals touched upon this matter but without exploring the theme in depth, since they are awaiting the “reports of the referring commissions on the matter, who will communicate the results of their work [to the Council]”.

The question of the laity merited “significant attention” from Council members, as they had received many suggestions and questions on this subject from their various areas of origin. “When dealing with the reform of the curia and its institutions, the Council also plans to give more specific attention to issues relating to the laity, so that this dimension of the life of the Church is properly and effectively recognised and followed by the governance of the Church. Now there is a Pontifical Council for the Laity, but it is still possible to think of ways of strengthening this aspect”.

This morning, in view of the preparations for the next Synod, debate on the matter was reopened.

Finally, Lombardi said that yesterday no date had been set for the next meeting of the Council, although mention was made of a meeting in spring next year, of an informal nature. “The intention”, he concluded, “is to continue, without waiting for too long. Also, it would be incorrect to assume that nothing happens between one meeting and another; the cardinals and the Pope continue to exchange opinions and messages, even in the absence of a plenary meeting of the Council”.