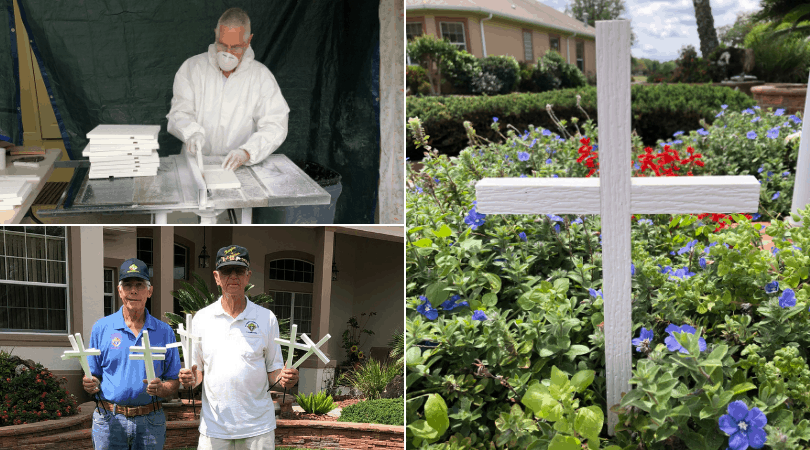 THE VILLAGES – John Breck is known as “The Cross Man.” He and his team from Knights of Columbus of the Queen of the Rosary Council 10034, out of St. Timothy Parish in Lady Lake, have made more than 22,000 crosses that are currently in yards in at least six states. Surprisingly, the effort was inspired by an atheist.

Breck has been a knight since 1975. Four years ago, he saw a white cross in a neighbor’s yard and asked about it. He learned it came from a town in Michigan. Years prior, the city of Frankenmuth dealt with a controversy over two crosses on a local bridge. A resident, who was an atheist, insisted the crosses be removed. The town complied assuming that would be the end of it. But the removal emboldened the man to insist that the cross be taken off the city shield as well. In a public outcry, residents all over the city planted small wooden crosses on their lawns. Seeing hundreds of crosses as he drove through neighborhoods, the silent protest made an impact and the man retracted his request.

After hearing the story, Breck enlisted the help of Francis Robacker in 2016, a fellow industrial arts teacher who had a woodshop at home. The two made the first 100 crosses (1 foot high and about 8” wide) and distributed them through the Knights of Columbus, their parish and other Christian churches. Word got out and, in just a few weeks, they had gone through the first set and had requests to make more. His crew has since grown to meet the demand.

After about 500, the team switched to plastic because it was already coated, white and more durable. Breck’s friend and St. Timothy’s parishioner, John Murray, lives on a busy street in The Villages. He estimates he has given out close to 1,000 crosses simply by leaving 8-12 on his front lawn for the taking.  He says the crosses represent “religious freedom.” “(The ministry) is tremendous,” says Murray. “A lot of people talk about doing something like that, but don’t do it. He did.” Murray believes it is making a difference.

“The crosses symbolize you’re a Christian,” said Breck who admits he is not always comfortable evangelizing through dialogue. “I’m a firm believer. I believe in Christendom,” he said.  “We’ve got to do something in this country to bring people to the faith, especially the young people. I’m just doing my small part. Hopefully it will spread.”

With 22,000 crosses from Florida to Maine, and some people now making the crosses themselves, Breck’s hope has become a reality and a strong witness of faith.