The Holy Robe, Symbol of the Church’s Indivisible Unity

Thousands of pilgrims are currently converging on the cathedral of Trier, Germany, for the fifth centenary of the first public display of the “Heiliger Rock”, said to be the Holy Robe which Jesus wore before His crucifixion and for which, according to the Gospel of St. John, the Roman soldiers cast lots. 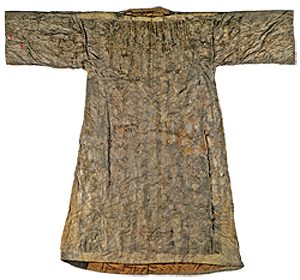 Thousands of pilgrims are currently converging on the cathedral of Trier, Germany, for the fifth centenary of the first public display of the “Heiliger Rock”, said to be the Holy Robe which Jesus wore before His crucifixion and for which, according to the Gospel of St. John, the Roman soldiers cast lots.

According to tradition, part of this robe was found by Helena, mother of Constantine the Great, who gave it to St. Agricius, archbishop of Trier. The faithful were able to see it for the first time in 1512 when the emperor Maximilian I asked Archbishop Richard von Greiffenklau of Trier to put it on public display.

For the inauguration of the pilgrimage, which will last until 13 May, Benedict XVI has sent a message to Bishop Stephan Ackermann of Trier. The document bears the date of 6 April, Good Friday.

The Holy Father recalls how St. John says that the tunic was a single seamless piece of cloth, for which reason the soldiers decided not to tear it but to cast lots. “The Church Fathers saw in this the unity of the Church, founded as one indivisible community by the love of Christ”, the Pope says. “The Savior’s love brings together that which has been divided. … Moreover, the Robe of Christ is ‘woven in one piece from the top’. This too is an image of the Church, which lives not thanks to her own efforts but because of the action of God. As one indivisible community she is a work of God, not the result of man’s abilities. At the same time, the Holy Robe is a monition to the Church to remain faithful to her origins, in the awareness that her unity, consensus, effectiveness and witness … can only be a gift of God”.

Finally, the Holy Father writes, “the Holy Robe is not a toga, an elegant garment expressing a social function; it is a modest habiliment which serves to cover and protect the person wearing it, to protect his propriety. It is the undivided gift of the Crucified Christ to the Church which He sanctified with His blood. For this reason the Holy Robe reminds the Church of her own dignity. … We must be constantly open to conversion and humility, in order to be disciples of the Lord in love and truth. At the same time, the special dignity and integrity of the Church cannot be sold short and abandoned to the clamor and the summary judgment of public opinion”.

Concluding his message the Pope notes that “the jubilee pilgrimage has taken as its motto an invocation of the Lord: ‘Lead to unity that which is divided’. We do not want to be isolated. We want to ask the Lord to guide us on the shared path of faith, to make it live again for us. In this way – growing together as Christians in faith, prayer and witness, and amidst of the trials of our time – we will be able to proclaim His magnificence and His goodness”.