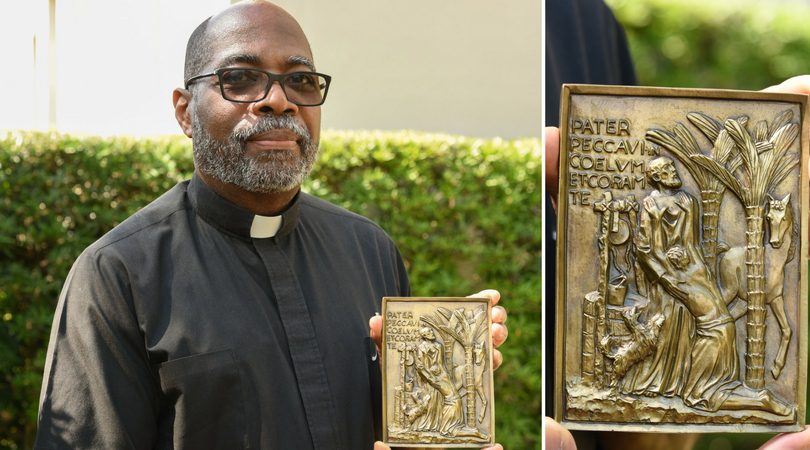 While in Rome, Fr. Anthony Aarons received a replica of a panel on the Holy Door of Mercy. It reads, “Pater peccavi in coelum et coram te” – Latin for “Father, I have sinned against heaven and you.”

Fr. Anthony explained Pope Francis gave this plaque to each Missionary of Mercy as a reminder that they are like both the father and the son in the parable of the prodigal son – the reading shows God’s unconditional love and forgiveness.

The Holy Door of Mercy holds special meaning for the Missionaries of Mercy. The missionaries were originally assigned to serve during the Year of Mercy, but Pope Francis extended their ministry because of the many testimonies of conversion attributed to their service.

A holy door has been used since the fifteenth century as a ritual expression of conversion. Pilgrims and penitents pass through it as a gesture of leaving the past behind and crossing the threshold from sin to grace, from slavery to freedom, and from darkness to light. Often these rituals are associated with prayer, pilgrimage, sacrifice, and confession. But the door finds meaning only when the believer associates it with Christ. Jesus is the Door! In the words of Pope Francis:

“There is only one way that opens wide the entrance into the life of communion with God: this is Jesus, the one and absolute way to salvation. To Him alone can the words of the Psalmist be applied in full truth: ‘This is the door of the Lord where the just may enter.’” (Ps 118:20).