In this season of Easter hopefulness, we feature the inspirational film: “The Mighty Macs.” 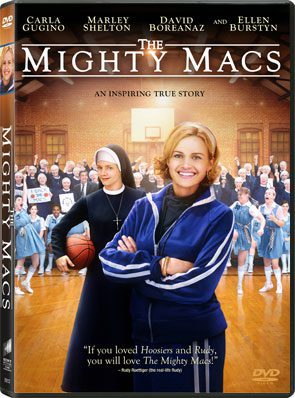 In this season of Easter hopefulness, we feature the inspirational film: “The Mighty Macs.” The following review is an abbreviated version of Sr. Rose Pacatte’s column in this month’s St. Anthony Messenger magazine. Many thanks to Sr. Rose for her kind permission to reprint and revise her review! The Mighty Macs is set in the early 1970s, at the dawn of the women’s movement and just before Title IX programs for athletics were extended to women. The president and mother superior (Ellen Burstyn) of the small Catholic all-girls Immaculata College, northwest of Philadelphia, hires a new basketball coach, Cathy Rush (Carla Gugino). Rush, who is non-Catholic and newly married to Ed (David Boreanaz) discovers that the team has no uniforms or gym and that the school itself may soon be sold. But she takes on these challenges with sheer determination. Ed thinks that she is just trying to find a way to spend her time, but becomes confused by her dedication and their marriage suffers. Sister Sunday (Marley Shelton) is questioning her vocation and wants to request a leave of absence from the community. But Rush notices her interest in basketball and invites her to be the assistant coach. They become friends, and the young nun grows in her understanding of her own calling. With the energy and talent of the team, coaches and nuns, the Mighty Macs power their way to the first national championship in 1972. They would subsequently win in 1973 and 1974. “The Mighty Macs” is based on a true story, and the Immaculate Heart of Mary Sisters consulted on the film. Themes of hard work, faith, character and heart permeate the film. The acting is frank, open and moving. Cathy Rush, a breast-cancer survivor, was inducted into the Basketball Hall of Fame in 2008 with Pat Riley and Dick Vitale, and the little college is now Immaculata University. Order this DVD from the Media Resource Center @ click here, or call Dan Hardester or Diane Gallagher@ 407-246-4895 (or 4897).

(Dan Hardester serves as Secretary of the Evangelization Secretariat and Director of the Media Center.)